After the final crit today I got some good pointers about my logo design. People often said that the lines behind the design clashed with the type making it much less legible. Si, I went back and took out all the lines that were unnecessary to creating the Parallel theme. 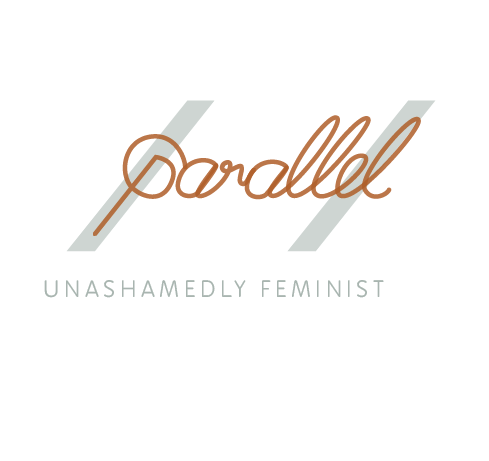 I am really pleased with the result and think I have found a keeper. It works in the web design format too. 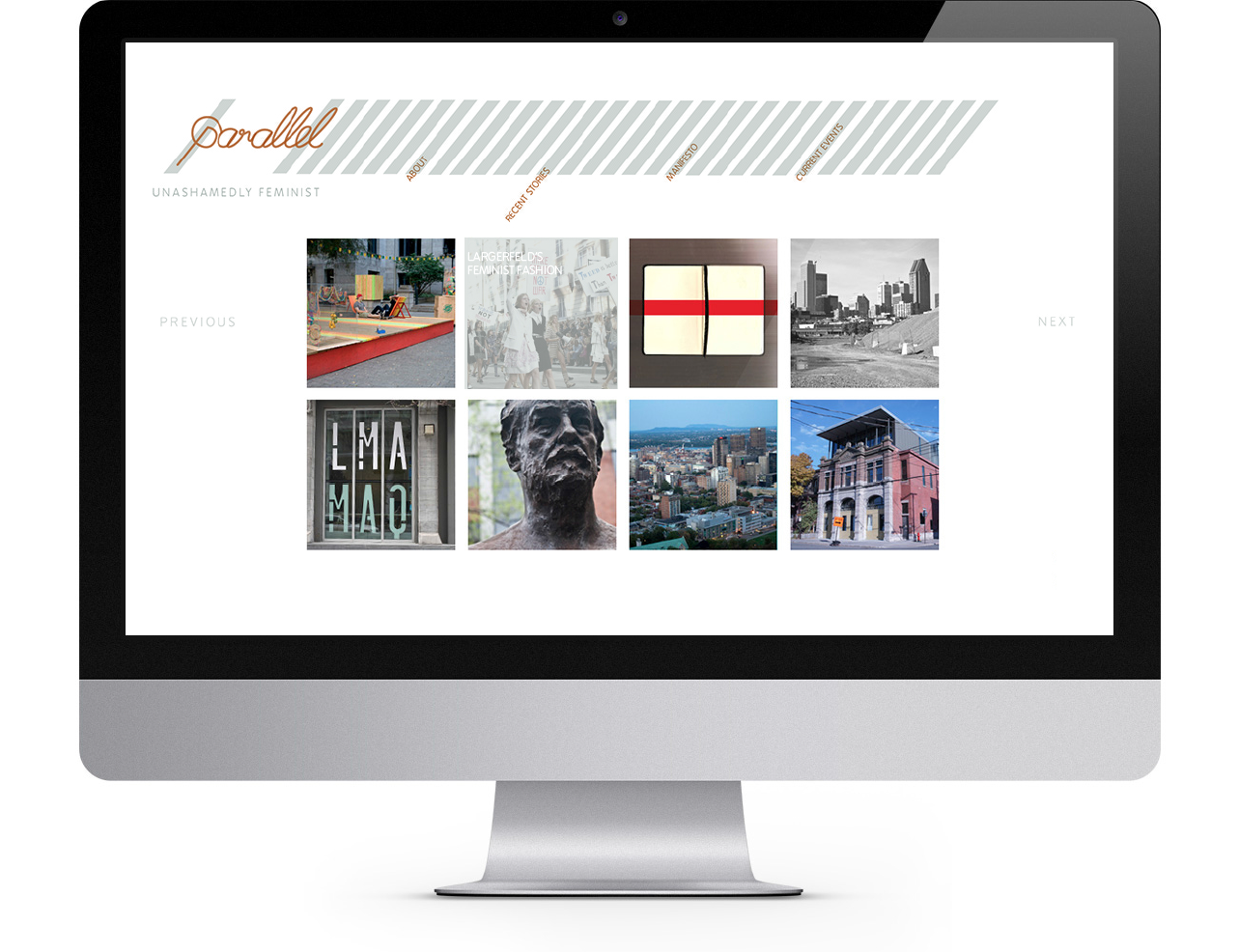 Mocking up this website also gave me an idea for establishing a theme that could help things work on the front cover. (soft squares of light opacity blue in the hue of the logo.) As you can see further below I have used it to make a paler cover picture work. The type in the navigation bar, acts like a tab, when hovered over they extend out of the lines to become fully visable. 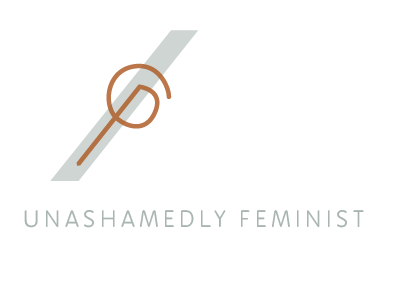 This logo also allows for great evolution. As you can see above I have already mocked up the next generation of the logo 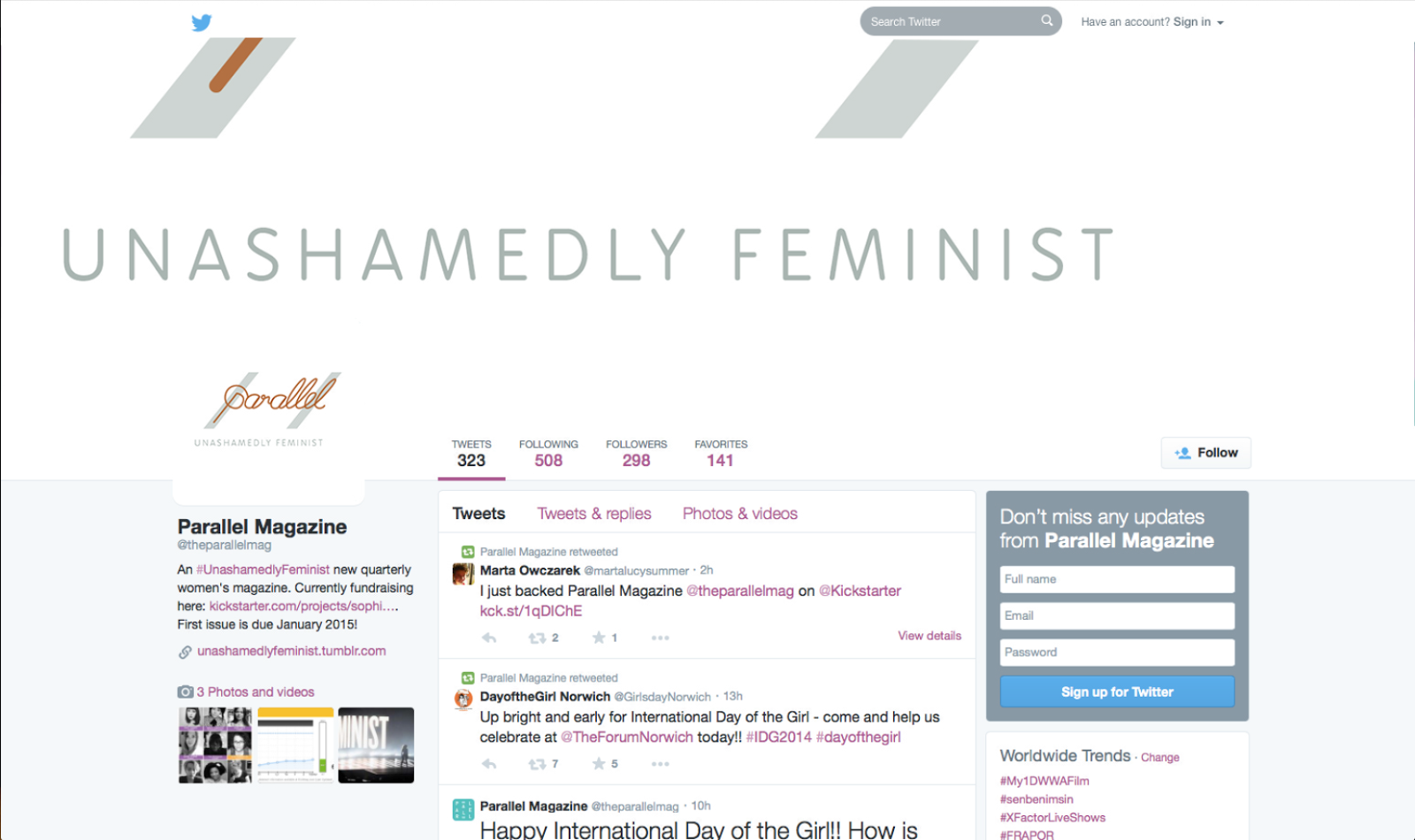 The twitter still works and I think the new logos use of space allows for an edgier look that fits better with the fresh approach to feminism. 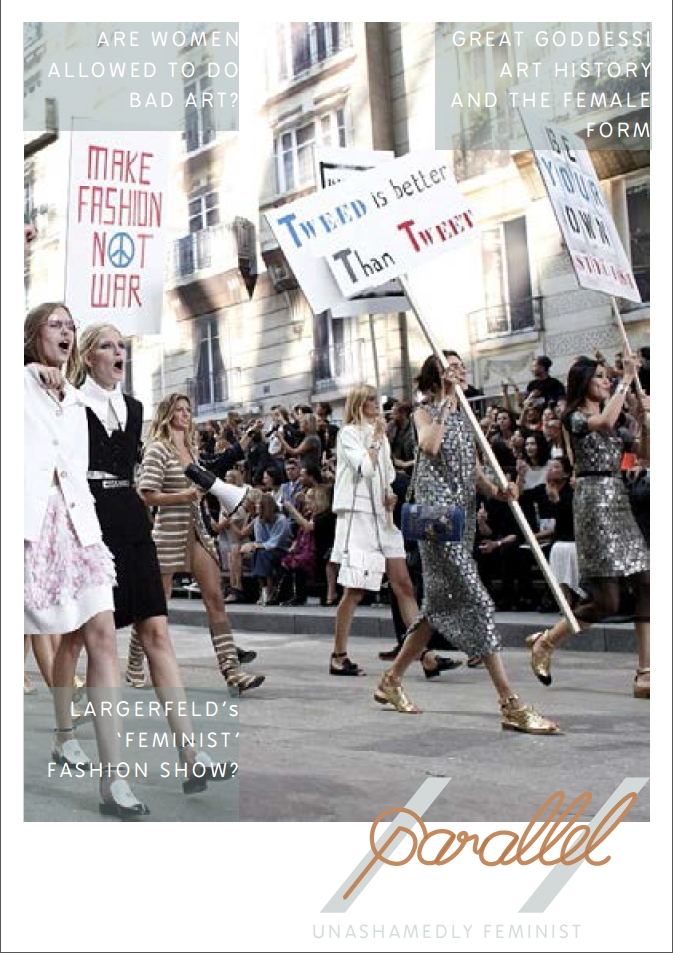 I also applied the page number design idea and it still looks great, if not better. I changed the photo because I was getting very frustrated with the poor quality and to be frank it just felt a bit cheap.

Evaluation:
I am really happy that I have changed the logo. It is so much more legible, which is so important for a brand that is just starting out. The striping back of the logo like this is something that I think I should do every time I have a branding brief, so that I can asses what is actually needed in a design. So, I suppose you could say that I am most pleased with the design process that I have followed during this brief, I really feel that I have learned a lot, both about branding and the expressiveness of simple shape and colour. The colour is something that I am particularly pleased with, simply because it is something that I have really struggled with before. My summer work has really proved useful in this respect by helping me to look at colours collectively as well as separately. In the end I quite heavily reduced the opacity of the colours, changing their nature quite a lot but using colours from plant colour schemes seems to be a really productive method. Especially when you consider that I was trying to convey the idea of something gender neutral-I used a lichen colour scheme, which is quite a gender neutral plant, unlike a rose or a daisy. The hand drawn type was quite a challenge because getting it to be legible was so difficult. It is shaped around my had writing, which was perhaps my first mistake. However, with much shaping and editing I think I got it to work. I really like the flexibility of this logo, provided particularly by the parallel lines. This shape is so simple that there are very few situations where it looks out of place, as shown by the web and twitter mock ups. Also the way it can be broken down into component parts, yet both can be a reference to the brand in a concise and effective way. One thing I would have changed would be printing it out much sooner, because everything looks different when printed. No paper can be as purely white as a screen as the opacity of the logo isn't quite as well registered on paper. However, I will go on to experiment a bit more with stock options to see if I can get the aesthetic I am looking for. The last thing I would change would be working around people more. I just work so much better when I can talk to people about what I am doing. To be honest this couldn't be helped so much because half of this brief stretched over the weekend but as soon as I got back into the studio things started to fall into place as i got feedback from everyone. Overall though I am pretty happy with what I have managed to do in a week.