Before I can fairly say that the current designs for parallel are bad I wanted to establish the moral values of parallel as a collective personality. So, I looked on their tumblr page and found a few bits and pieces that help explain this. 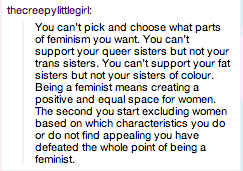 As you can see there is a definite slant on the all inclusive and general image positivity. Creating a space (metaphysically) that promotes discussion and understanding of one another as people, rather than simple indoctrination. 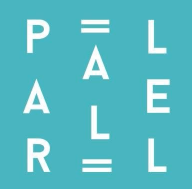 One thing that really gets to me about these graphics is the inconsistency. The colours are not maintained and the negative space type that is majorly used is undermined in the first logo you see in the video (at the top of the photos.) I don't think that the 'box logo' for the social media profile photo is at all legible and this is a must for a brand that is just starting out. I also feel like the colours are going against the all inclusive values that the promote. However, there is a distinct argument against this point in that the association of colours with genders goes against gender equality. However, this could also be said to miss construe the idea of gender equality. The genders must be equal but not necessarily the same. I also think that the type isn't quite right. It seems that it is attempting to be quite masculine but I think the way this should be produced is to take traditionally feminine shapes, something as simple as a curved line, and make it visually strong and definite. As you can see for this little bit of analysis this project is a bit of a tight rope walk, but I am at least going to give it a go. As you can see from the list below they do already have graphic designers working for them so I need to be careful not to step on anyone's toes but I may well not get in contact with them about this although I will be donating.