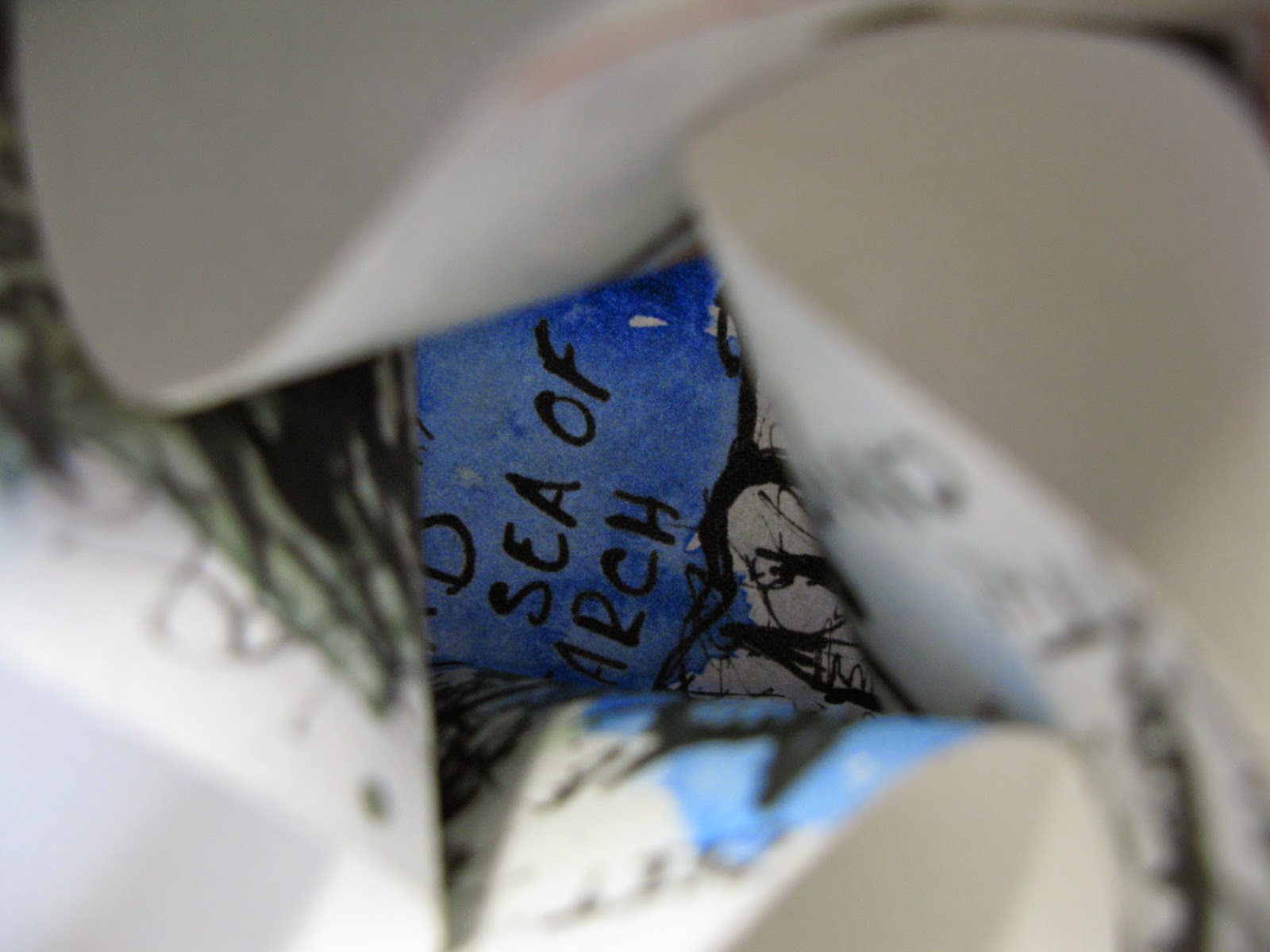 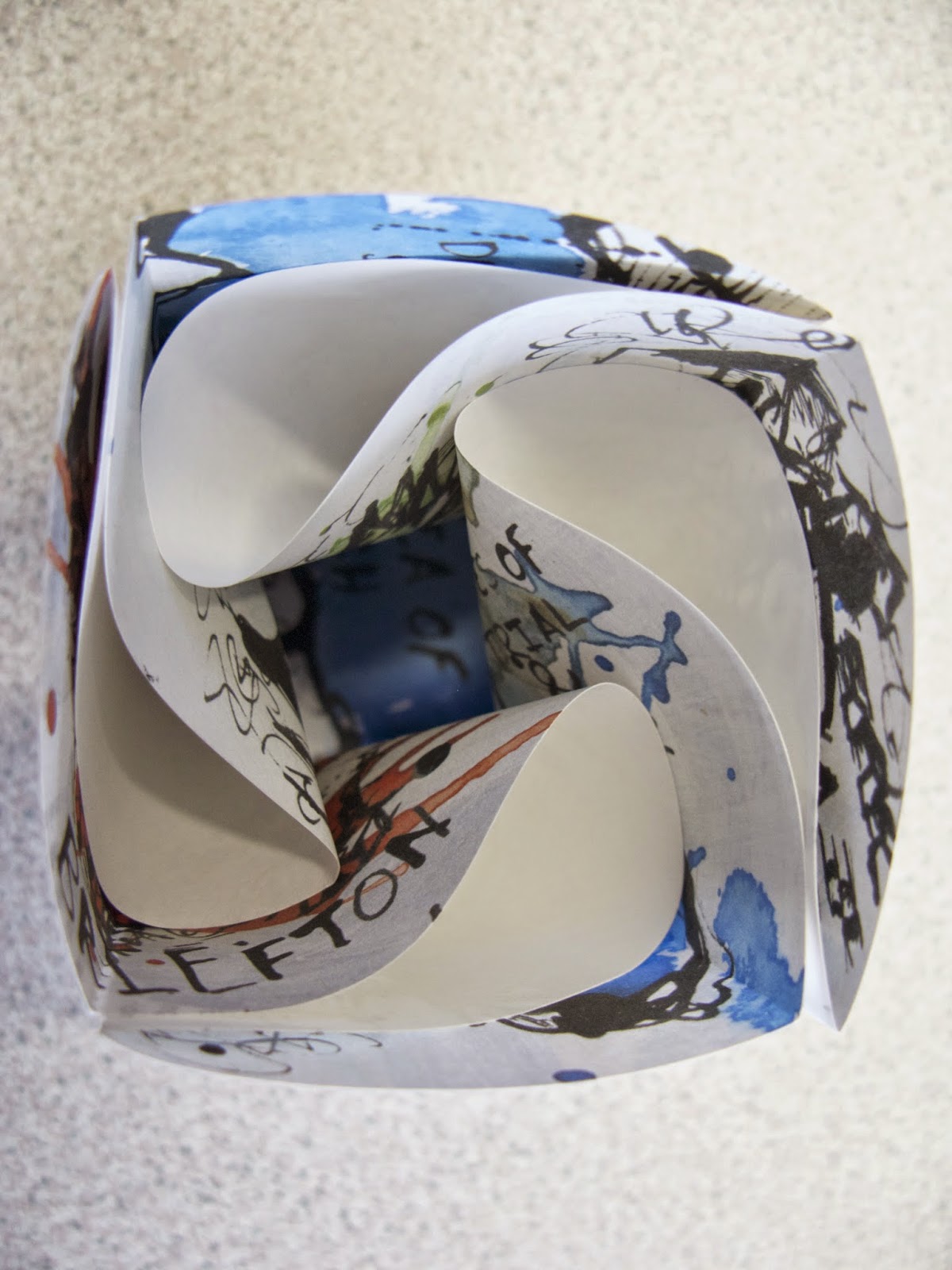 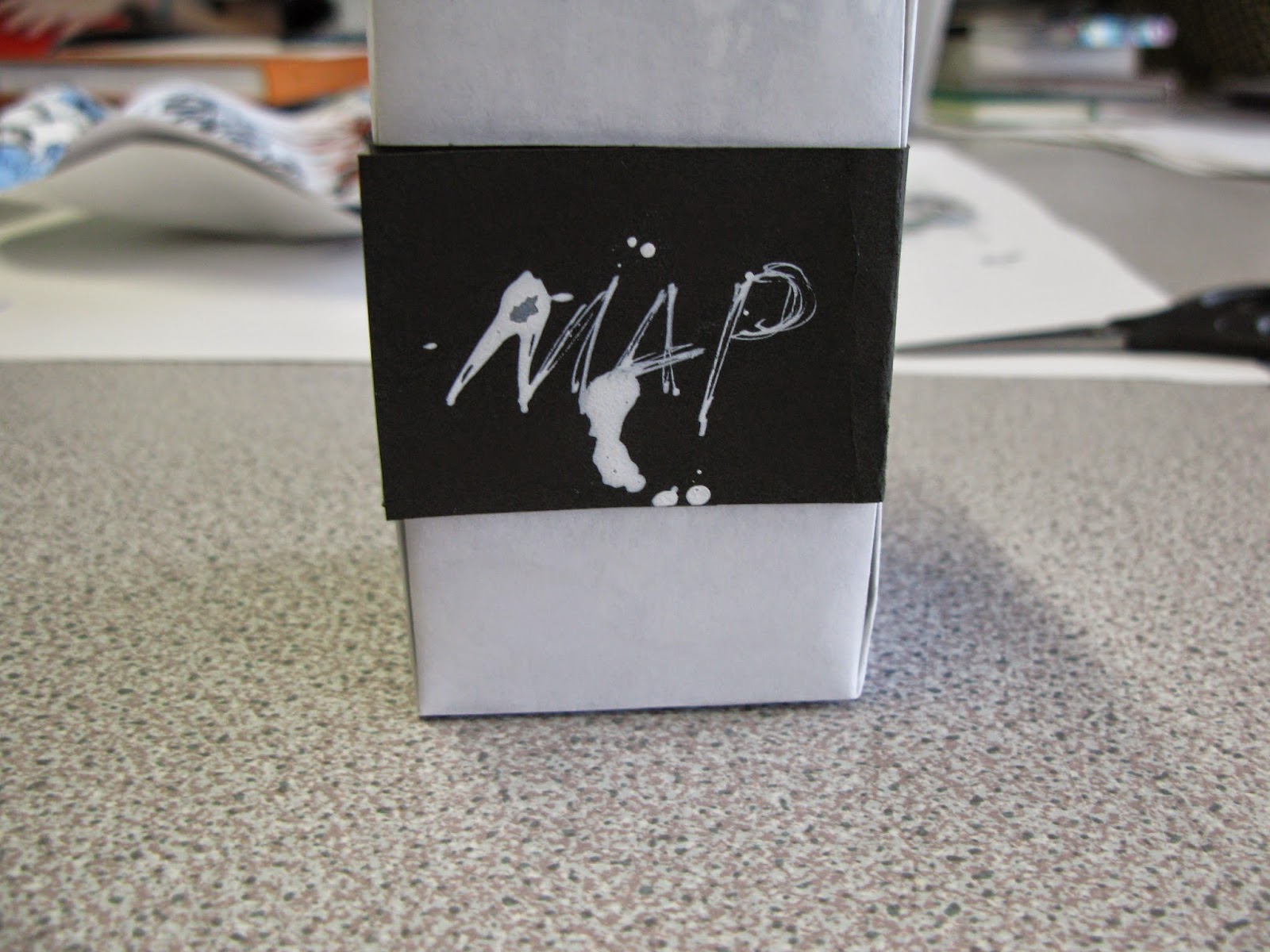 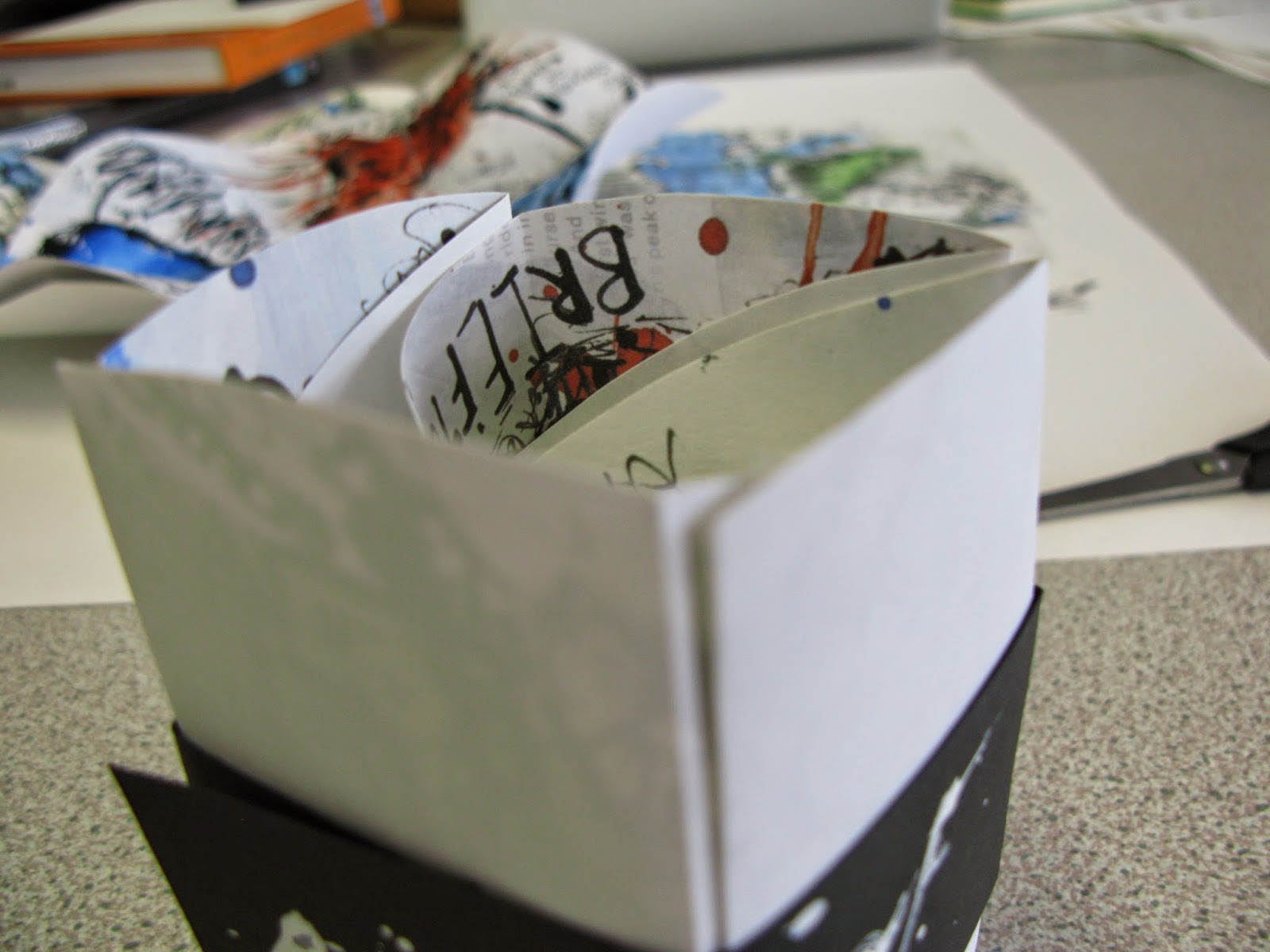 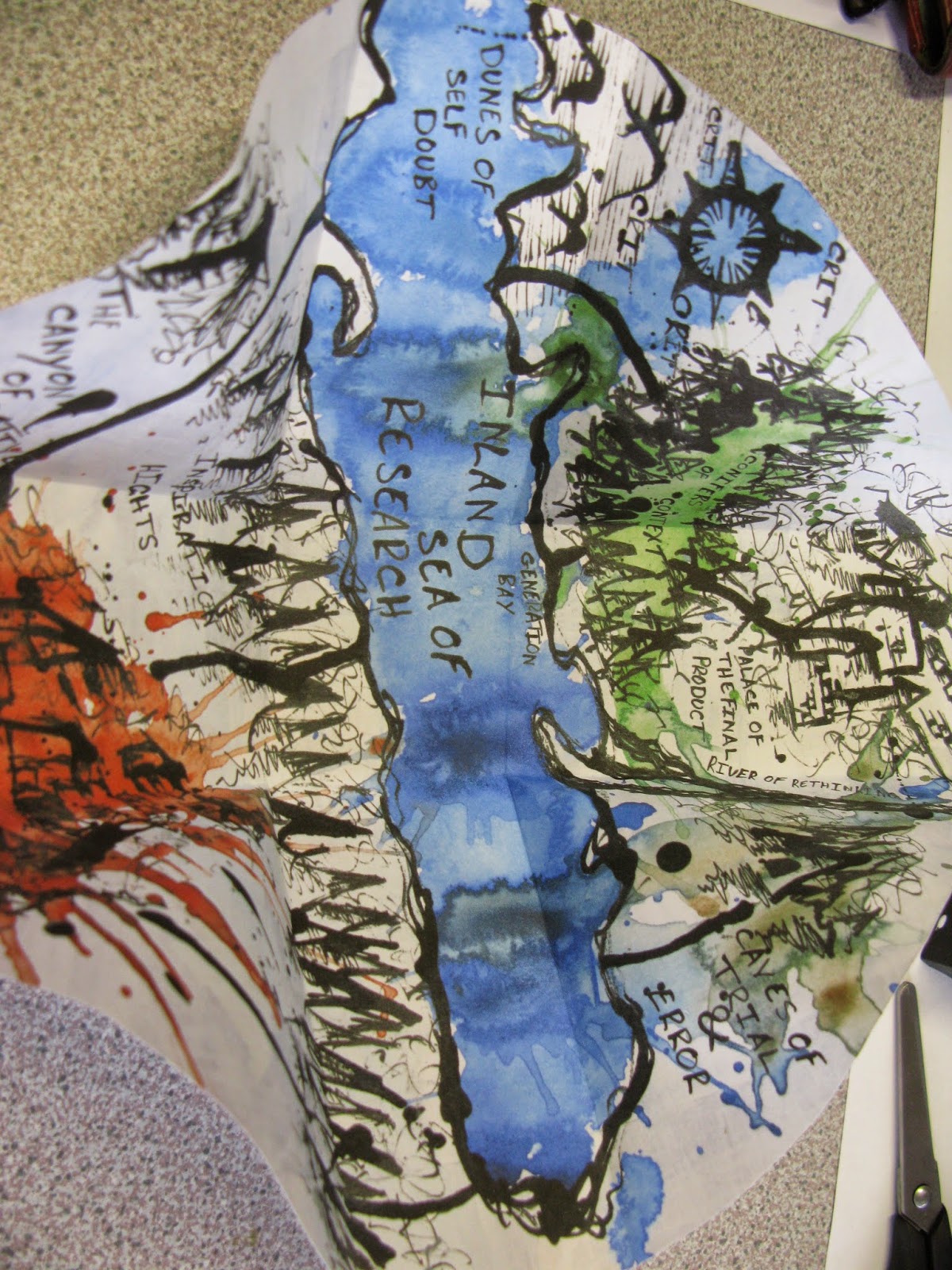 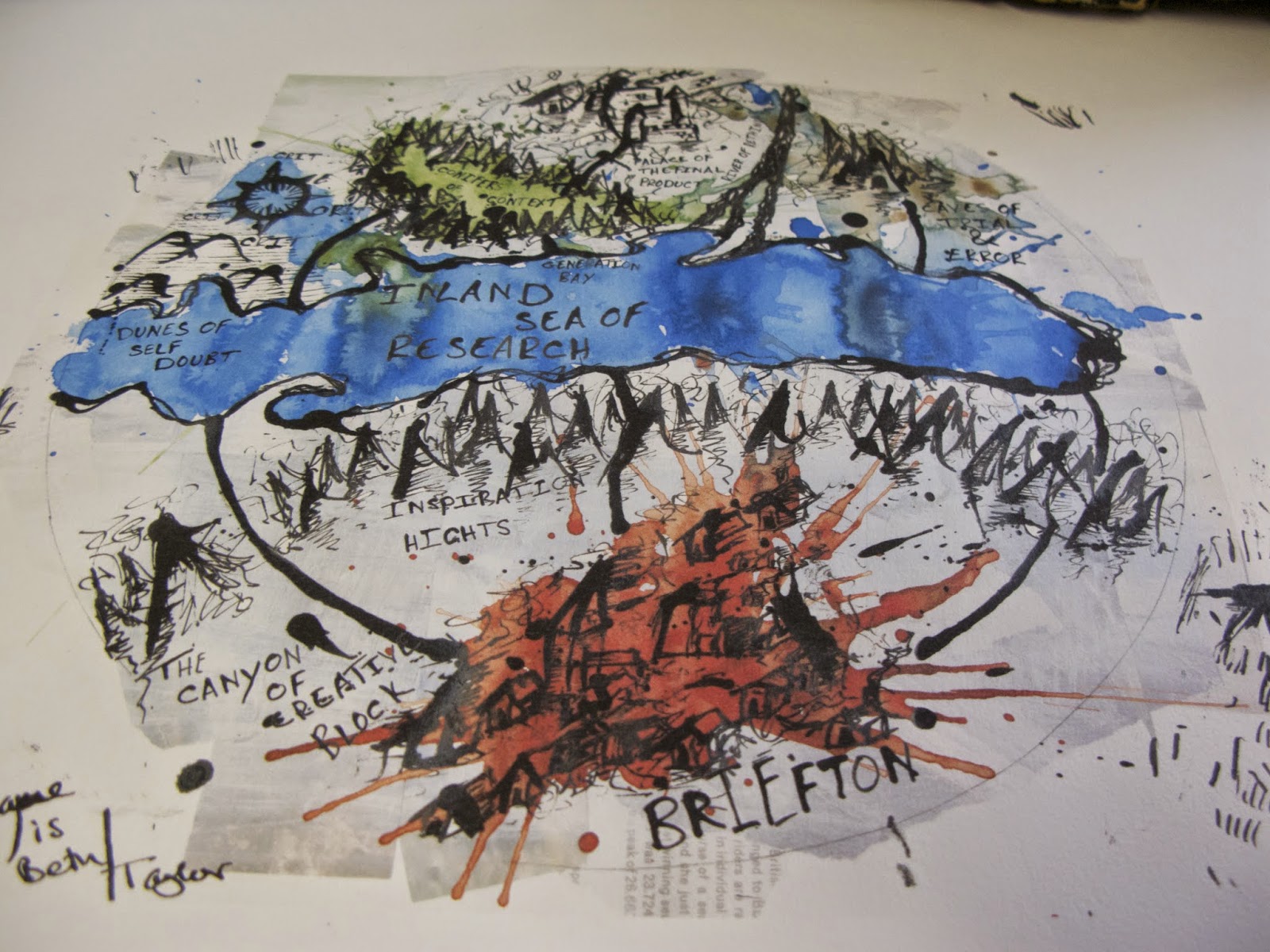 Overall I am pleased with the finished result of this project but If I were to do it again there are lots of things I would change. My decision to use cartridge paper as I did was completely warranted because all the experimentation I did proved that it was best suited out of what was available. However, if I had had more time I would have like to research paper with completely different qualities on either side. This way I could have had a smooth almost photographic finish on the outside and the watercolour paper texture I liked so much on the inside. I am uncertain if this is possible but I would have liked to see if it was. I am really happy with the fold I used. If anything I would have gone with something more complex and tat dictated the content more, but in the end I think the simplicity of this fold makes it work ergonomically in a way that a more complex one would not. The thickness of the paper and the definiteness of the folds means that when you go to fold it back up it knows where it needs to go, side stepping a problem tat a lot of people in the class wrangled with. If I had had extra time I would have liked to have looked at etching for the reproduction of this print. I know very little about tis process and would have used this project to expand on my knowledge but I do think that the mistakes and errors of such a hands on process would have added to the scruffy essence of the illustration in a complimentary way. The time limit on this brief was restrictive in that it allowed a limited amount of experimentation time, meaning that deciding which direction to go in with it was dusting because you have not got a chance to go back and change direction. However, for me I think the was useful because it stopped me from procrastinating and motivated me to try and make the direction I had gone in work. One ting I would definitely change would be the way I have scanned it. I thought it was a fairly straight foreword process but I found that the light emitted by the scanner reflected off the ink splotches leaving some of them looking like they had apparently faded when it came to printing. I talked to James in the digital print suit and he suggested using the scanners in there because they used two light sources rather than one, allowing greater detail to be picked up and less reflection to occur. I would also have liked to have the time to make the final product neater in its finish because I feel that it is just not good enough for a second year submission. however, at this stage all I can do is say I am aware of this and improve on this in the next brief. I would have really liked to have made more inventive use of the belly band format on a three dimensional object; as was pointed out by a friend they read all the way around from numerous points. I would have liked to have made a more inventive use of this than i have. It also means that the title doesn't always read well, this is something i would remedy had I a chance to go back. At a commercial level the production would be straight foreword, making it quite a feasible product. Simple high resolution digital printing or even litho printing would be used for the main graphic and the belly band and the folds would be achieved by the use of a custom made dye cutter, all things readily available in the commercial printing world. Although there are many rings I would change about this product, I am glad I took risks on this brief and really learnt about my abilities as an illustrative designer and i am most proud of how different mine looks compared to others in the class (not that it's better) but I always think it is good to strive to differentiate from the road and strive to be different.