When I first made the box leaflet design it was with newsprint. This was because I don't want to waste any god stock. However, I found the the lightness of the paper made for loverly curves within the box. One problem with this design is the way that it doesn't stay together on its own. This can be easily solved with the use of a belly band or similar. I love the way this design fit perfectly with the concept I set out to convey. I wanted to suggest the idea of organic processes on the inside, encased by something relatively clean cut. This was intended to emulate the way someones thought process may seem simple on the outside and I think mine definitely can seem logical and sensible, when in actual fact my design process has more of a sentience of its own which is much more free formed and liquid than it may appear from the outside. I have also zeroed in on the idea of using a box of some description because an idea that I always return to in my design process is to create a box to think outside of. For me this is what makes graphic design so exciting. It takes the restrictions of context and cost so disdained in the creative world and runs with them, makes them amazing and engaging and in a sense, by making the proverbial box somewhere great to be, it destroys it. This is why I think that a box structure for my leaflet is perfectly apt. On a practical level this design is good because it can be very easily printed and a very simple die cut would ensure that it would be commercially viable. Also, although I tried more complex folds, a problem that I continually encountered was folding them back up. Getting them to go back into place was difficult, which would make it impossible for someone coming to the leaflet fresh. SO, the simplicity of the folds in this design mean tat it opens and closes very easily and in a way that is almost instinctive which i really like. 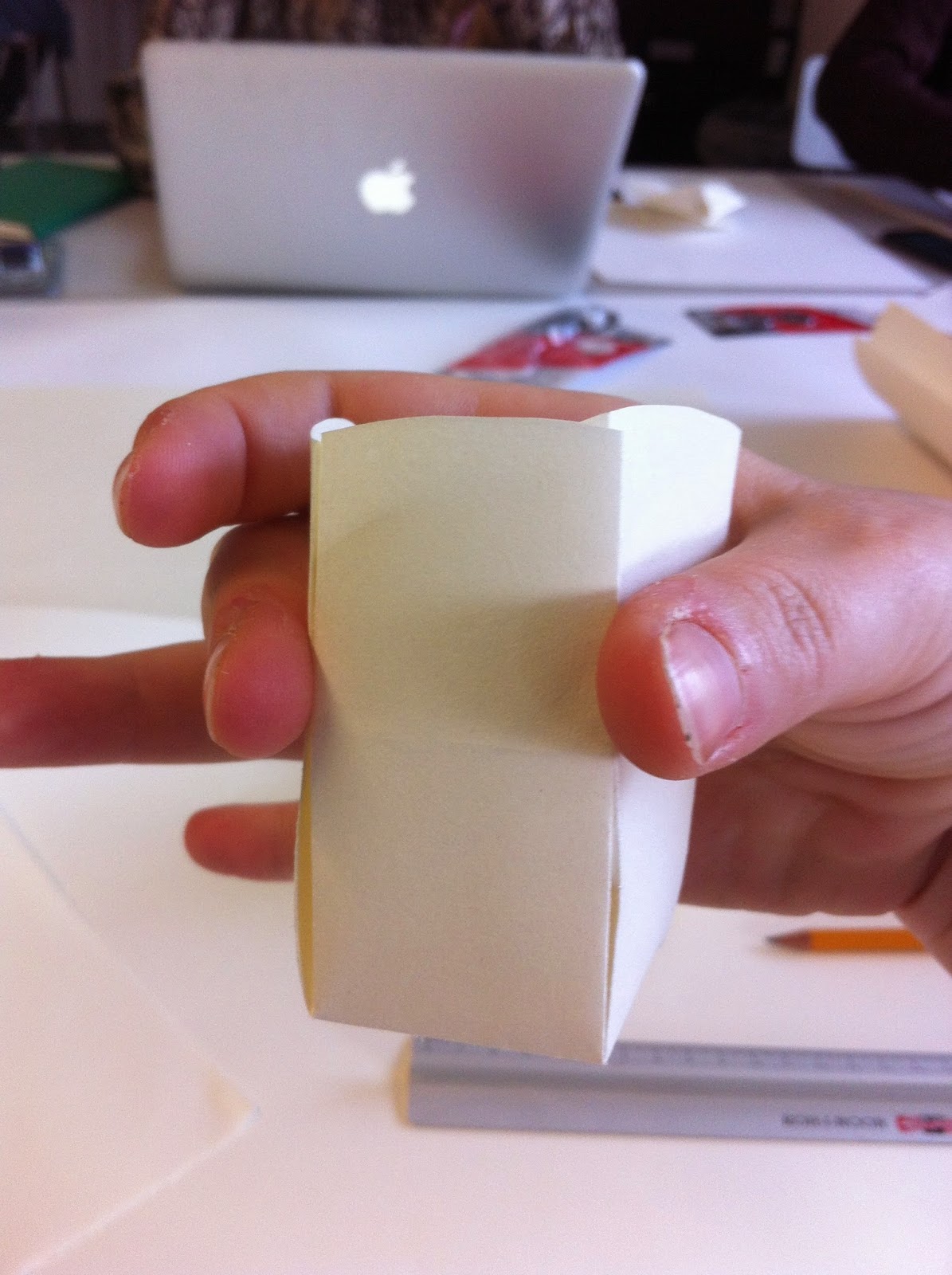 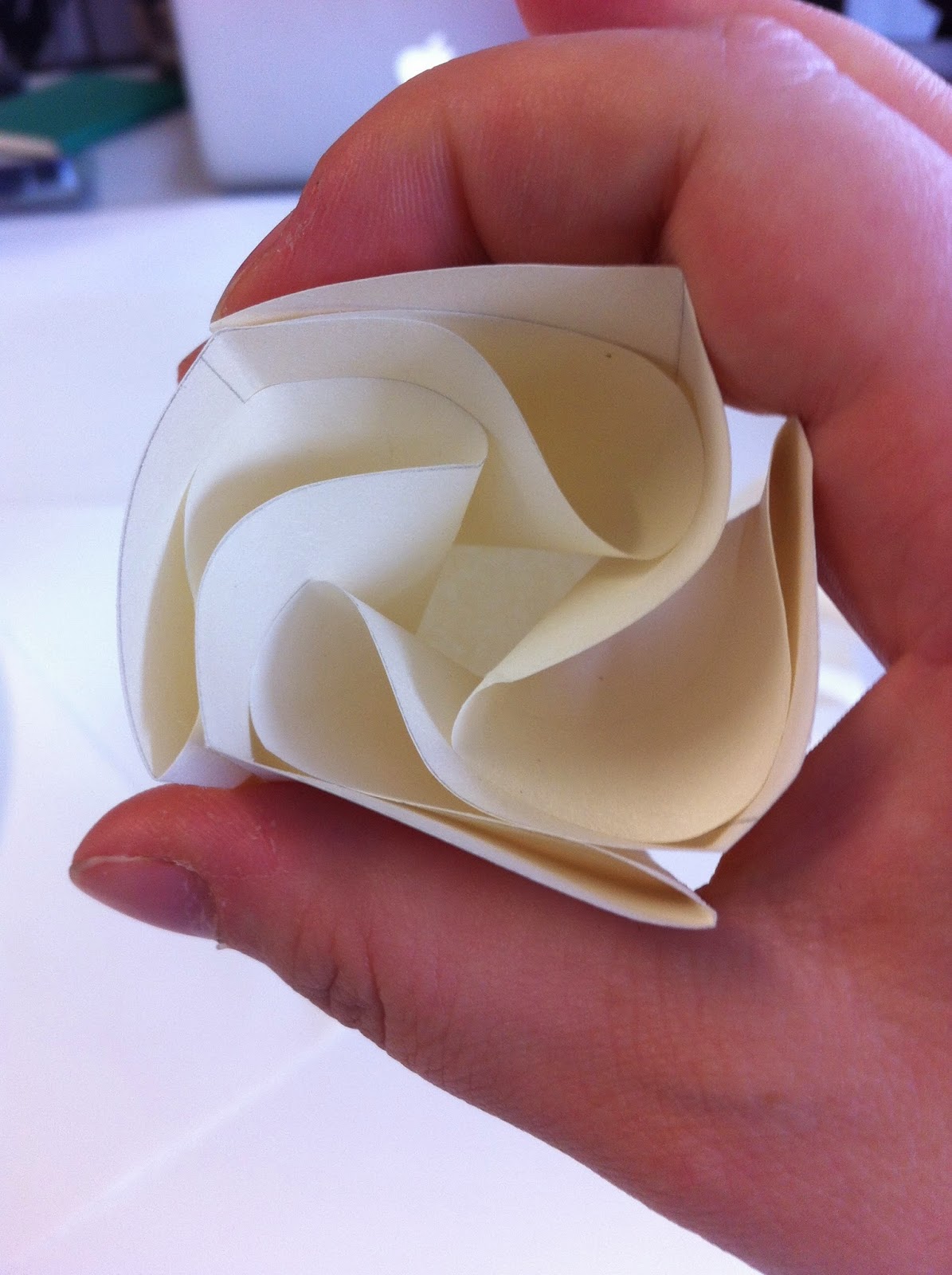 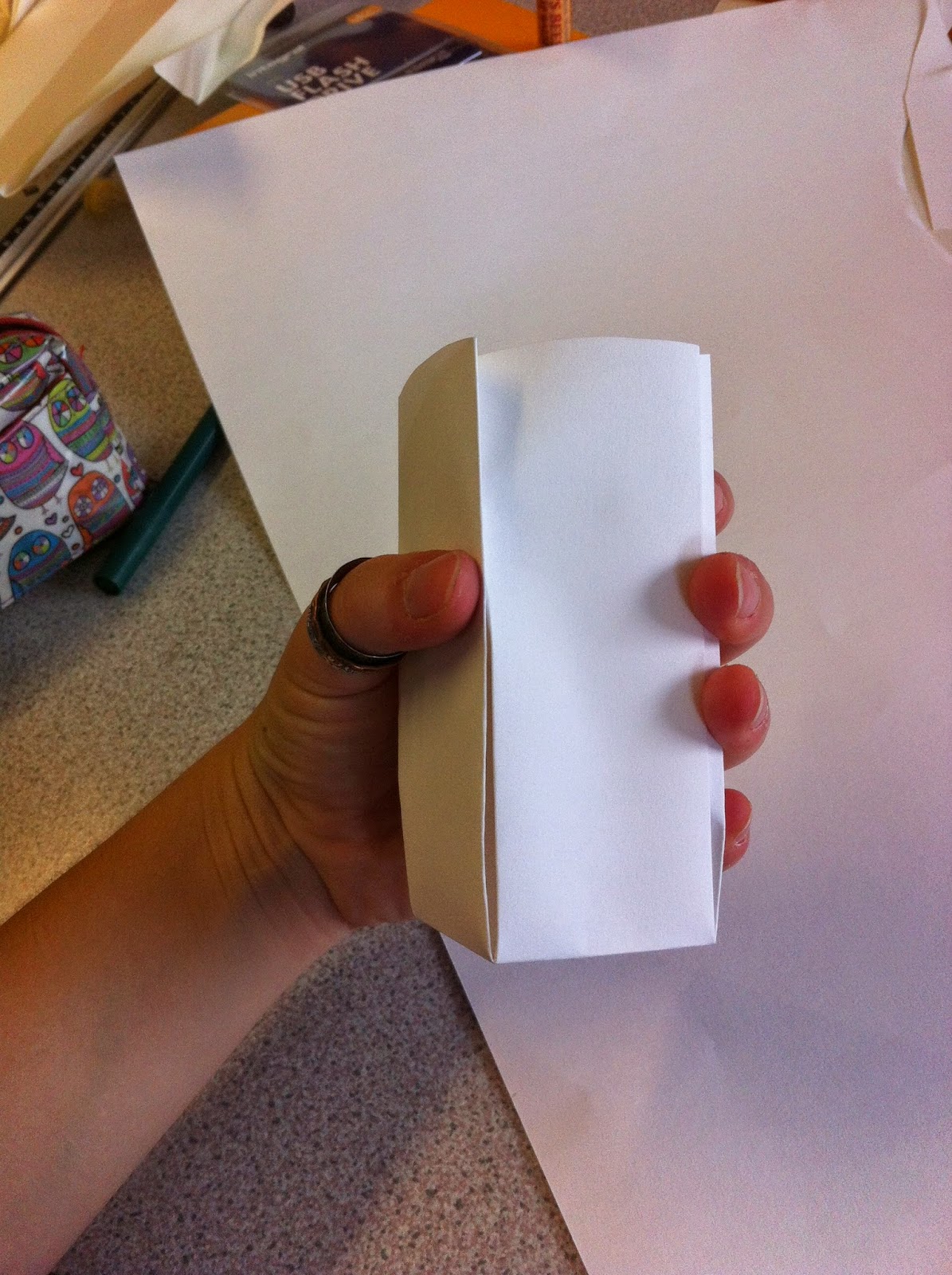 After I ad found a design I liked I went on to create it in a stronger stock in the hope that it might be more likely to hold together better. However, The paper would not fit into the centre in the same ay as it had previously done. Tis seemed to be a combination of the thickness of the stock and the ration of the base size and the box hight being wrong (the curved folds were too big to be contained by the box). 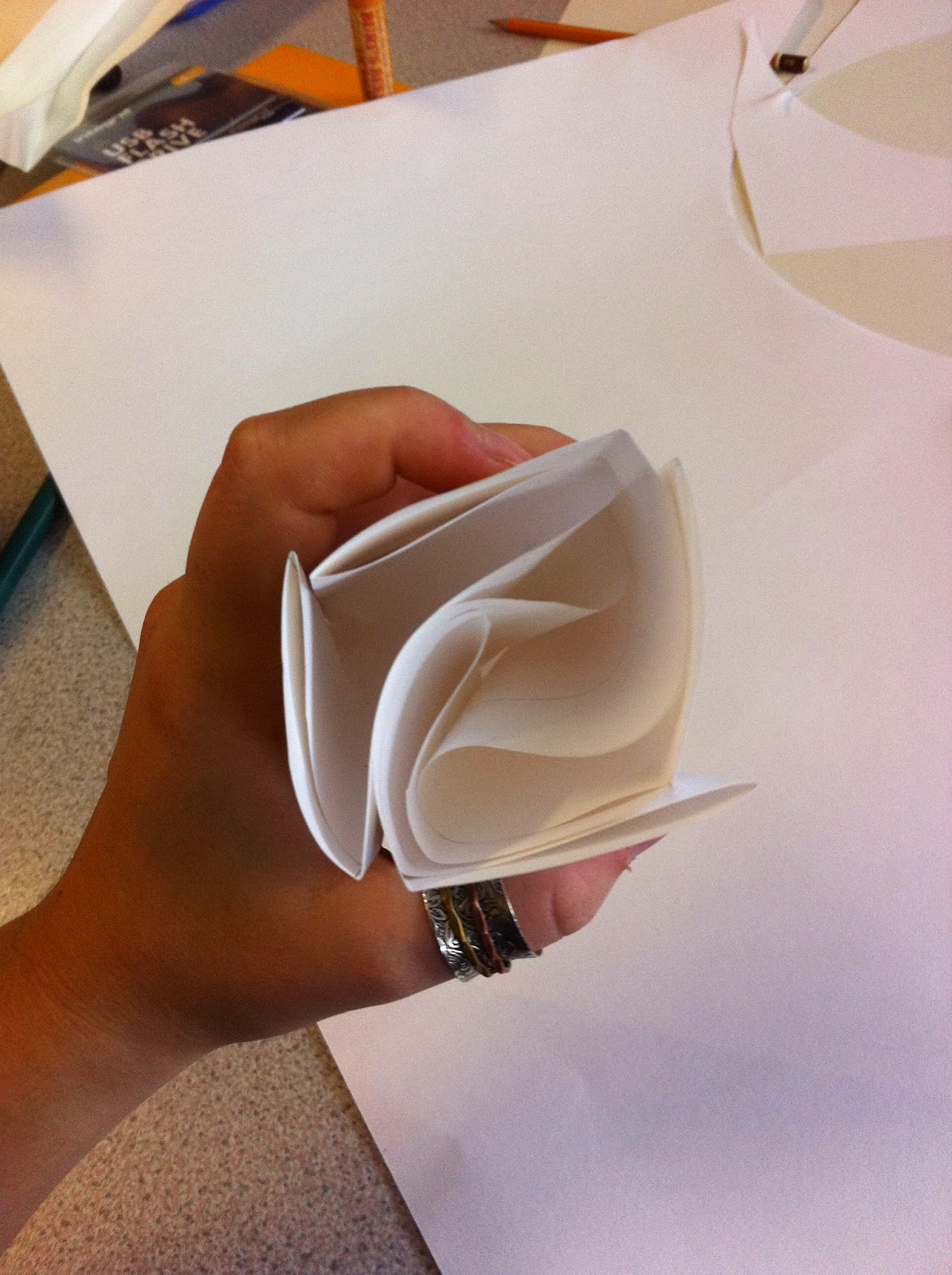 Be cause I needed thick stoke for the outside of the box but thin for the curves on the inside I tried melding together two papers. One the cartridge that I had tried earlier and the other tracing paper. 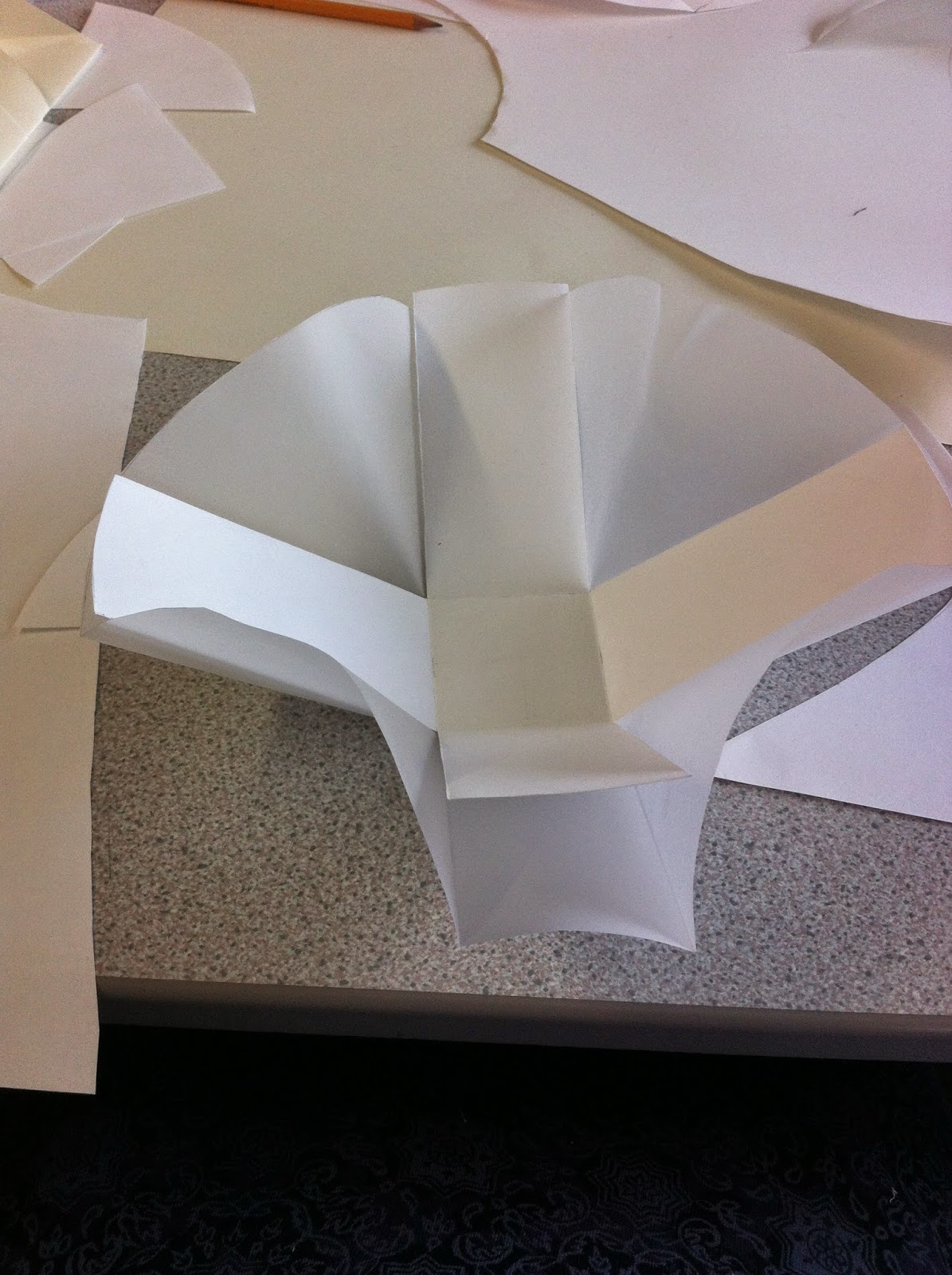 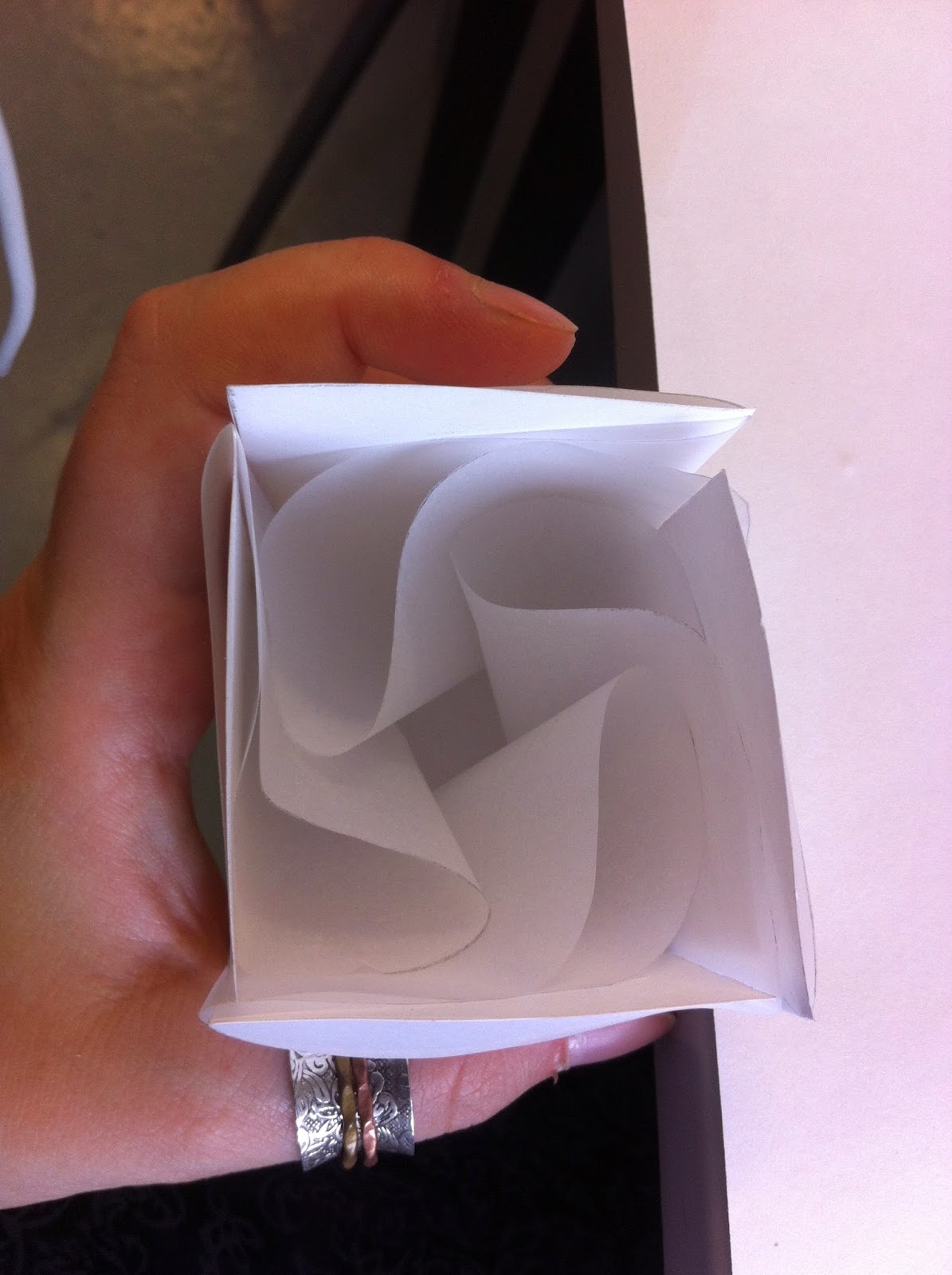 Although this looked good and worked reasonably well, it would look really strange to put some of the content of the leaflet on the tracing paper, which is such a large fraction of the surface that It would have to be integrated into the design in a very clever way that worked with the concept of the piece. 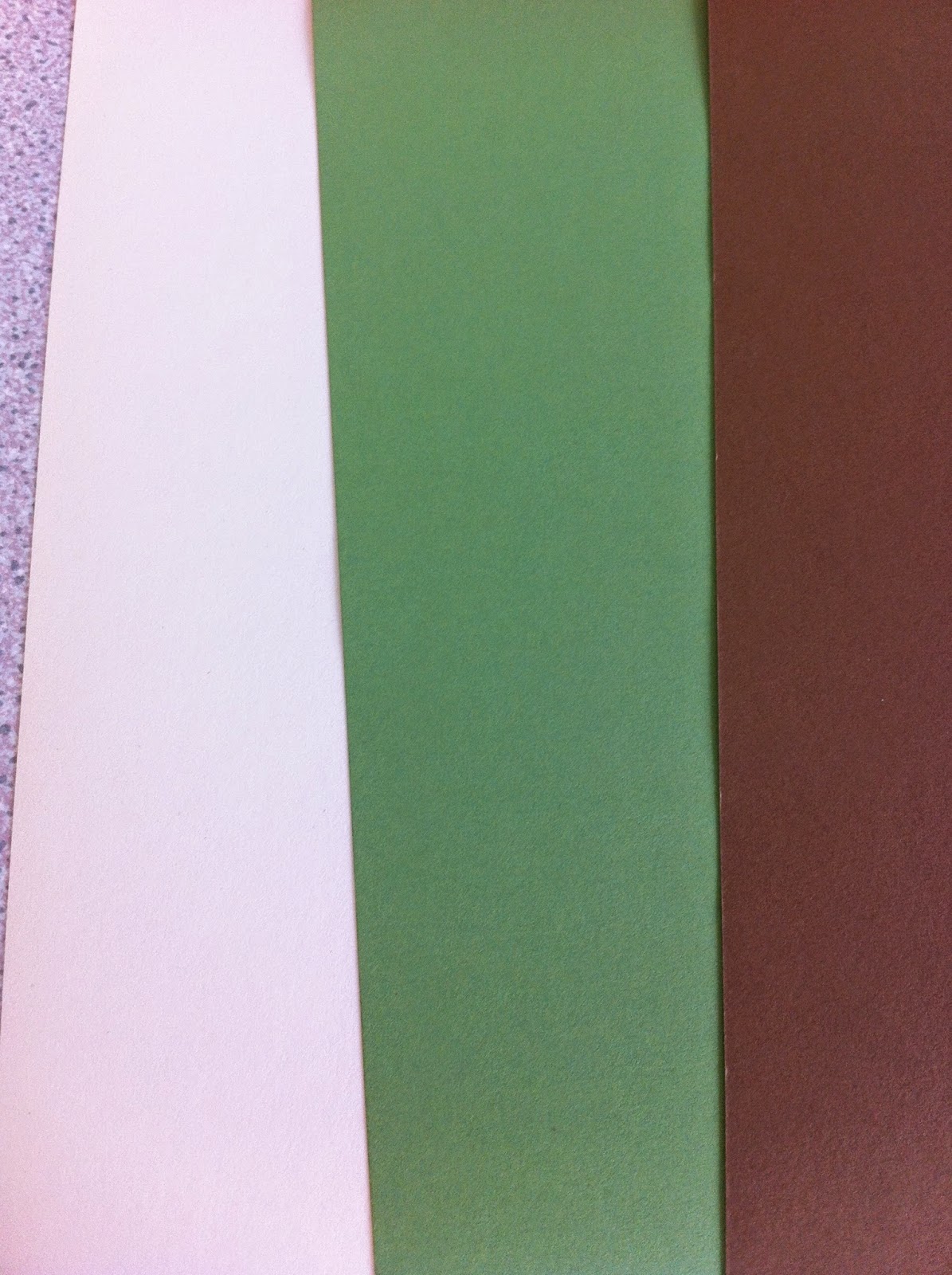 I then went and got some more paper to experiment with, some coloured sugar paper and some davy news print. As I tried out the heavy newsprint I also tried out some edging, just to see if adding to the curves on the inside of the box might work visually. I used botanical theme because when talking to others in the class I asked if going down that route was a bit predictable for me, they said tat when they saw something botanical and hand drawn they instantly thought of me. Because part of the brief was to communicate my style I used some flowers and rouge patches of grass. I think this is because I am not policed in any way and it needs to be a bit scruffy. I also think that this suggests the organic nature of my design process and the way it grows with each brief. 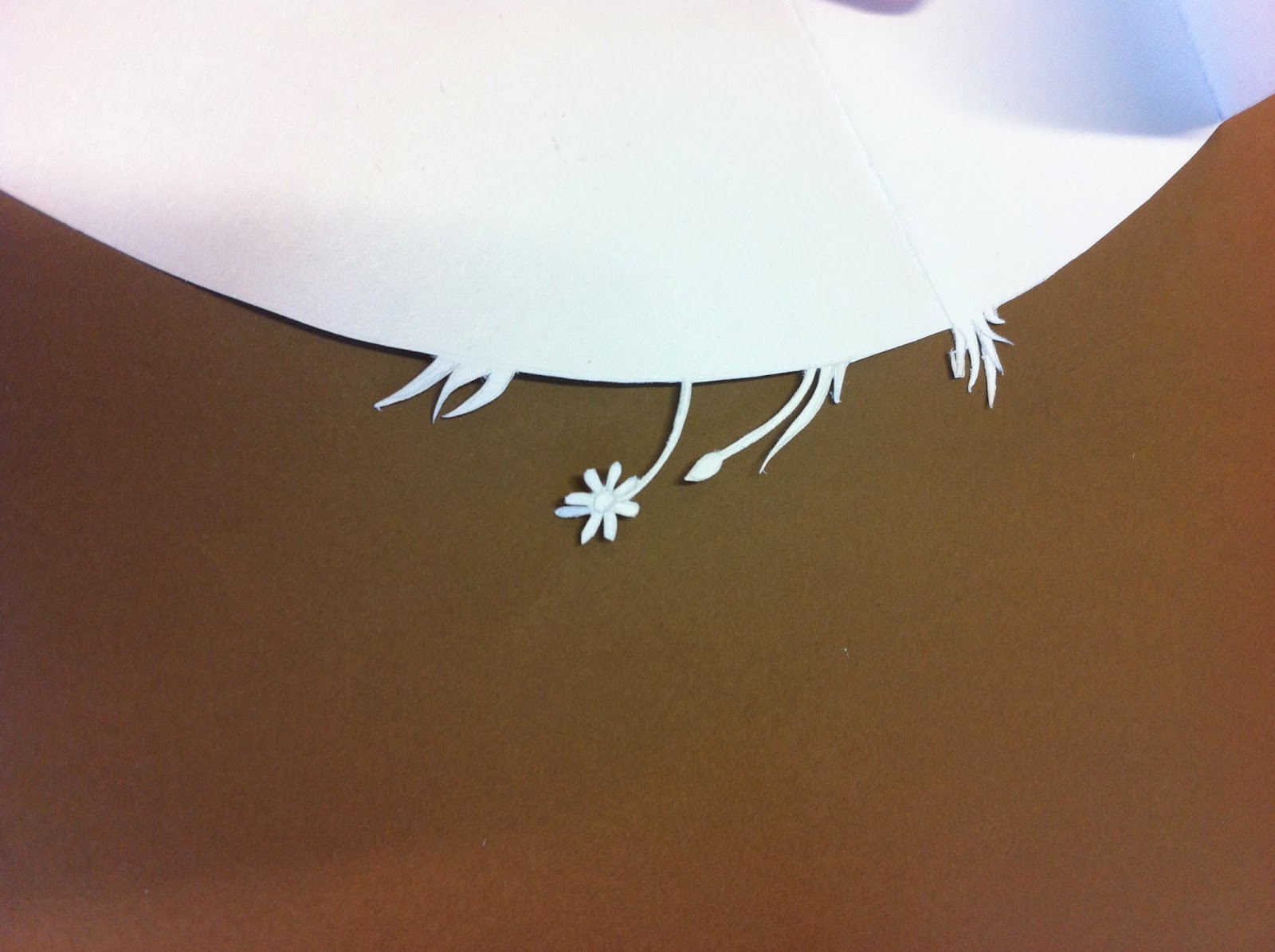 I only did a small section to see what it would look like. 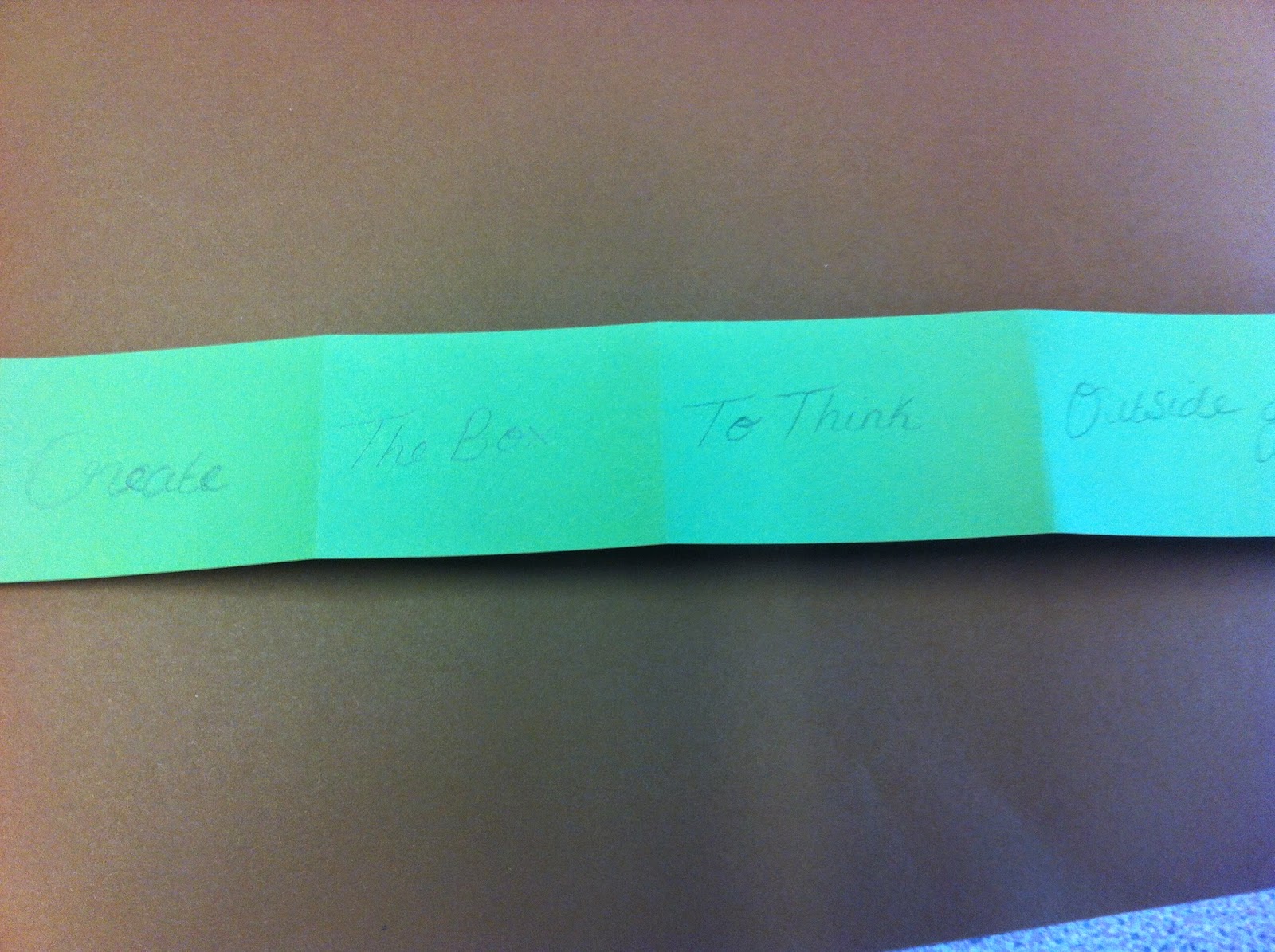 I also made a very basic belly band to keep the leaflet together. I chose green to stick with the organic theme and it also happens to be my favourite colour. I also had a thought as to the decoration of the band; 'create the box to think outside of'. It is ambiguous enough to intrigue but fits completely with the content and concept of the leaflet. 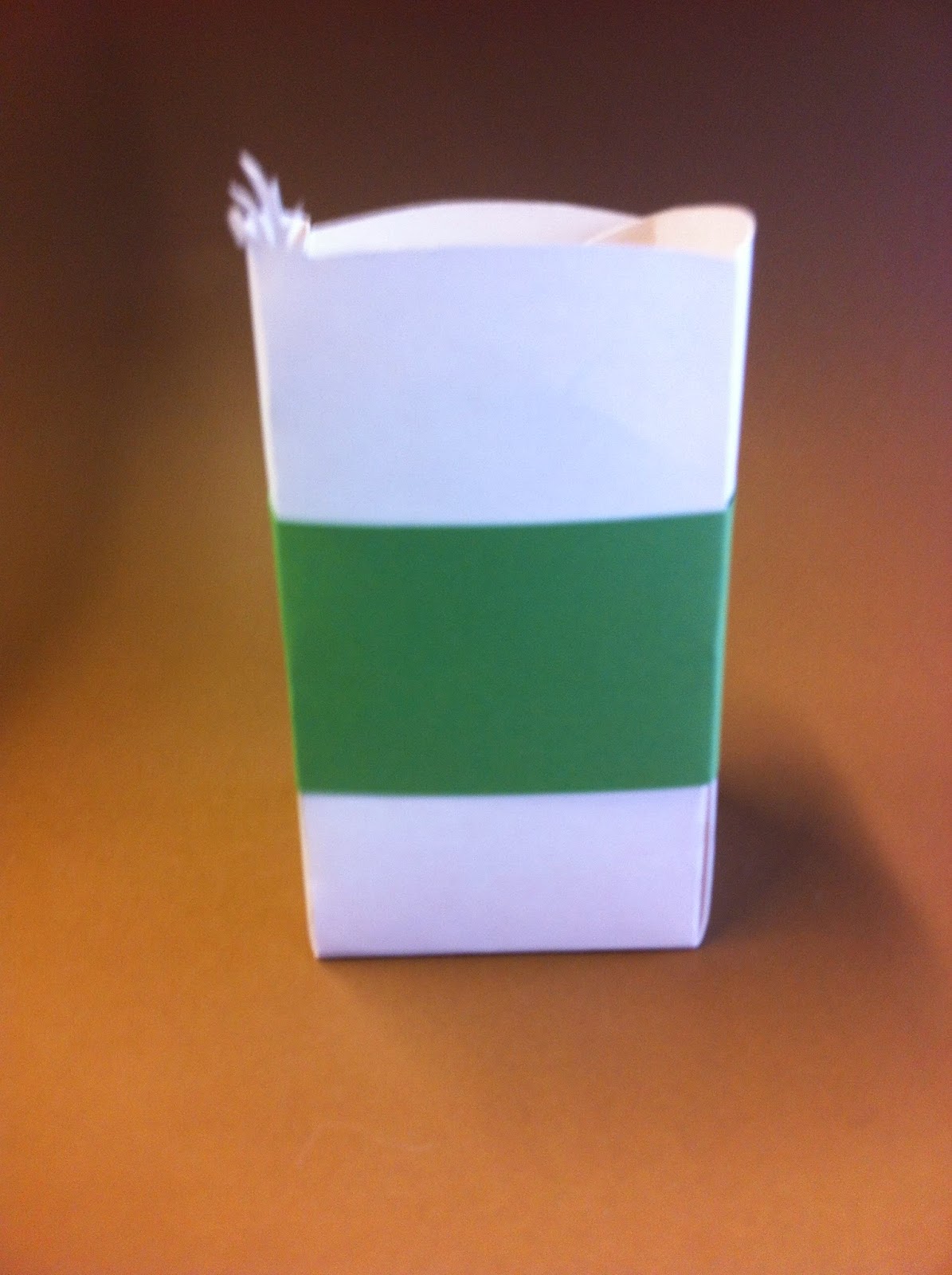 I made it so that only one tuft of grass would be visible  when the leaflet is folded, this is because I wanted the outside to be relatively clean cut. I am unsure if i want to keep this or not. i will need to organise a mini crit and get other peoples opinions. 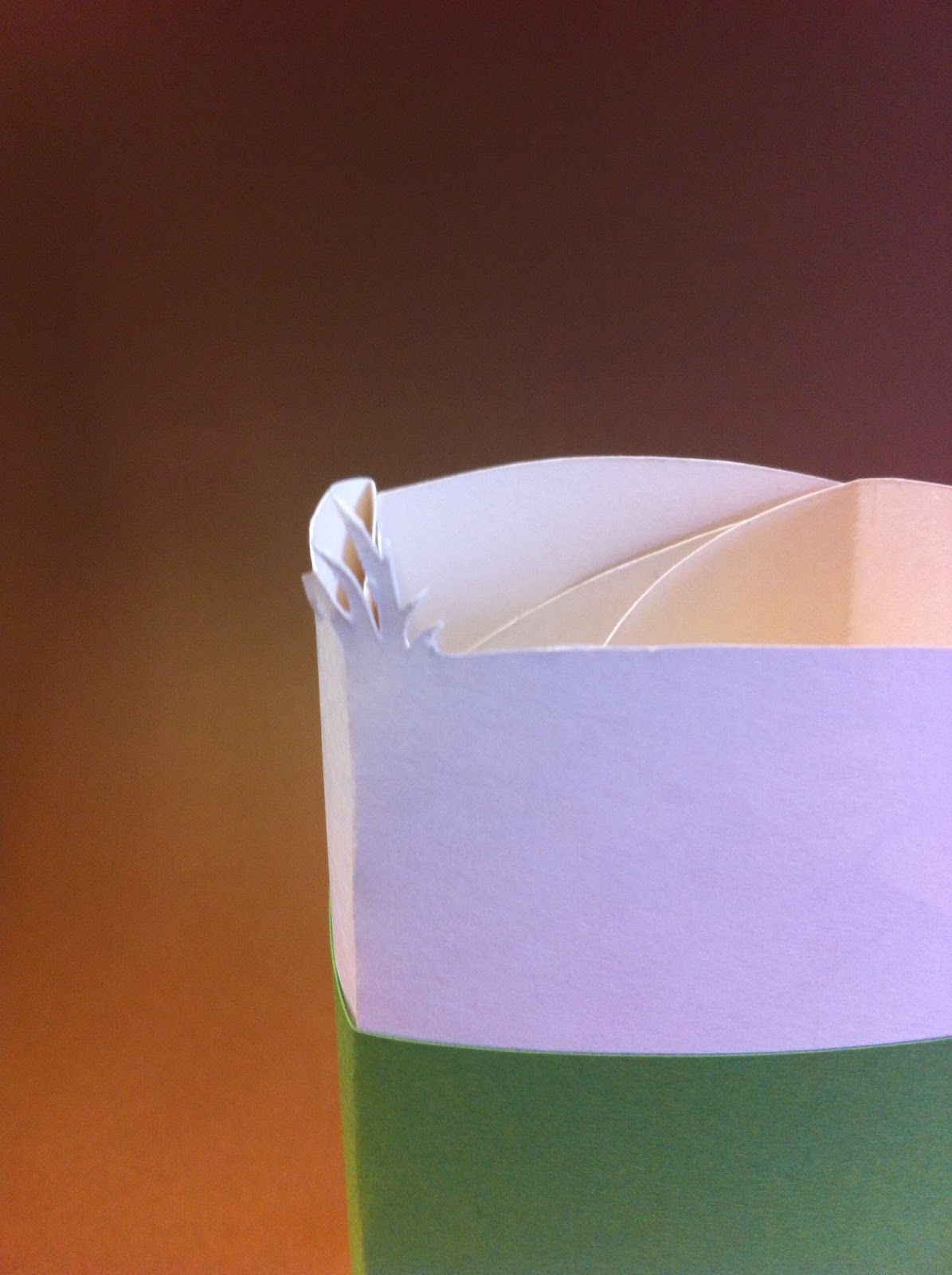 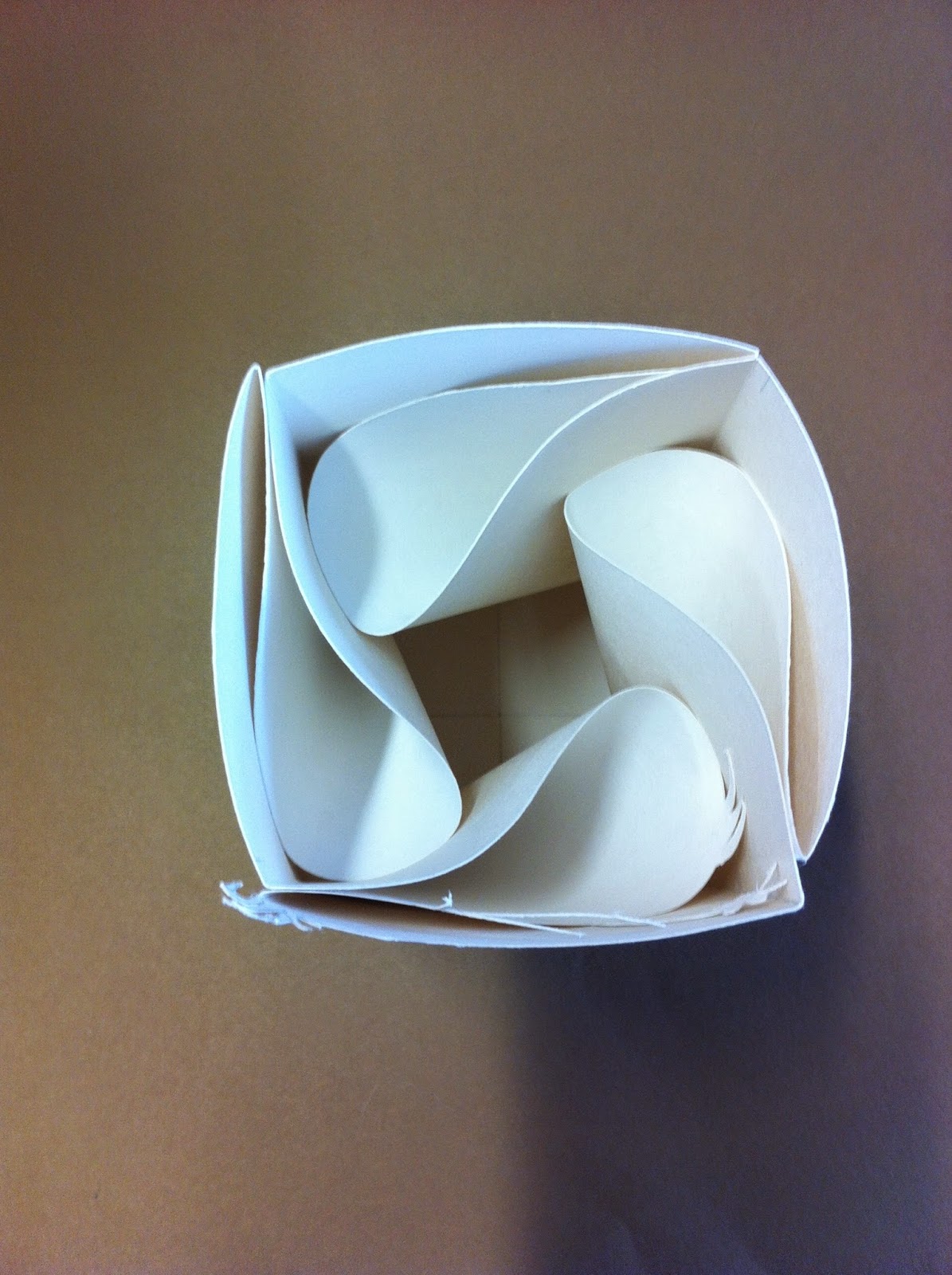