Because the certificates I am creating are to come after the designs created to get people to vote, there needs to be a level of cohesion between the two design outcomes that clearly connect them.
I collected together a number of applications of these designs to analyse so that what I create can develop from and align with them.

Each year the designs remain the same except for the canoes of colour to green and an orange/red. In previous years the circle had been textured so as to appear like the moon. I have no reason why this would be however. This year, the texture has been replaced with a soft dappled finish to suggest grained paper.

The circular frame for the title makes it look fatherlike a badge, which aligned with the idea of awards and recognition. This is increased by the horizontal banner which stretches across the badge.
The clouds are used as primary and secondary. The red/orange is the primary colour used to highlight the most important information, then the green is used to frame and accentuate the focus f the page. This used of colour to create hierarchy could be enough to create a strong sense of connection to the existing print and promotion.

I was also sent the designs for last years certificates. 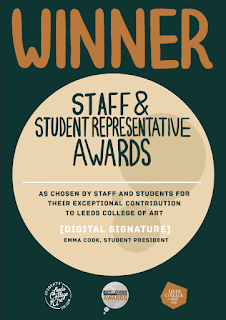 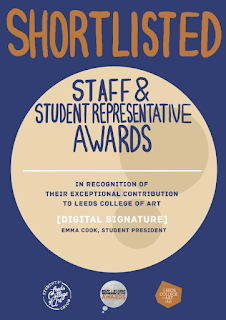 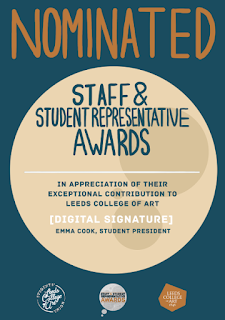 This has given me an idea of the continued use of colours in creating hierarchies and the very distinct links between the design. They are almost exactly the same. However, they are not all printed at the same size. I think they could have been improved if some consent had been made to the different scales they would be produced in. This is something that I wish to execute in my own designs, creating difference in the designs and proportional balance for the format.

7a3 winners
21A4 short listed
A5 on A3  sheet nominated forms