These are all designs I collected on pinterest. They are designs that function best as posters but are very interesting designs. I want to manage a merge of good conceptual content and an inventive format that makes the best of the print outcome limitations. I will look into inventive format later in the project. 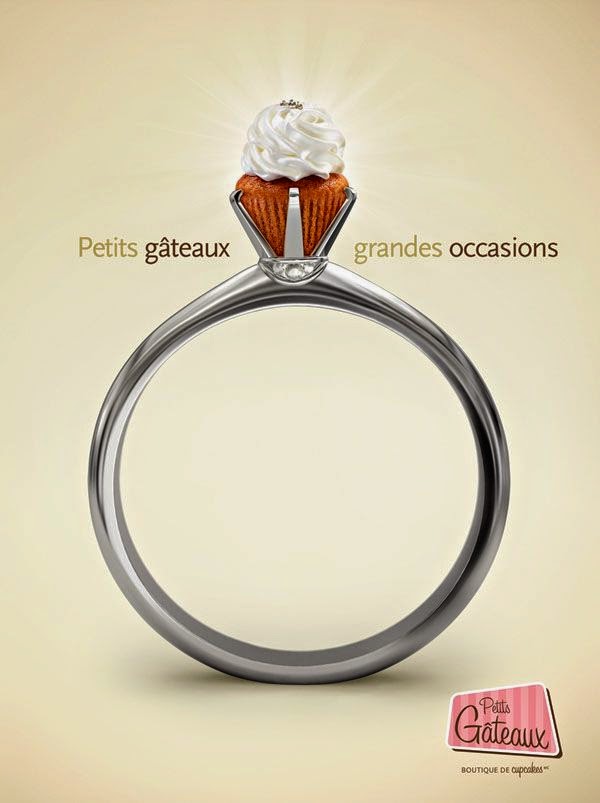 This add for a cake shop takes a simple concept and executes it beautifully. In terms of tone of voice it is a mix of jokey and...well...slightly smug. The actual visual of the cake in the place of a diamond is quite cute and clever but the reason for that visual is the self aggrandising idea of saying that their product is as valuable, rare and desirable as diamonds. As well as this over arching message is the idea that cap cakes are now a trendy way to do the wedding cake as summarised by the ring and the text which clearly translates as 'small cakes, big occasions'. I actually think this detracts from the power of the add. The image has a strong enough message of value and desirability without the text. Also the lack of text would have allowed for development of the campaign; applying the cake to multiple jewellery pieces in mock jewellery adds. However, they are clearly targeting a particular audience with this add; brides. The ring is one of the most highly symbolic parts of marriage, so the connection is easily made. 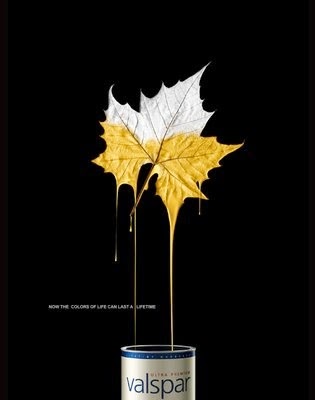 Once again what makes this add so eye catching is the simplicity of the visual and how effectively the main message is conveyed. The black background of the poster makes the colour stand out beautifully as the focus of the piece. The power of the colour creates a definite tone of voice; assertive and proud with a strong sense of confidence. The choice of a leaf as the origin of the paint colour has been carefully considered. By choosing something natural they suggest that the paint its self is natural and wholesome, fitting when you are going to be putting this in your home, it needs to feel safe but confident. Also the idea of the colour being taken from an object rather than mixed from various pigments and chemicals (which is actually the case) suggests the purity of the colour and also the fact that it is reliable. If it is taken directly from the source as it were then the colour will be reliably the same. 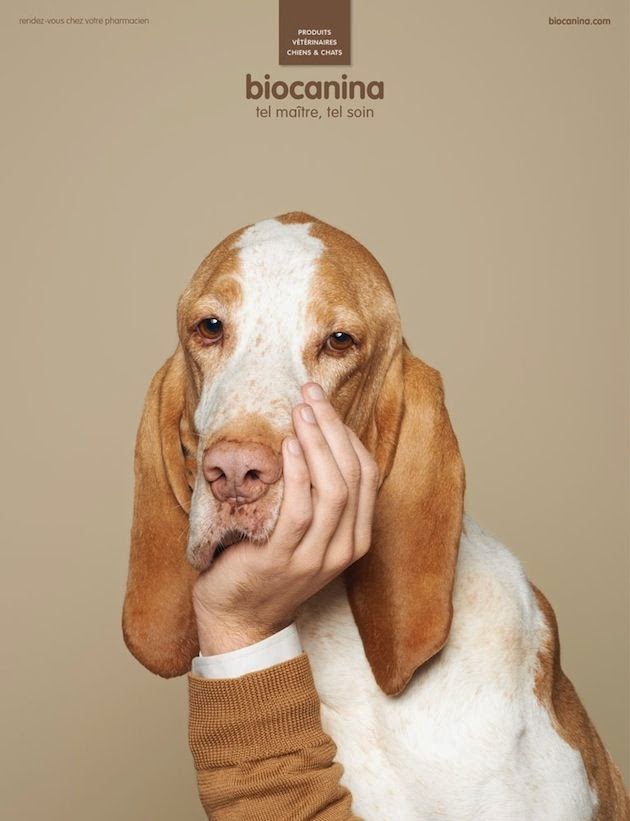 The tag line for this add is 'love him like you love ourself'. The over arching message being to look after you pet by drawing a humorous parallel between the pet and the owner. This is its self is a good concept, however, I think this could have been done a bit better. It is clearly a concept that they wanted to do a series of posters/design for, and it is a good idea for that but all the mastery of the colour doesn't cover the fact that the message of this is a little bit hard to decipher from a glance. Arguably the visual engages the on looker long enough for them to work it out and getting the audience to work is no bad thing but often people simply won't because they are just used to ignoring adds. There is a definite jokey tone of voice because it is simply a comical image and the well executed visual gives it a tinge of wit. I think that the slightly comical tone of voice is always more universally appealing and engaging than a lot of other approaches, and this is perfect for this add which has to appeal to a wide variety of people. 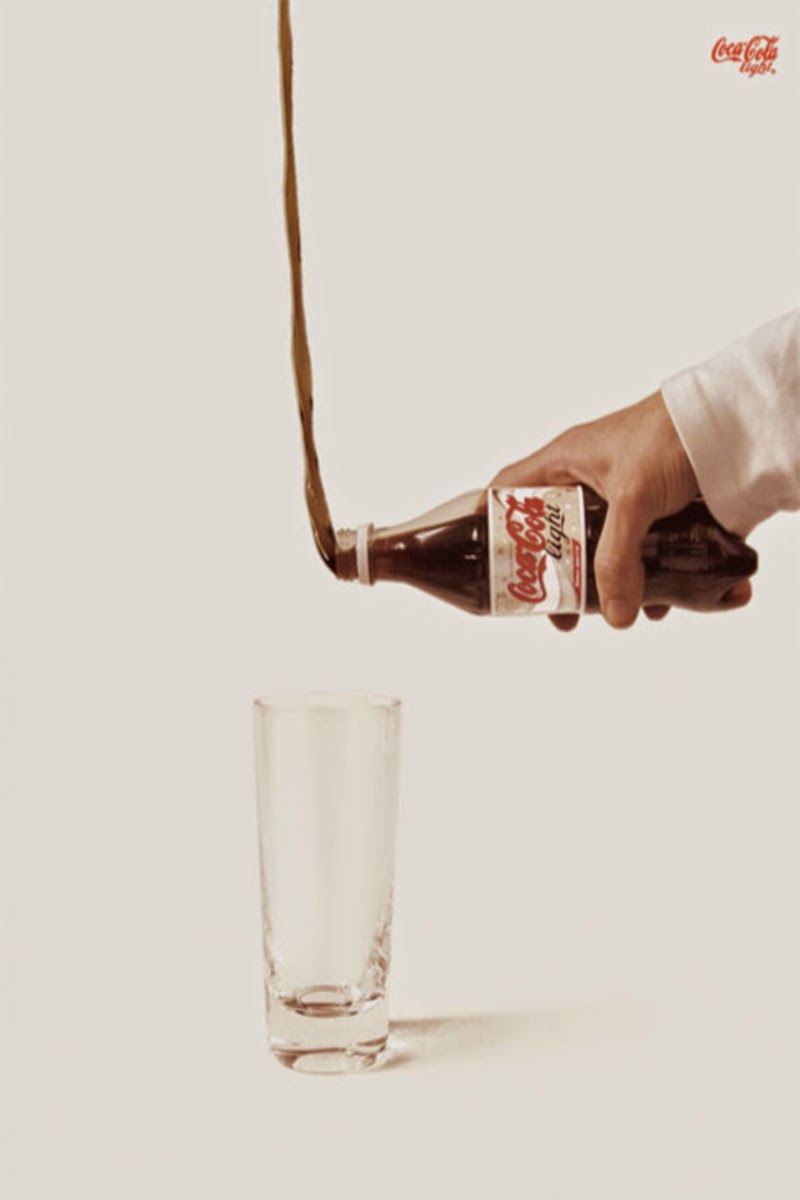 This is quite an old add for coke light. Once again it is the simplicity of the idea that is so eye catching. It is a very accessible joke; simply that the coke...is light. This accessibility makes it appealing to a very wide audience which of course is the audience of Coca-Cola. For me what makes this so good is the fact that it is not just photographed upside down but a clever composite image with the liquid inside of  the bottle is being pulled down to the apparent ground but as soon as it escapes to bottle it floats upwards. The openness of the visual joke makes it very jovial in tone of voice and very cheery, once again, very much in keeping with the established identity of the Coca-Cola brand. 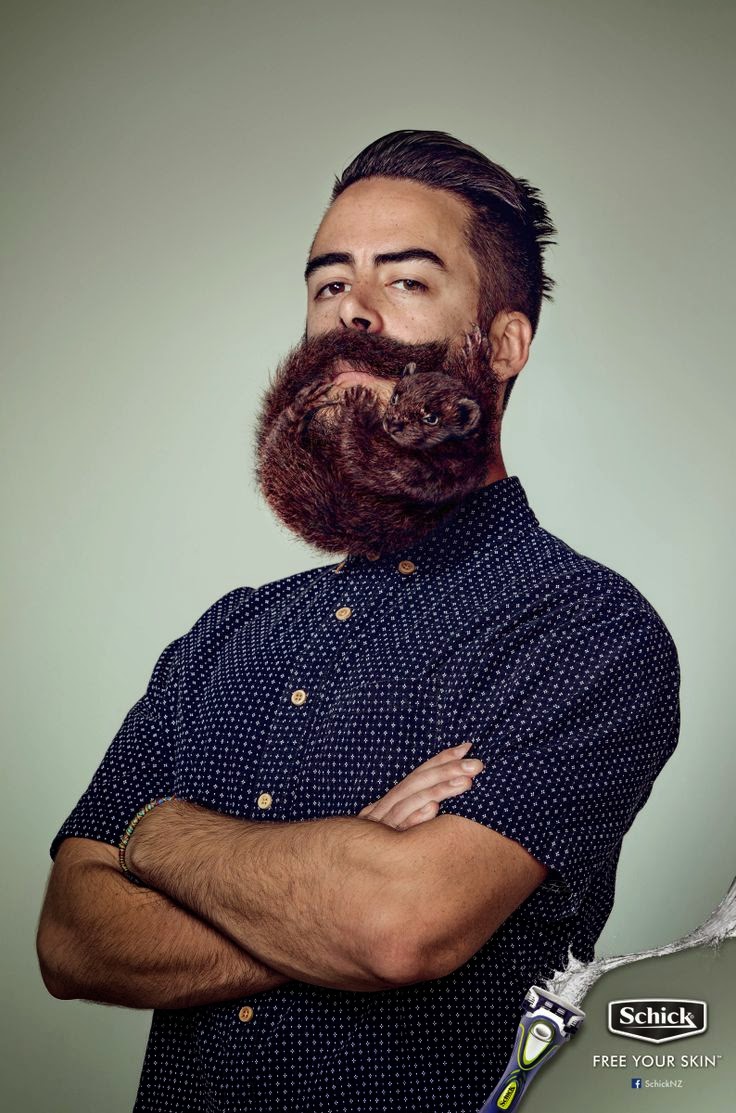 This add for a men's razor creates humour through the juxtaposition of the facial expression of the model and the sculpted animal beard. There is a definite information hierarchy that the poster establishes. When you first look at the poster you see the model, assertively looking out of the poster making eye contact with the audience, self assurance in his stance and a definite 'masculine' stereotype being asserted. The somewhat confrontational nature of this is mediated by the comedic nature of the small otter like creature that makes up his beard. This is so incongruous with the rest of the poster that it startles a laugh out of the audience. The complete tone of voice achieved by this is a mix of assertive and rather cute and belittling of the whole concept of over masculinity. This is a sign post of the audience this poster is intended for. Although it will work for a male audience, because many men (and people generally) don't like to be seen to take themselves too seriously,  it is mostly intended for women who might buy these products as gifts for men they know. This is because this mocking of over masculinity is what makes up a lot of the day to day relationship in actual family units.