I started the process of designing my layout or the colour spread by printing out all the content for this layout. 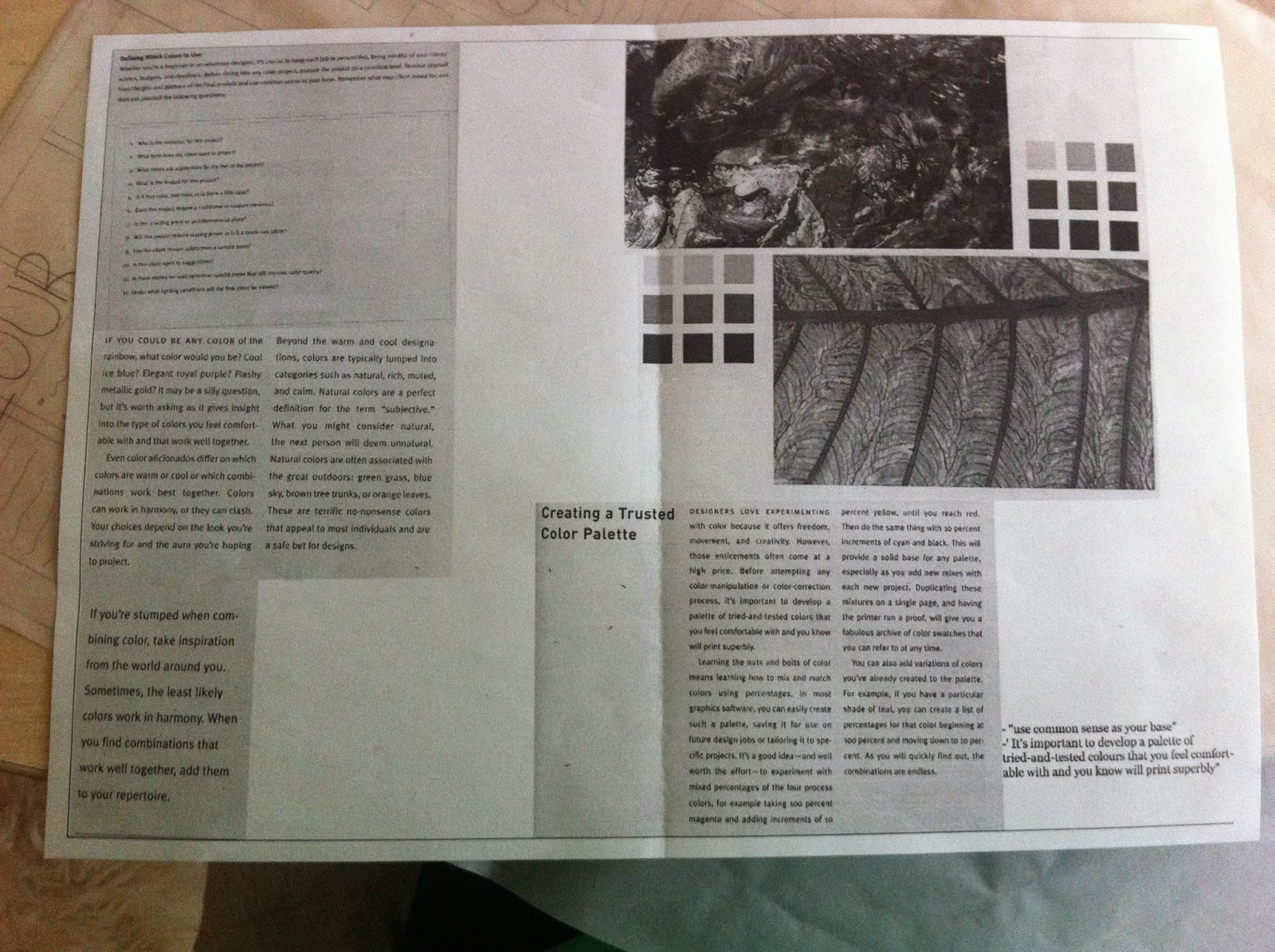 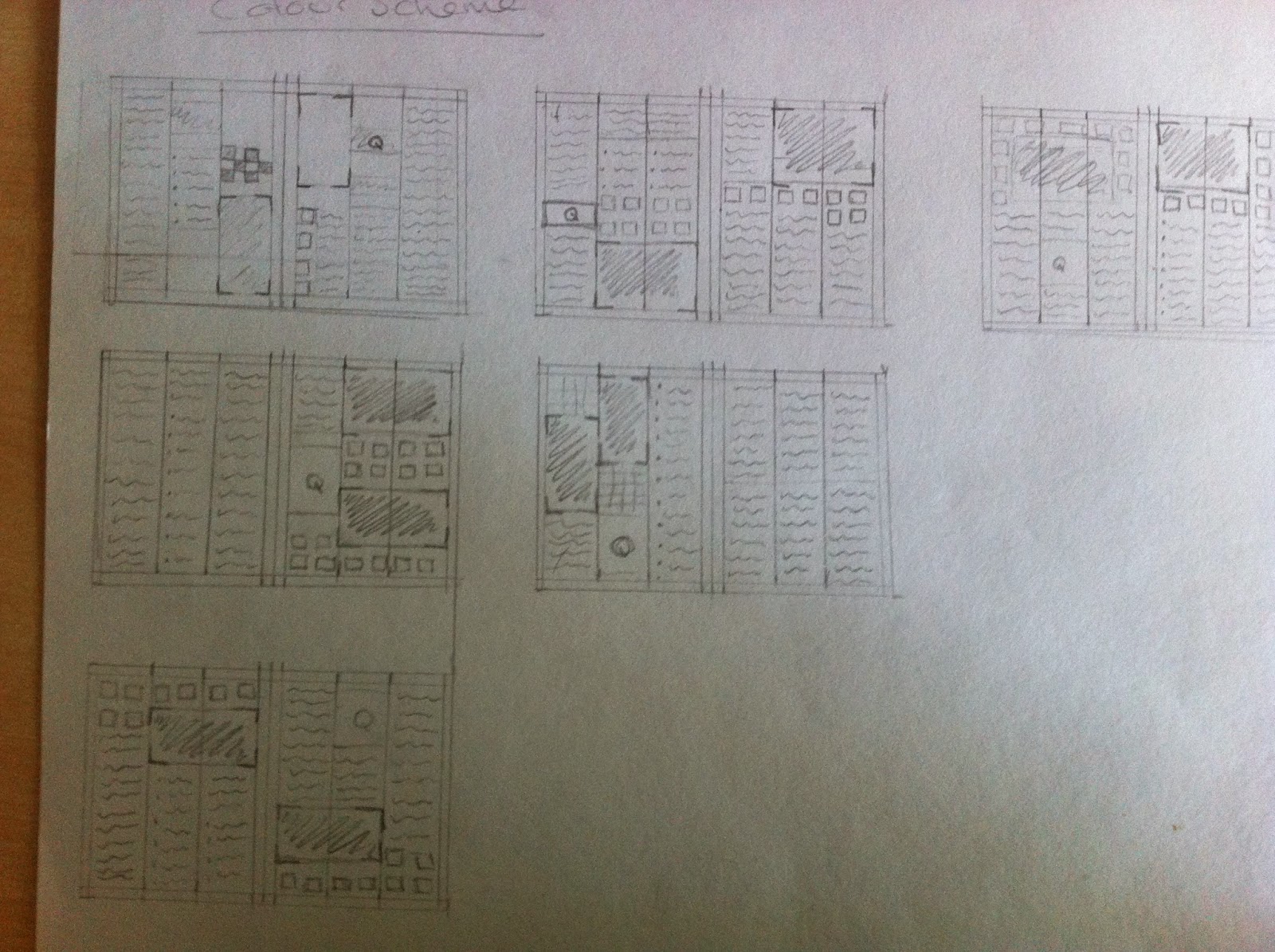 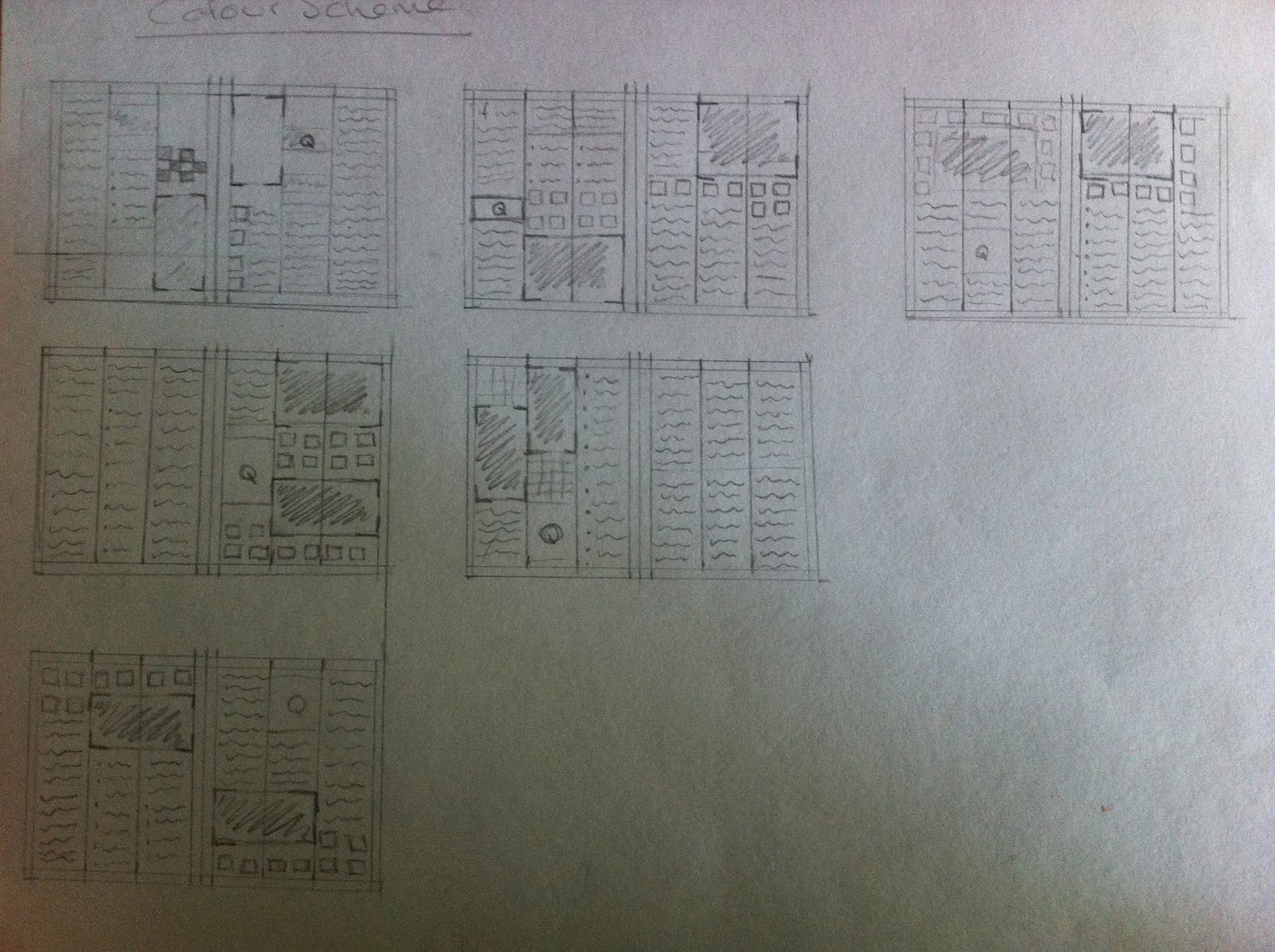 Creating a balance of text and image across the spread was quite difficult but an even divide seemed to be the best way. Avoiding large bodies of text also presented a problem but even distribution was once again the solution. 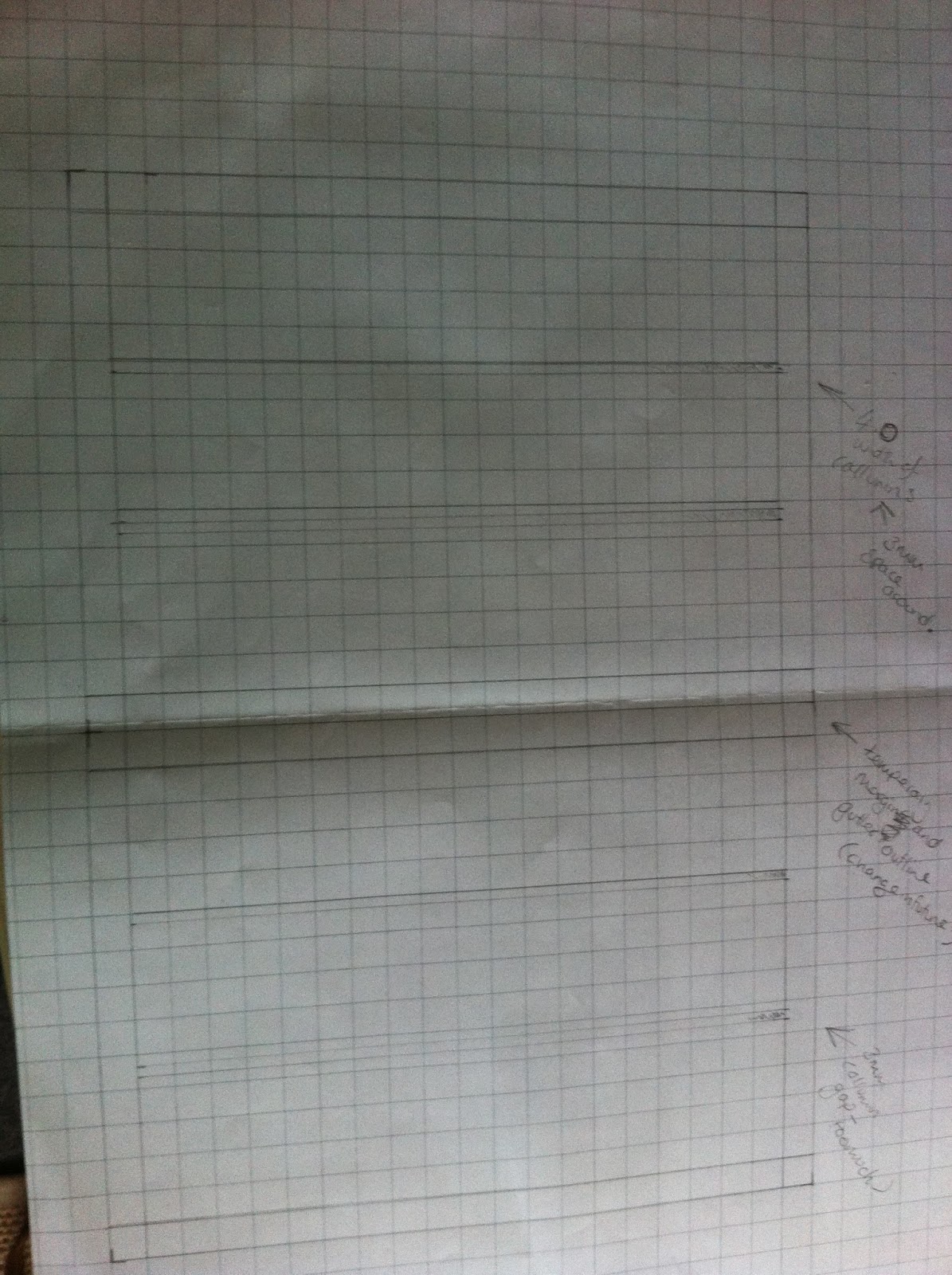 I then used this square paper to upscale the thumbnails to A5 portrait format (this was something I did in the last design principles seminar.) 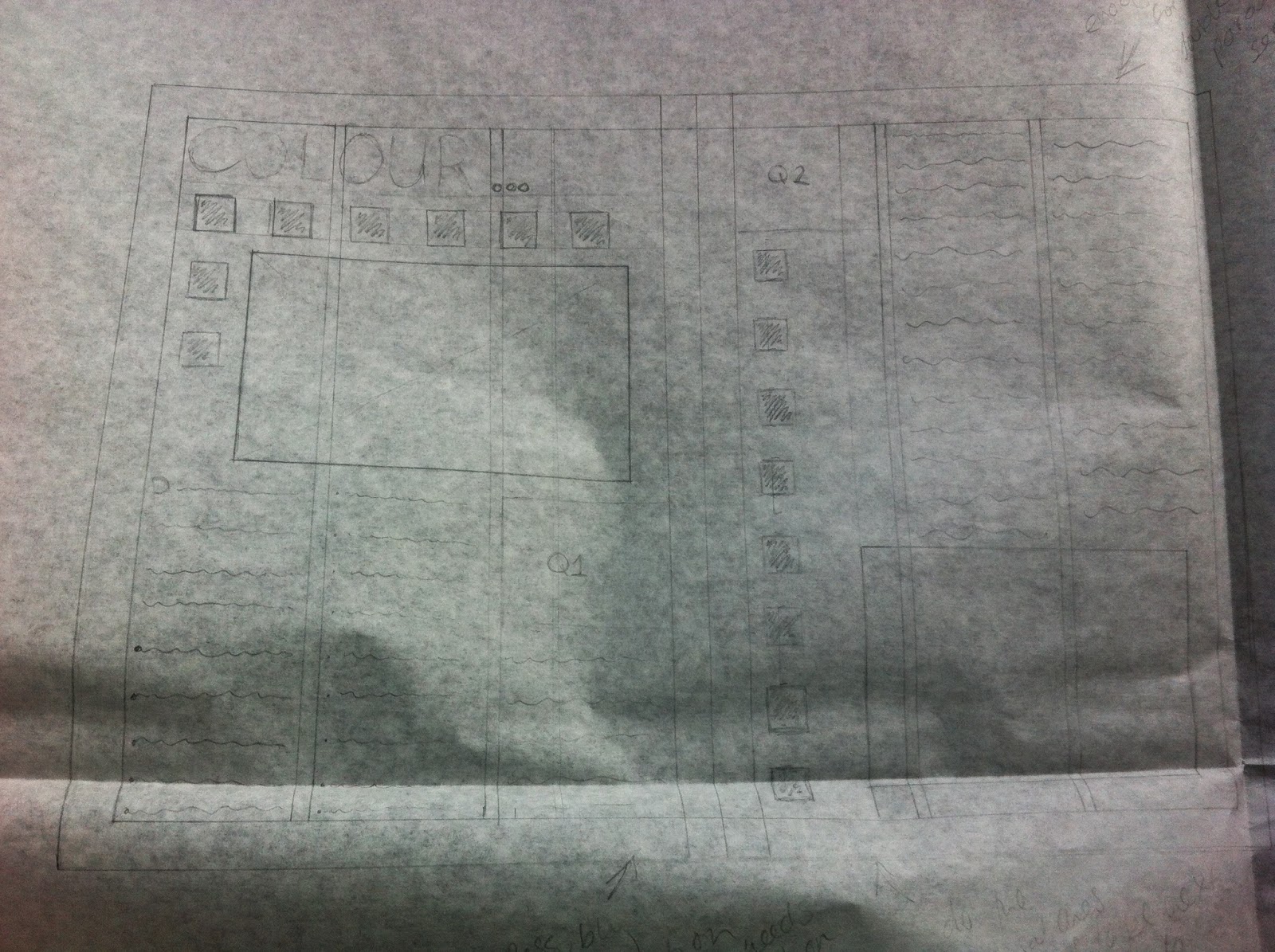 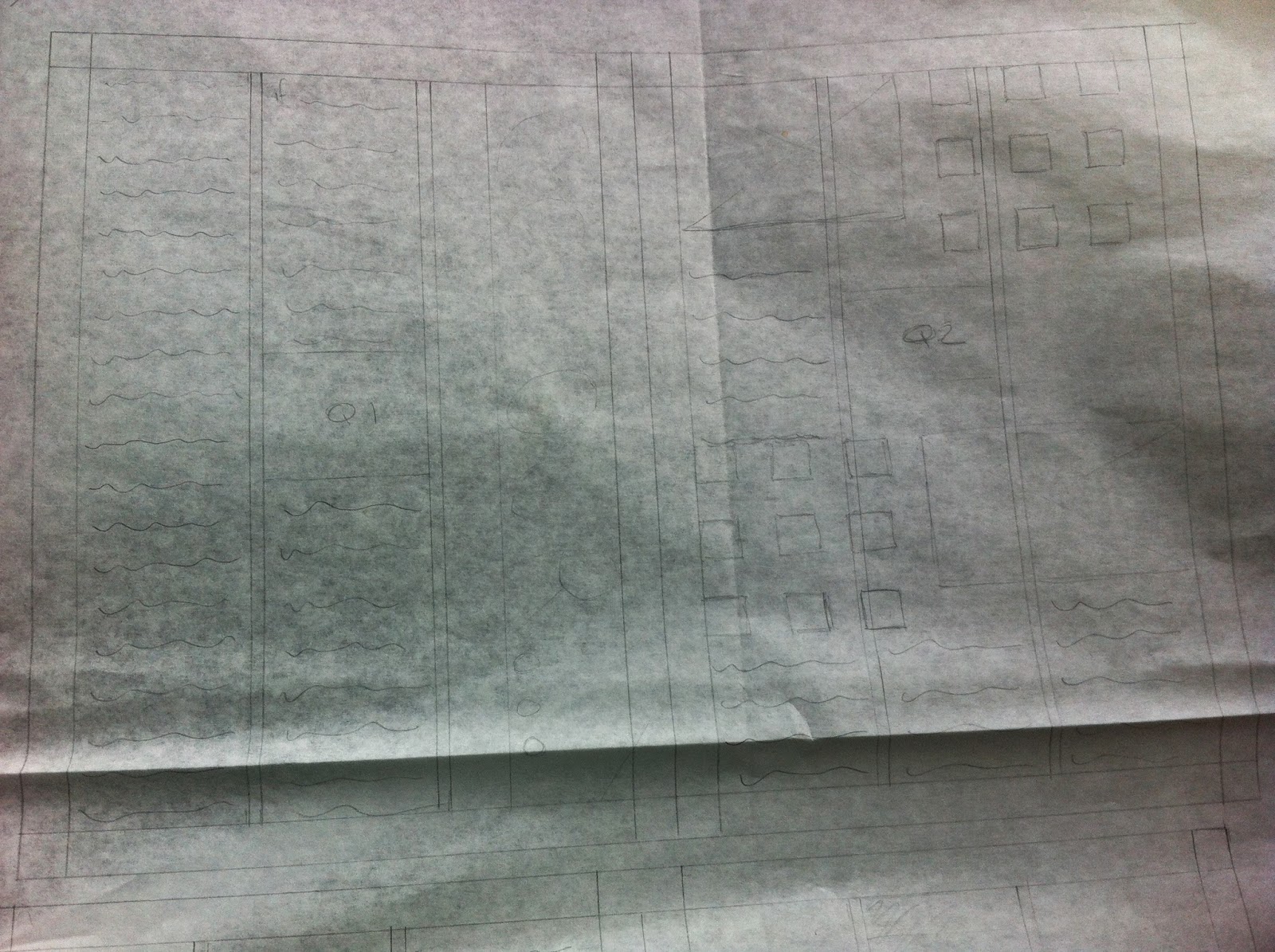 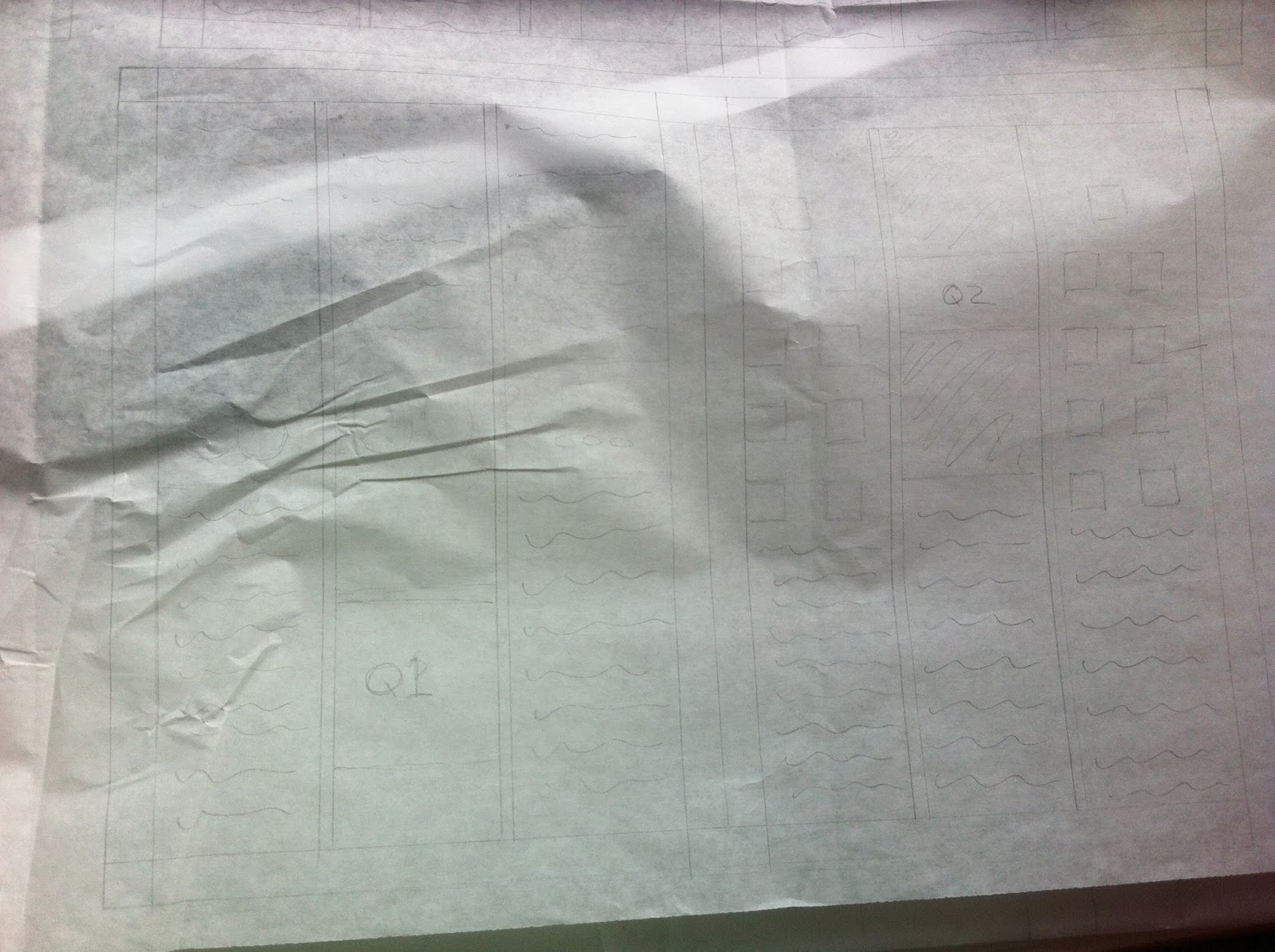 At this larger size the content seemed less controlled and more unorganised with much too large bodies of text. 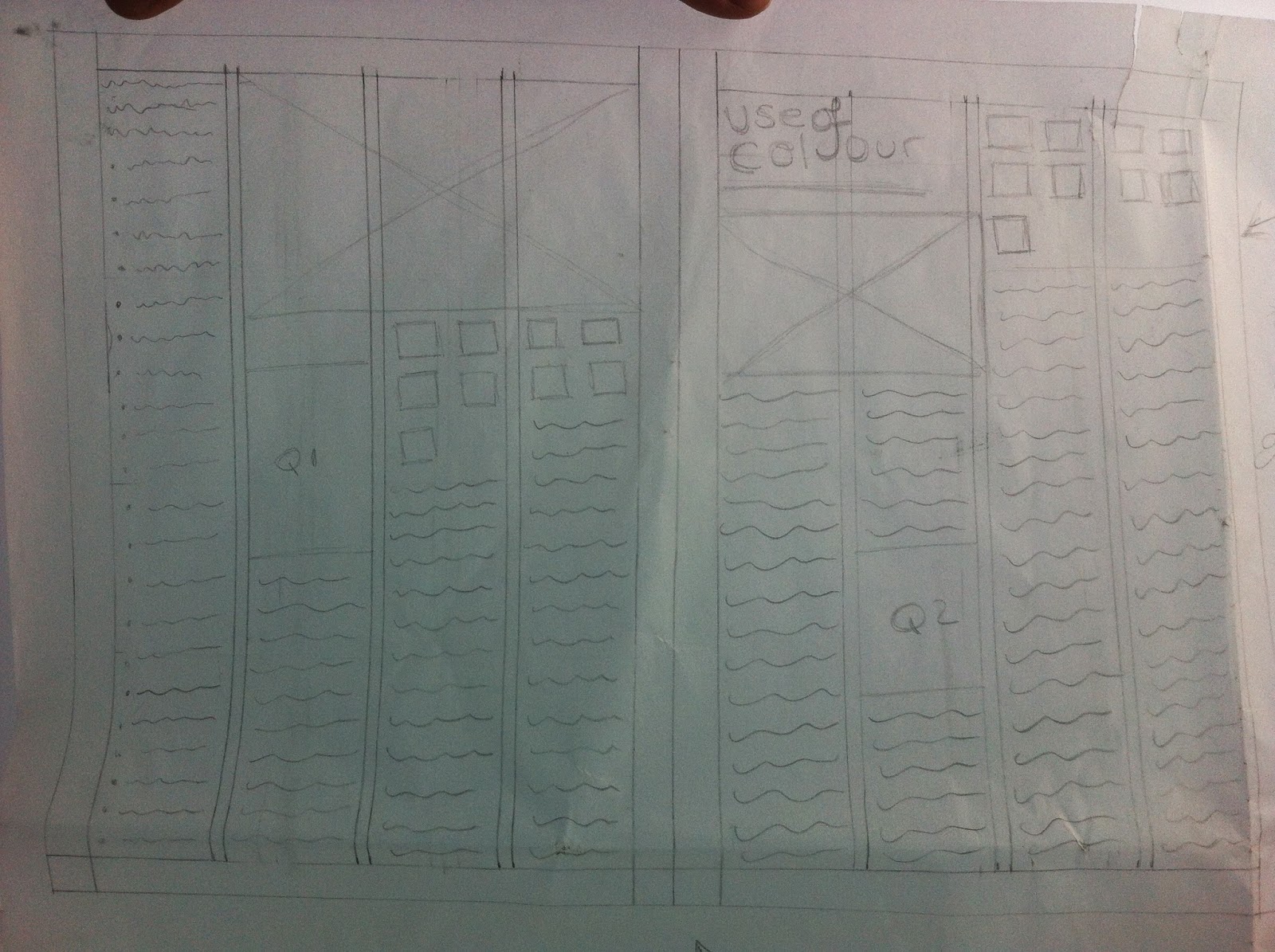 So, I tried a four column grid on each page and did some more full scale thumbnails. 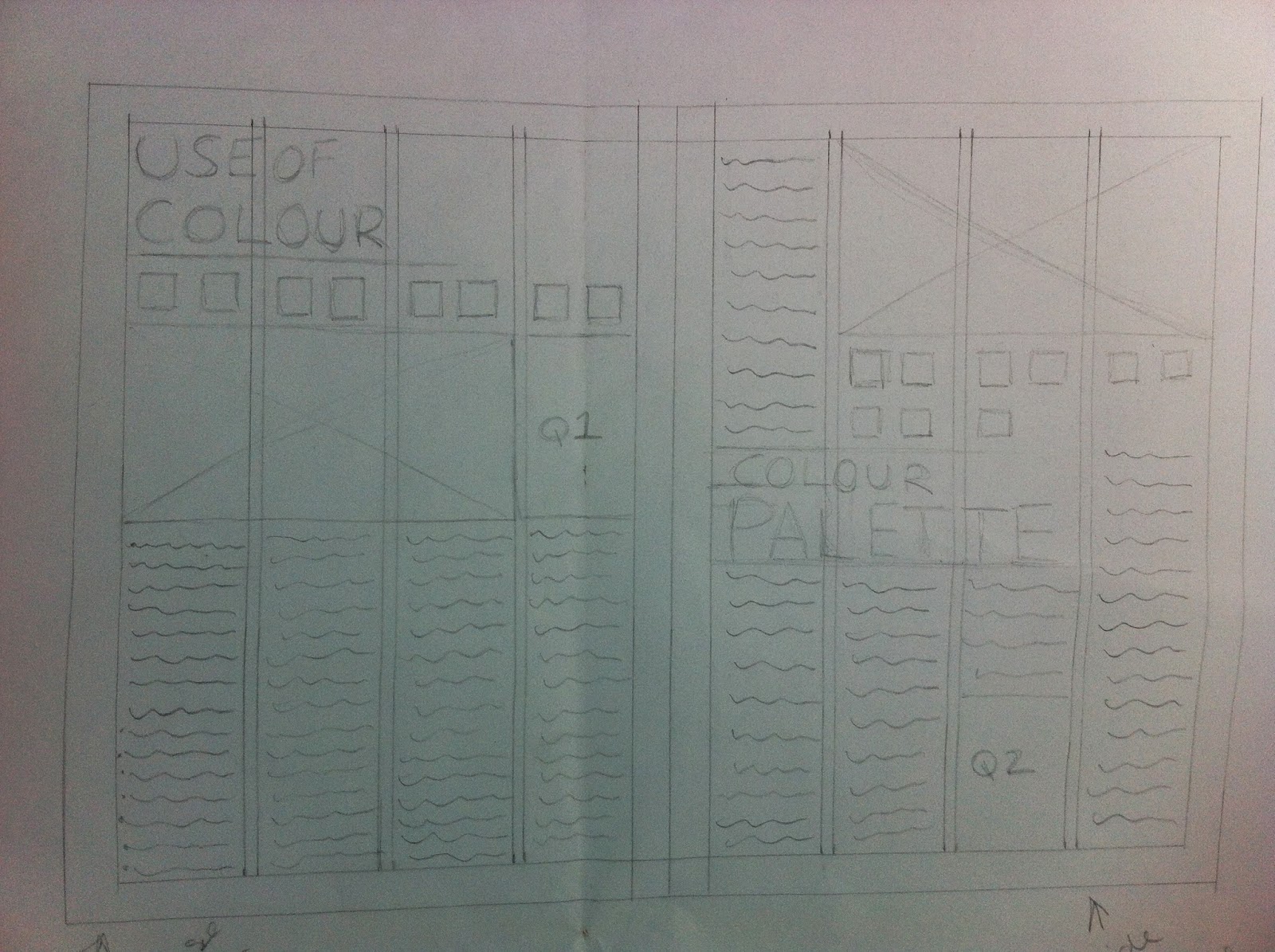 This seems much more satisfactory, the text seems less dominant because of the thinner columns and the content feels more thought about. However, the justification of the text will really effect this. For example, if it is fully justified the text might suddenly look much more dense. this is something that I will need to look into when I create the digital mock ups, it may mean further changes to the layout are required. 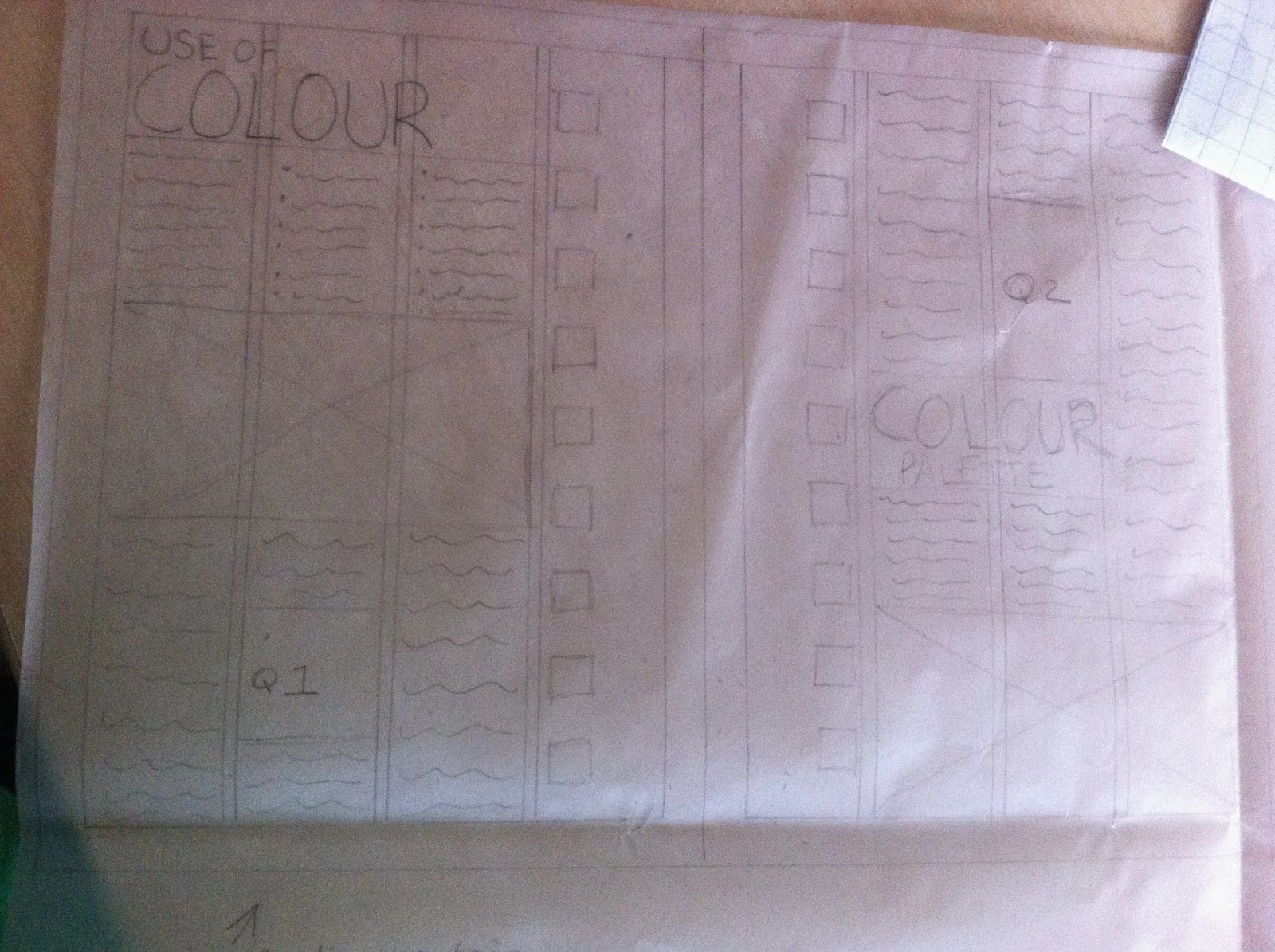 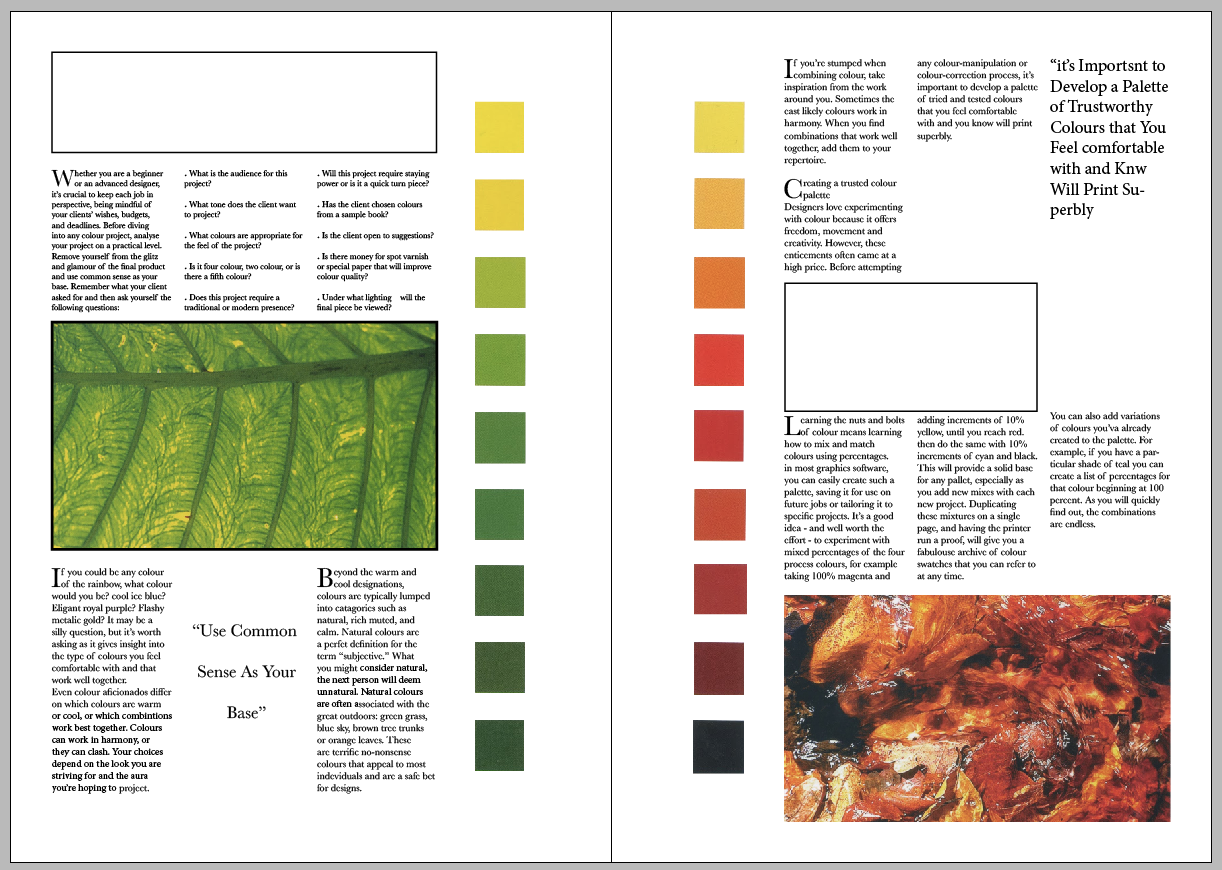 This is a digital mock up of the thumbnail with content. I have not completed the titles but have left the space for them on further revisions. There are lost of things I am unhappy with:
-Spacing between elements is inconsistent.
- Framing of pictures has different stroke width
- The arrangement of the words in quotes needs to be done in illustrator and brought in to get it right
- Justification of type makes it look as if the columns have just been dumped in.
- The bullet point arrangement at the top of the page needs major re-organising
- I am uncertain about the capital letters at the beginning of the columns.
- Possibly sans serif fonts would provide a more spacious feel
- The way the pages are a refection of one another throws the eye off I should try and make them more consistent. 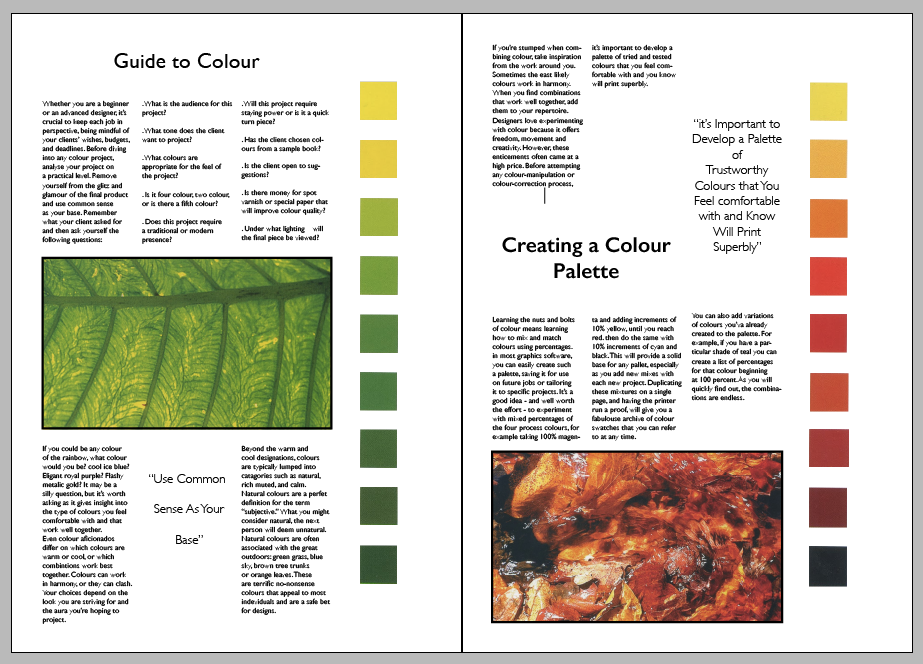 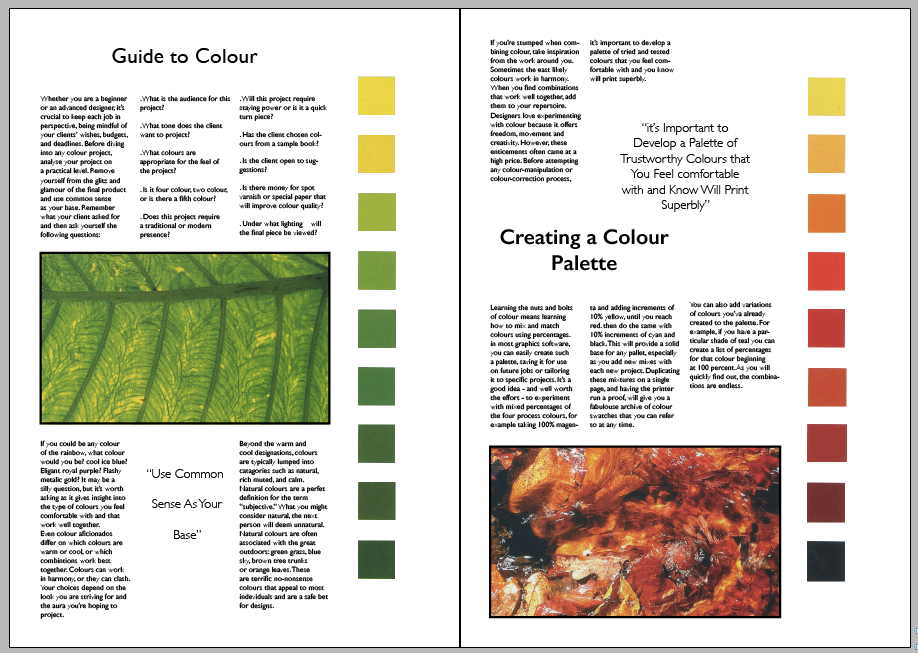 I am so much happier with this layout. I had a bit of trouble with laying out the quote on the right page and it's not quite perfect yet but it's a hell of a lot better than the last try. Just changing to Gill sans opened up the whole page allowing me to use semi bold on the tiles and light on the quotes giving variation yet unity.