I have been thinking about this project pretty much non stop throughout the production time of my other briefs and for the reason what I want to do has simply crystalized as I have thought and talked bout the project. At first I thought about creating a flip book, to show the word feminist rendered in numerous different ways and different textures. Ones that contrasted one another to show haw feminism can grow and change and how it is not simply one set of strict rules that you must abide by if you are to be a feminist.

I also dabbled with the idea of making a few of these that could symbolise the feminist stereotypes. However, I felt like this was enforcing these stereotypes rather than challenging them.

Eventually I settles on a developed version of this idea. A campaign called liberation not a label. It centers around the typographic representation of the word feminist and uses contextual texture of the city (the places the posters will be) and contrasts with them to challenge the normal view and stigma of the word feminist 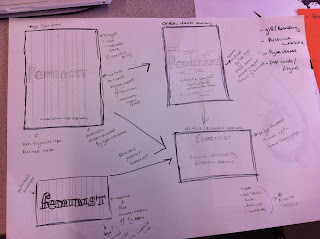 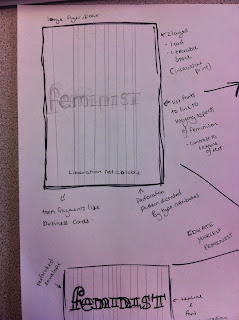 Fly posters which have a varied (possibly 4) typographic and textural representation of the word feminist. Each dependent on the texture they are sat against. The poster will be made of two layers the first a card layer onto which the texture is printed and the second a thin stock more like traditional fly poster stock. This would have the type cut into it over the texture behind and also have a pattern of perforations leading from the word feminist, which could be torn away in stages to reveal the pattern below. 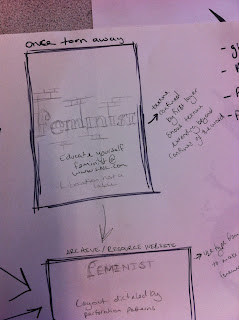 On each piece of paper torn away by each person there will be a url to an archive website which allows you to educate yourself feminist. Filled with TED talks, books and articles to make people think and engage with feminism on their own terms making it much more successful. 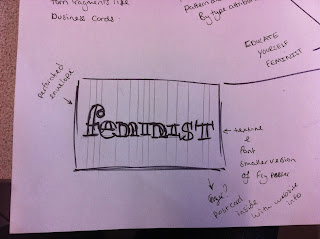 As well as the posters I was considering making small flyer post cards that would be based on the designs of the posters with a perforated envelope that matches the perforated pattern on the poster (dictated by typography) and contains a card with a url to the website. 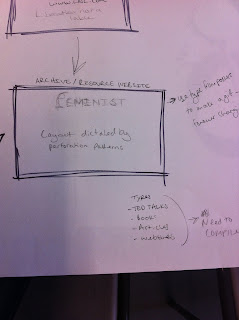 I will also need to design the website layout and how people will access the different types of content the website contains. I have held off doing a thumbnail for the website because I am thinking of using the perforated shapes to create a layout that related closely to the print outcomes for the campaign.