Once I had decided on the main fonts for the four different posters I realised I needed a subtitle font for the rest of the text that could work cohesively with all of the other fonts and not dominate, whilst still being completely legible.

I started with avenir with increased tracking so that the visual texture of the word feminist is still the first in the hierarchy. However, the weight just felt so different that the two fonts felt far too separate, and they need at least the semblance of cohesive visuals to not jar the eye. 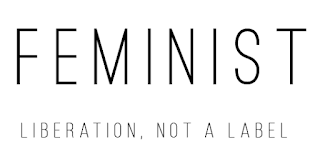 I also tried bebas nue again with increased tracking, but the odd X hight of all the capitals felt too similar to the sans ostrich and as if it some how favored this representation of feminism which doesn't work. I need something that sits between all the different representations.

I tried a serif font-georgia, one of my favorites  and it felt like it sat between al the other fonts in a more complimentary fashion. However, it did feel a bit dense, as if it was a little too dominant on the page, feminist needs to be the first word read.

So, I reduced the size and increased the tracking and came up with something that I think really works. It unifies the very different fonts in exactly the way I needed. 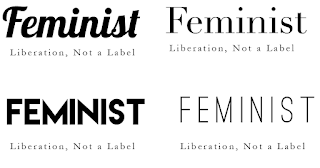 All that remains is to work on the perforation patterns that are inspired by the shapes in the fonts I have decided on. This is intended to communicate the freeing of the word feminist of its shaping and controlling stigma.