From reading the book I found it clear that although the book is clearly about feminism in the modern world. However, it is also about feminism on a personal level, Caitlyn's personal feminism, and how it cam to be. It says it on the back of the book, it is part memoir. This means that Caitlyn, her humour and her written tone of voice are what differentiates this book from other of the genre and might be a good source for ideas. 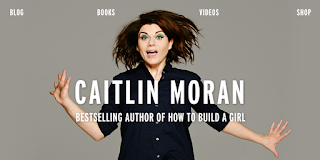 The written tone of voice that anything by Caitlyn Moran has, is one of realistic humour and basically a  to the point delivery that lends her a feeling of veracity and likableness.

This extract from a review of the book in question draws attention to the approachable choice of content in the book. This is a defining point of identity for Caitlyn Moran; she is humorous in a light and accessible way, because she jokes about things we all understand.

The last line of this extract from the same independent review as previous, captures the straight to the point essence of Caitlyn Moran. The way that she takes no prisoners when something is ridiculous and unfair and really is just talking a load of common sense, which is the impression you get from her.

I also thought it worth while to look at the way she is visually presented online in image form and there is a definite sense of the curated imagery, shaping a public identity. I collected a couple of these images to demonstrate this. She nearly ever has a straight face. Its always about who is animating the face rather than the face its self. Her personality is always the focus, not looking good. She playfully pulls faces and mostly addresses the audience with direct eye contact.

She also has a tradition of liquid eyeliner, which draws attention to her eyes and the way she is visually addressing the audience, as if sharing a joke with them. There is almost always her typical green eye shadow above the eye liner, both brash and playful simultaneously. 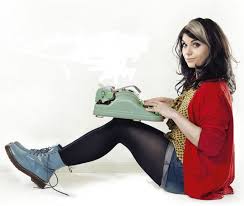 A matter that takes up almost a complete chapter in the book is that of women's shoes. She has given up on them. That is why in almost all promotional images that show her feet she is wearing her Dr Martin's. This creates a sense of the no nonsense and assertiveness which could be played on for the visuals.