Once I knew I wanted Jelly fish to be the focus of the wallpaper and I had made a Pinterest board of photos and paintings/drawings that were a source of inspiration when it came to doing my own illustrations. 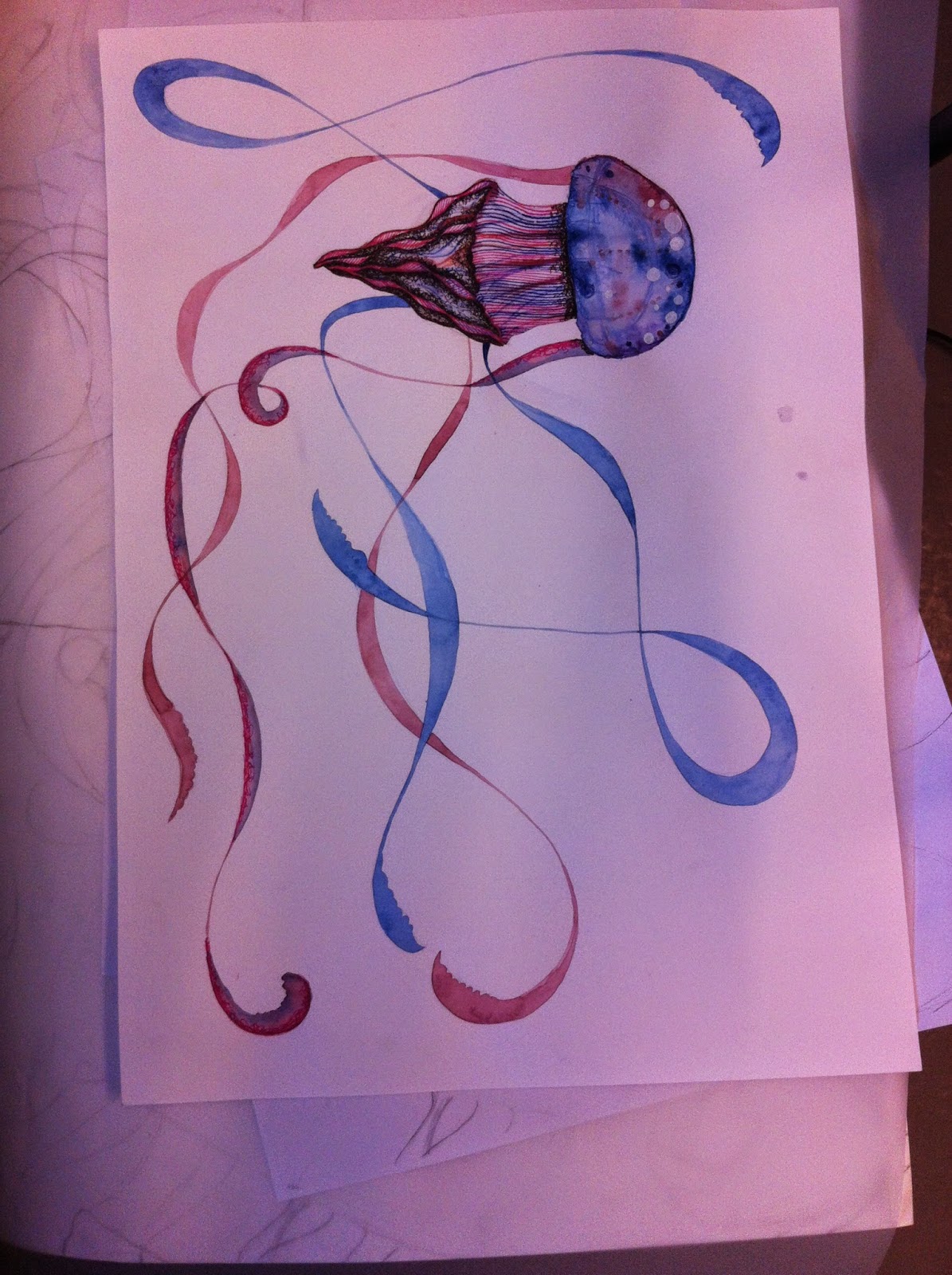 From this Pinterest board I drew aspects of many jelly fish to create a fictional jellyfish. I also took cues from the colours schemes used in the different art work I had found. There was a dominance of pinks and blues with touches of greens. I had no idea when I started how I was going to execute this illustration apart from the fact the water colours would have about the right consistency to suggests the translucent structure of the jellyfish. 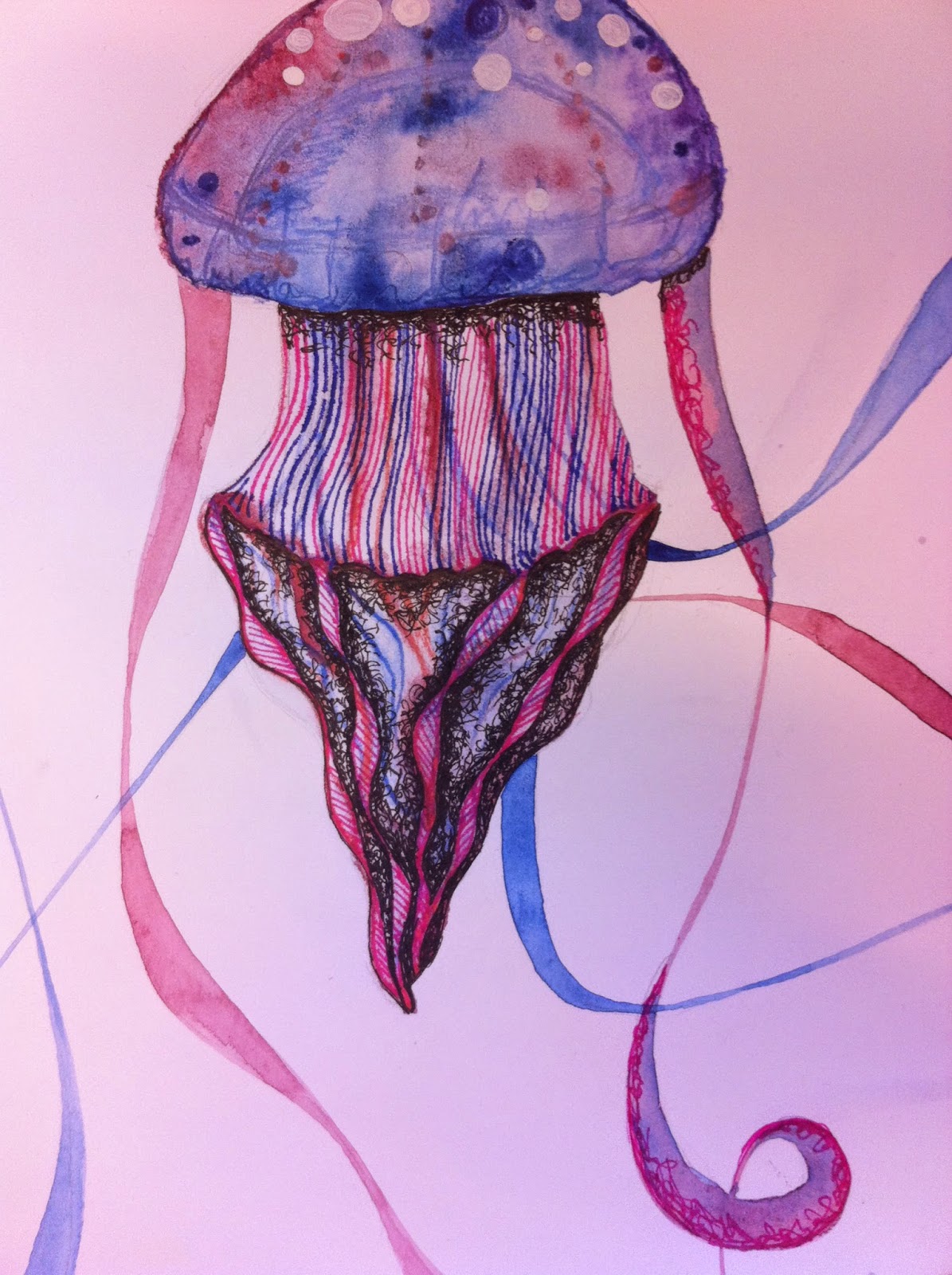 I ended up layering numerous different mediums on top of one another to finally achieve an effect I was happy with. I used the water colour base by damping the paper first and then dropping the paint onto the surface and allowing it to spread. This created a really nice soft dissemination of colour across the jellyfish. This was great but the illustration had no depth. So, while it was still wet I used a mix of different water colour pencils to suggest the inner structure of the jellyfish. The light blue water colour pencil I used for the inner dome works particularly well. I also used a deep magenta and a dark blue to make the soft dots of colour you can see over the expanse of the outer dome. I also made use of white ink to add some more of these dots in a more definite manor, creating highlights and the suggestions of reflection. 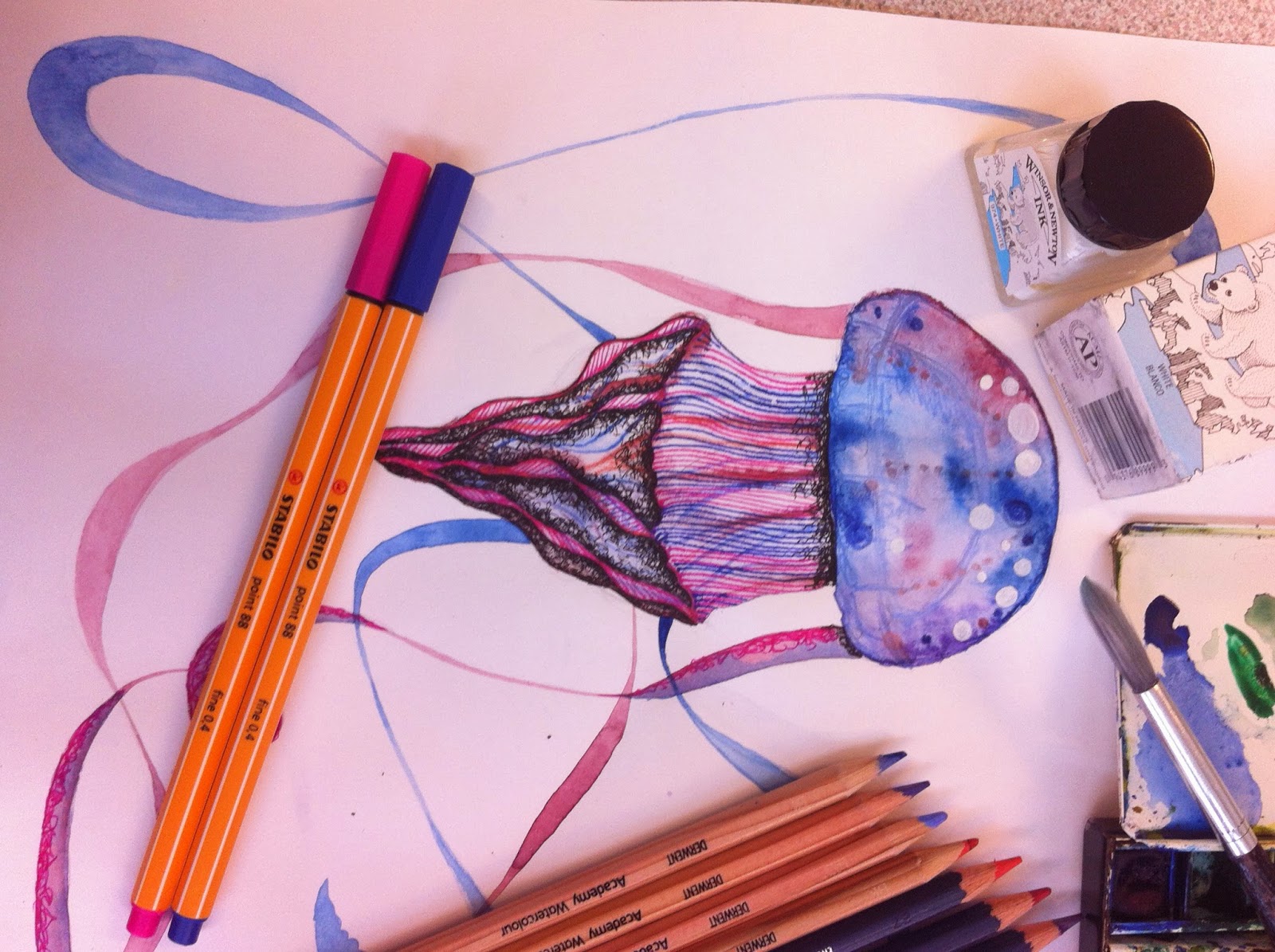 Although I am happy with this illustration it is not quite what I want to achieve. It seems too light and pink and a bit girly. This is something I want to ask in the up and coming crit. 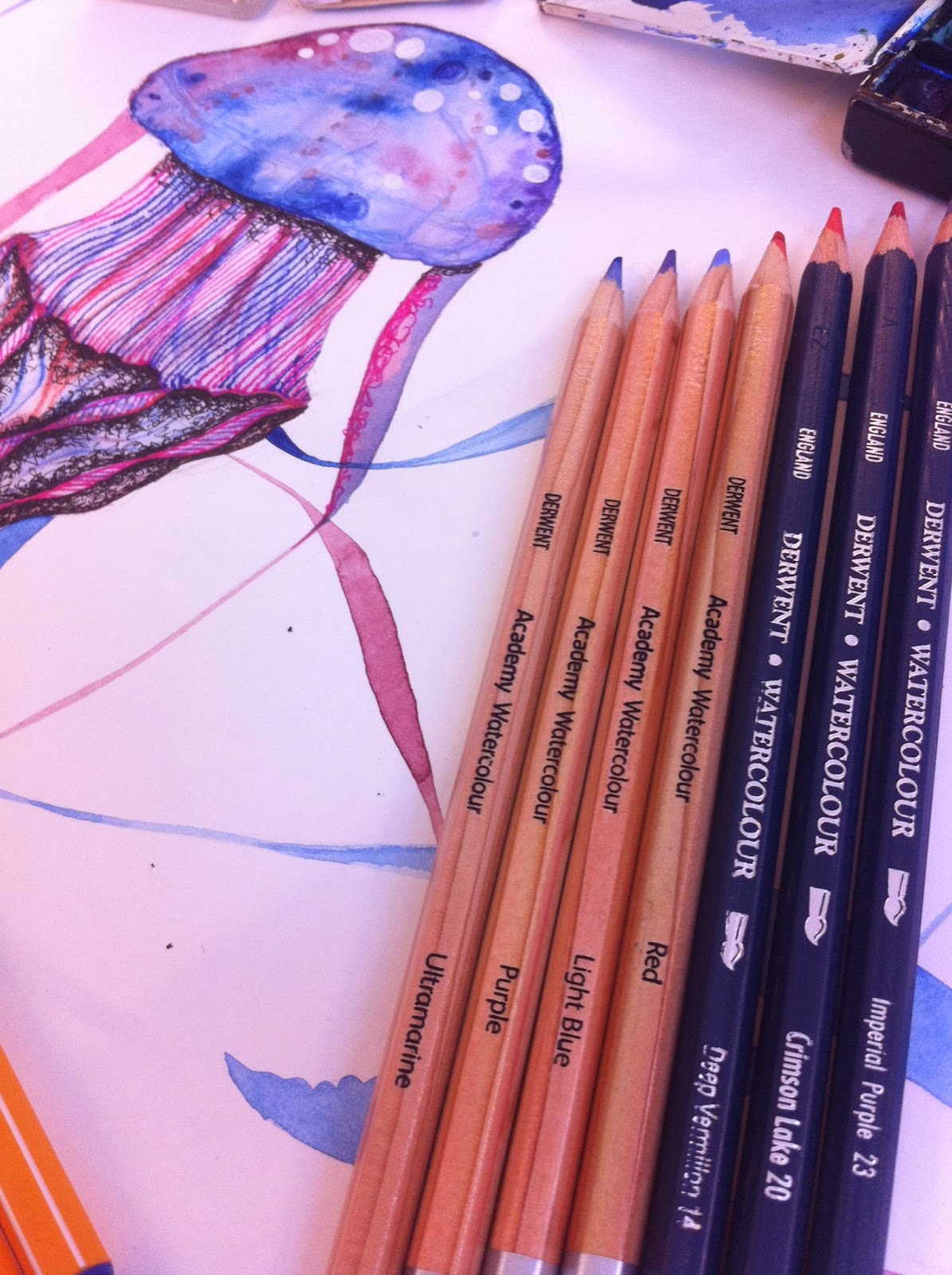 I also started to think about the repeat. because the whole idea of my design is to mimic the clever interlocking invisible repeat of the Arts and Crafts wallpaper designs, this is a big part of the designs. 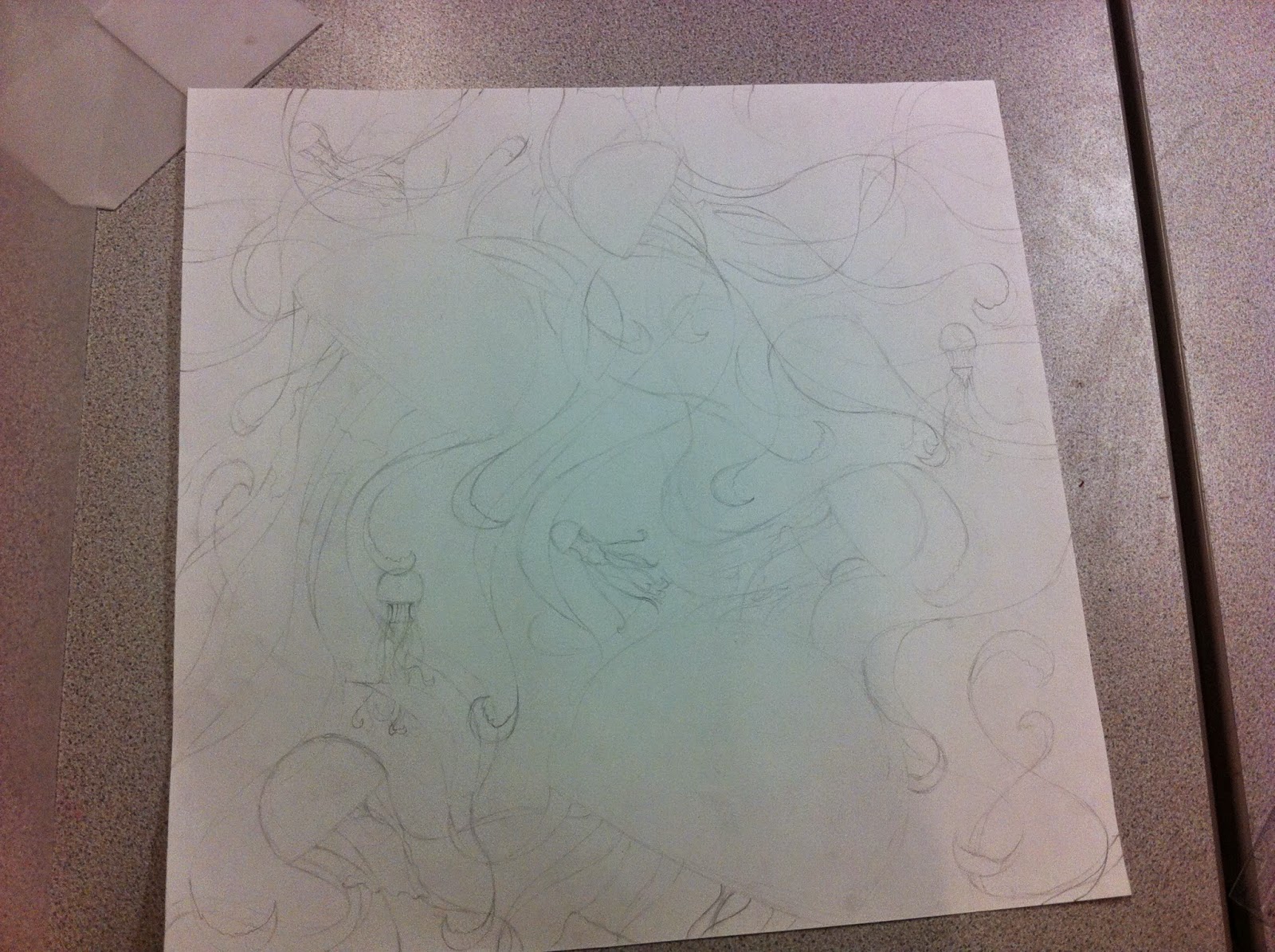 I checked the specs of the competition and found that there was a maximum width of repeat of about 53cm. So, I cut out a square of 53cm by 53cm. I wanted it to be a square so that the actual tiling repeat could be very simple and the pattern its self could do all the work. his is so that when I upload it to the website I can select and easy straight repeat. 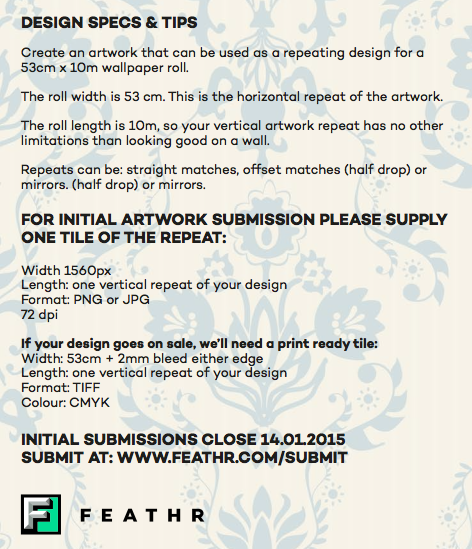 Although I measured out where each tentacle crossed the edge of the repeat and made sure it came back onto the repeat on the other side, I am still unsure if it is perfect. Even the slightest difference between the two sides would mean the whole repeat will be visible and the whole point of the design is void. So, I tried photocopying the design edges and matching them up but this was too inaccurate to be sure that the alterations that i was making were any good. 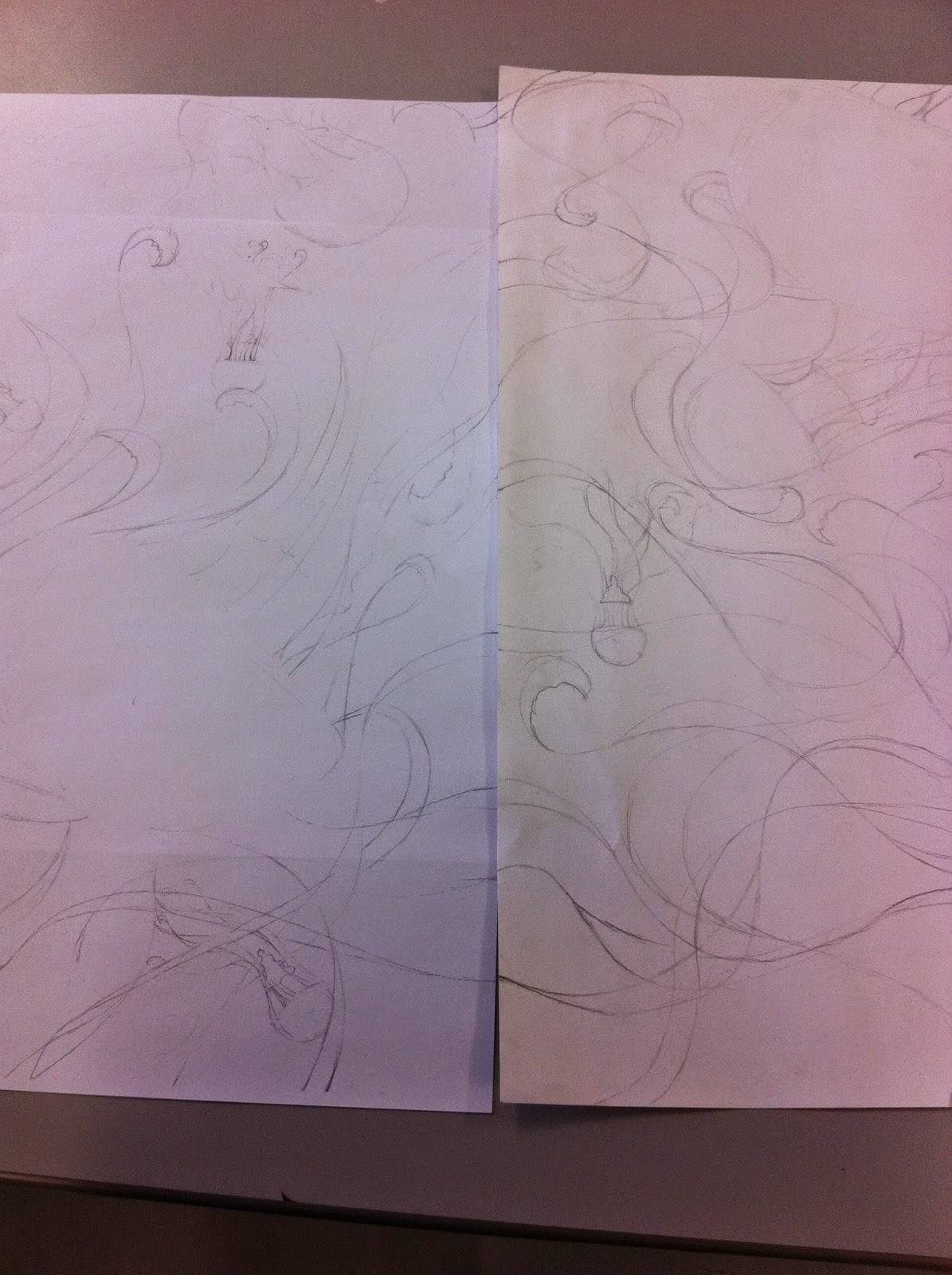 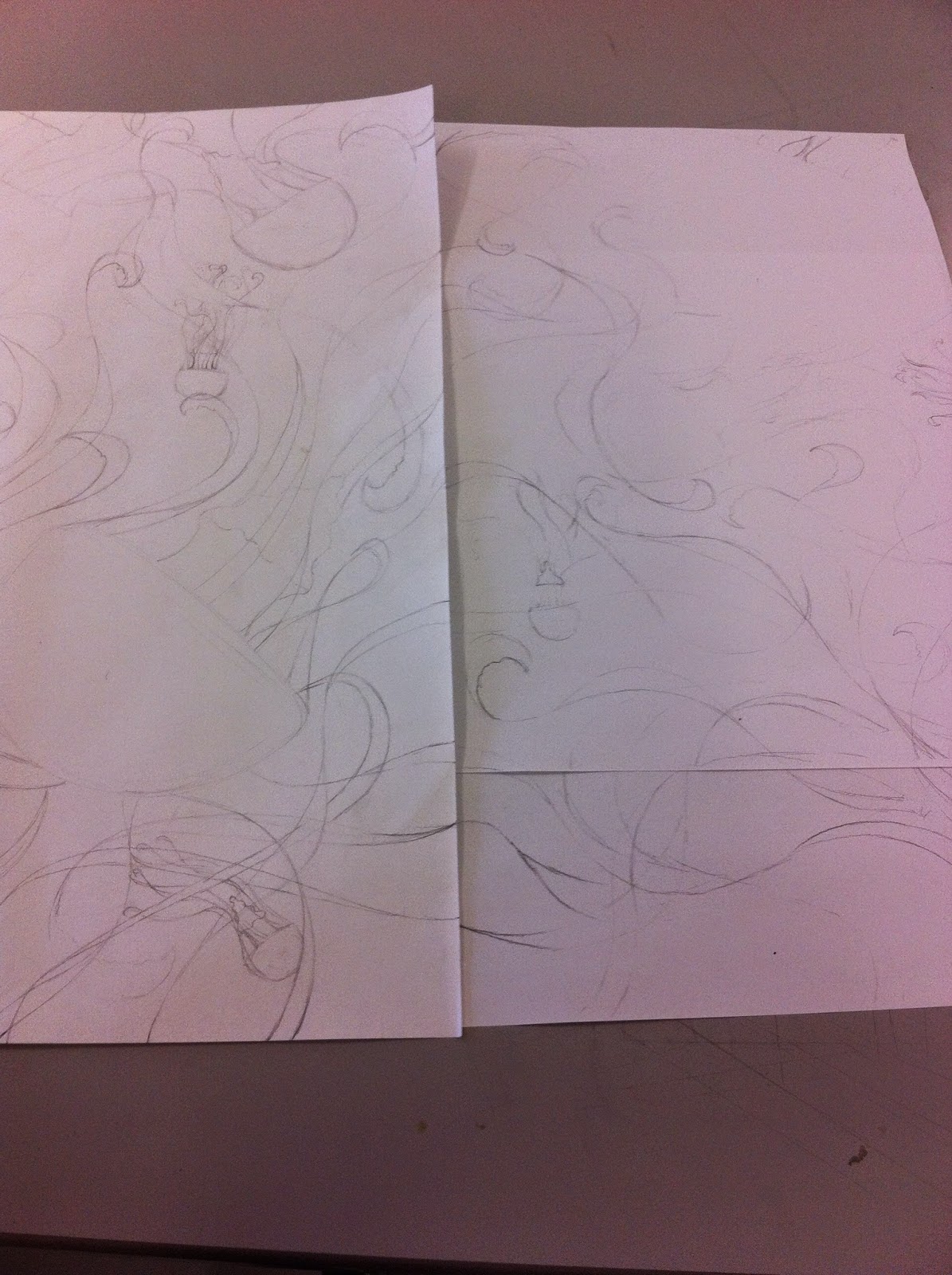 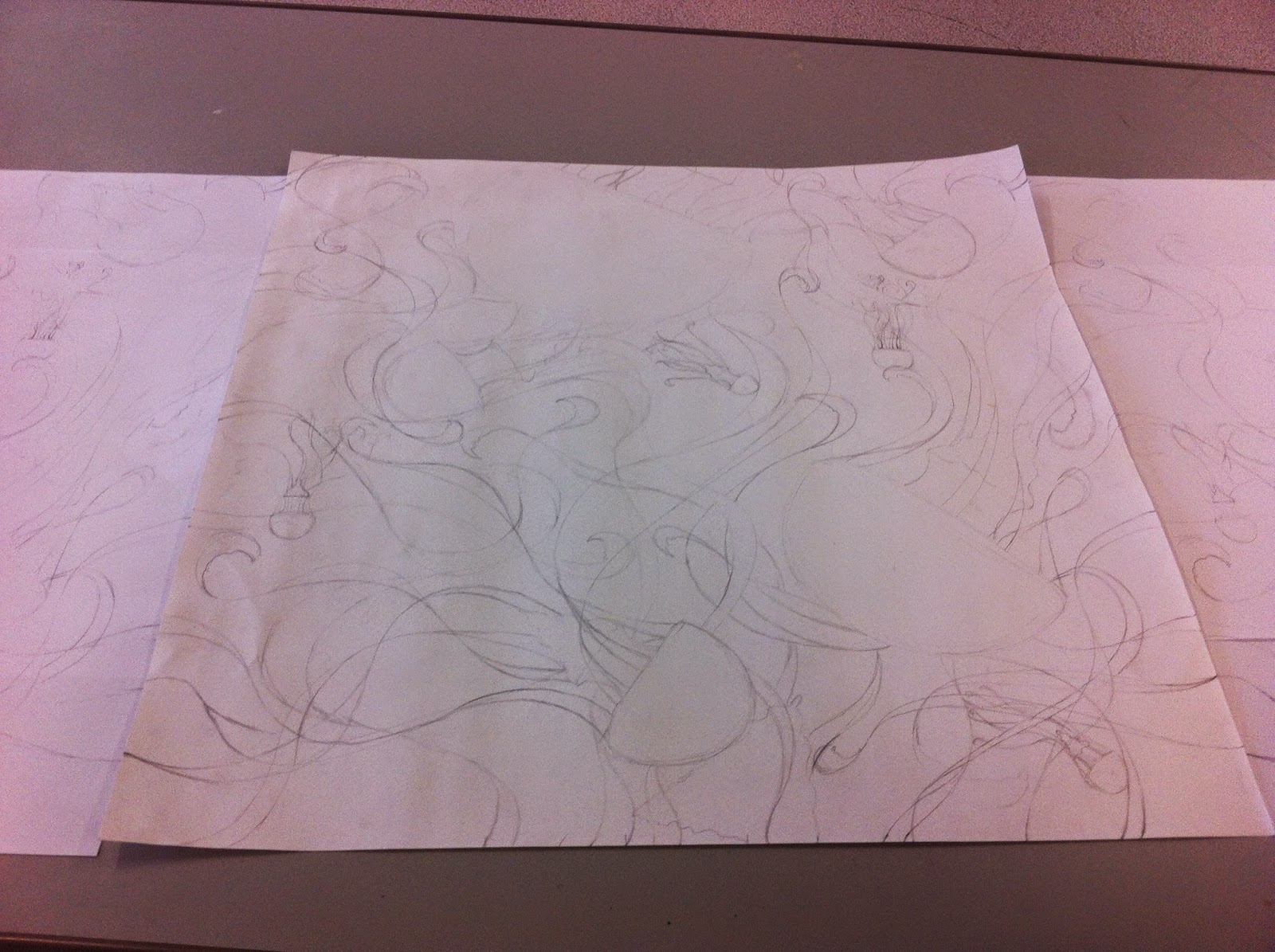 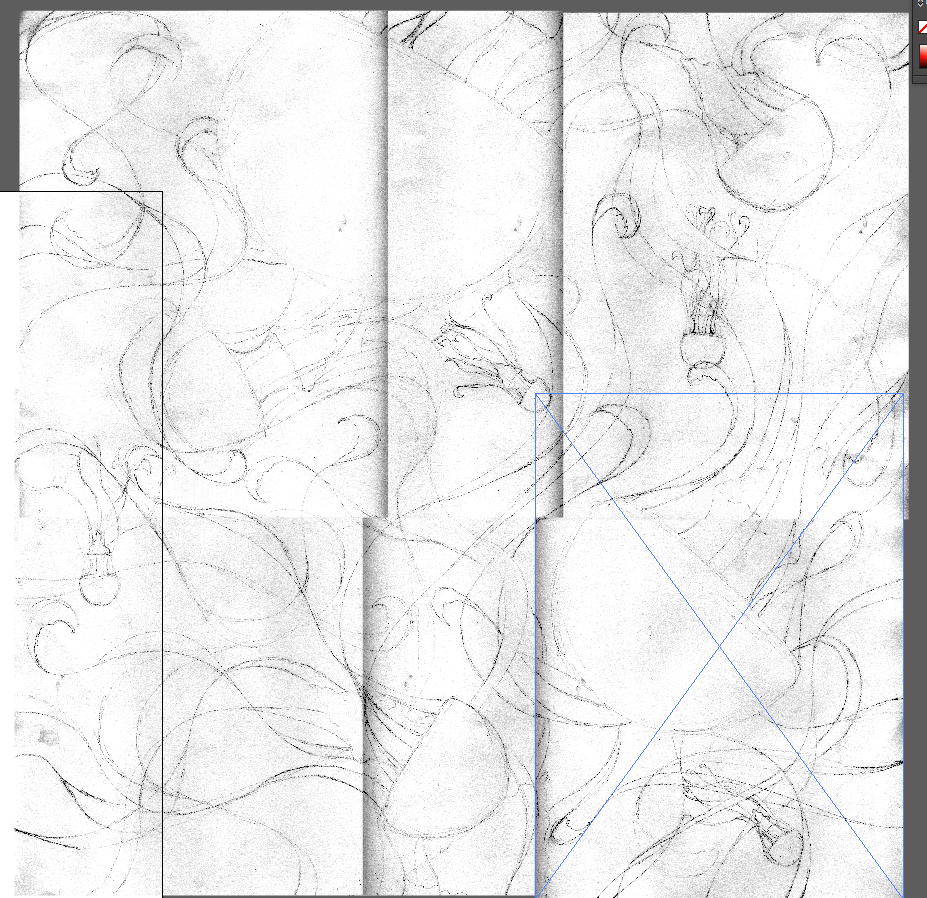 I tried scanning it in and piecing it together digitally so I could see where any of the problem areas were. But the pattern was just too complex to do this accurately. 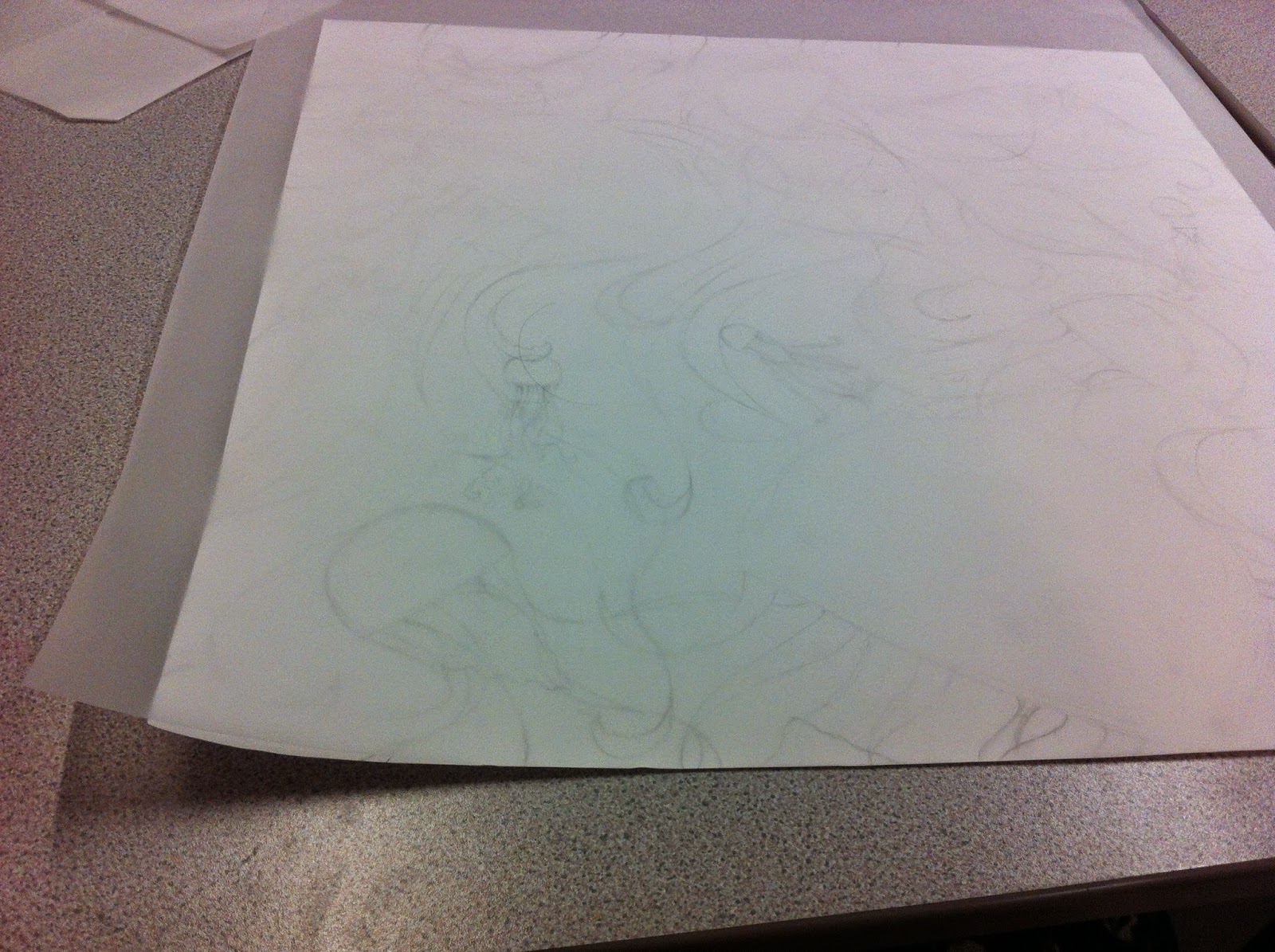 So, I resolved to do it the long way; by hand. I took tracing paper and copied the pattern on to it, numbering each jellyfish so that I could ensure that the suggestion of depth had continuity. 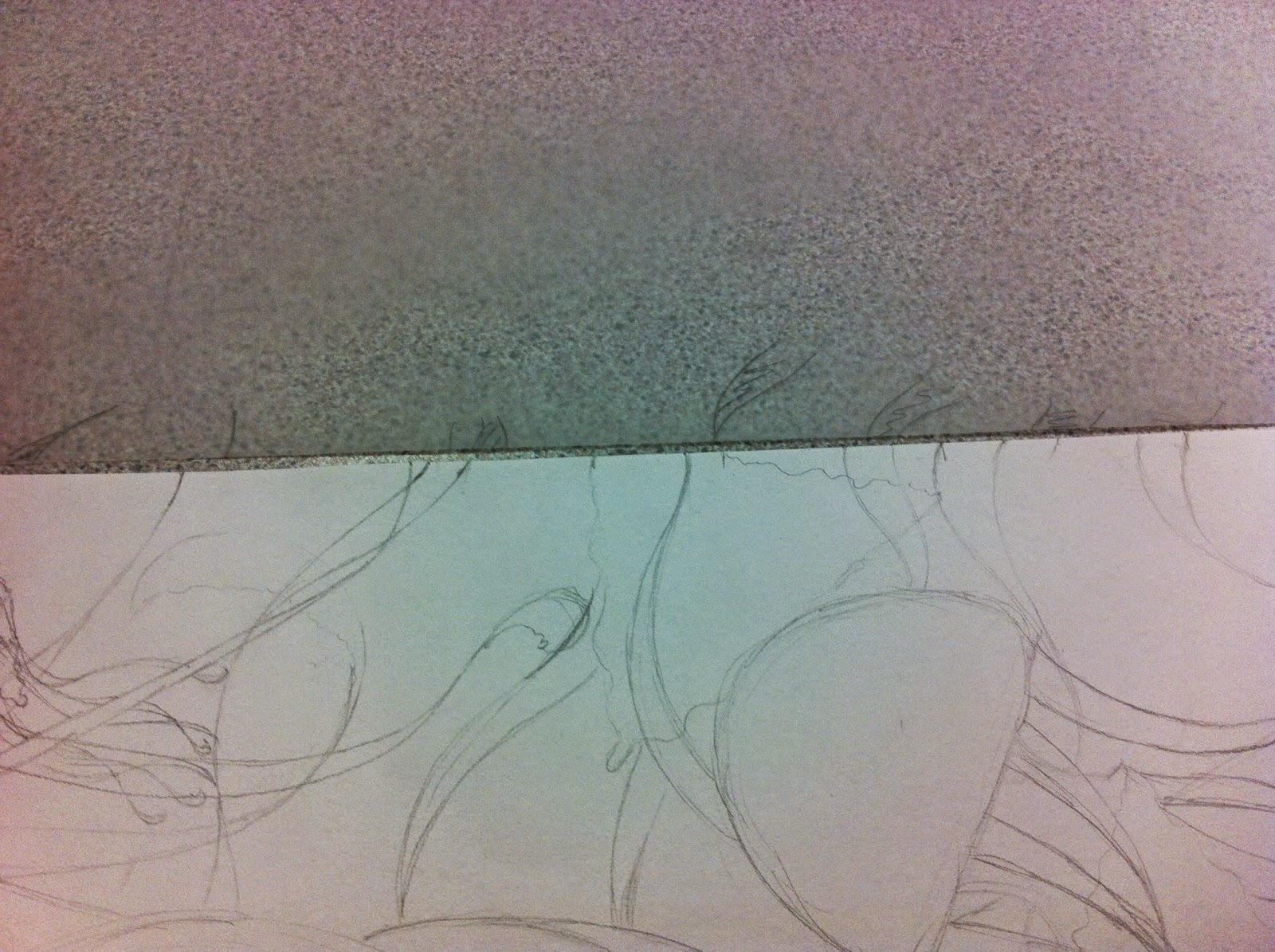 I then took strips of tracing paper and only traced a small area at the edges of the design, then moved this to the other side of the page ensuring that the pattern flowed seamlessly from one side to the other. 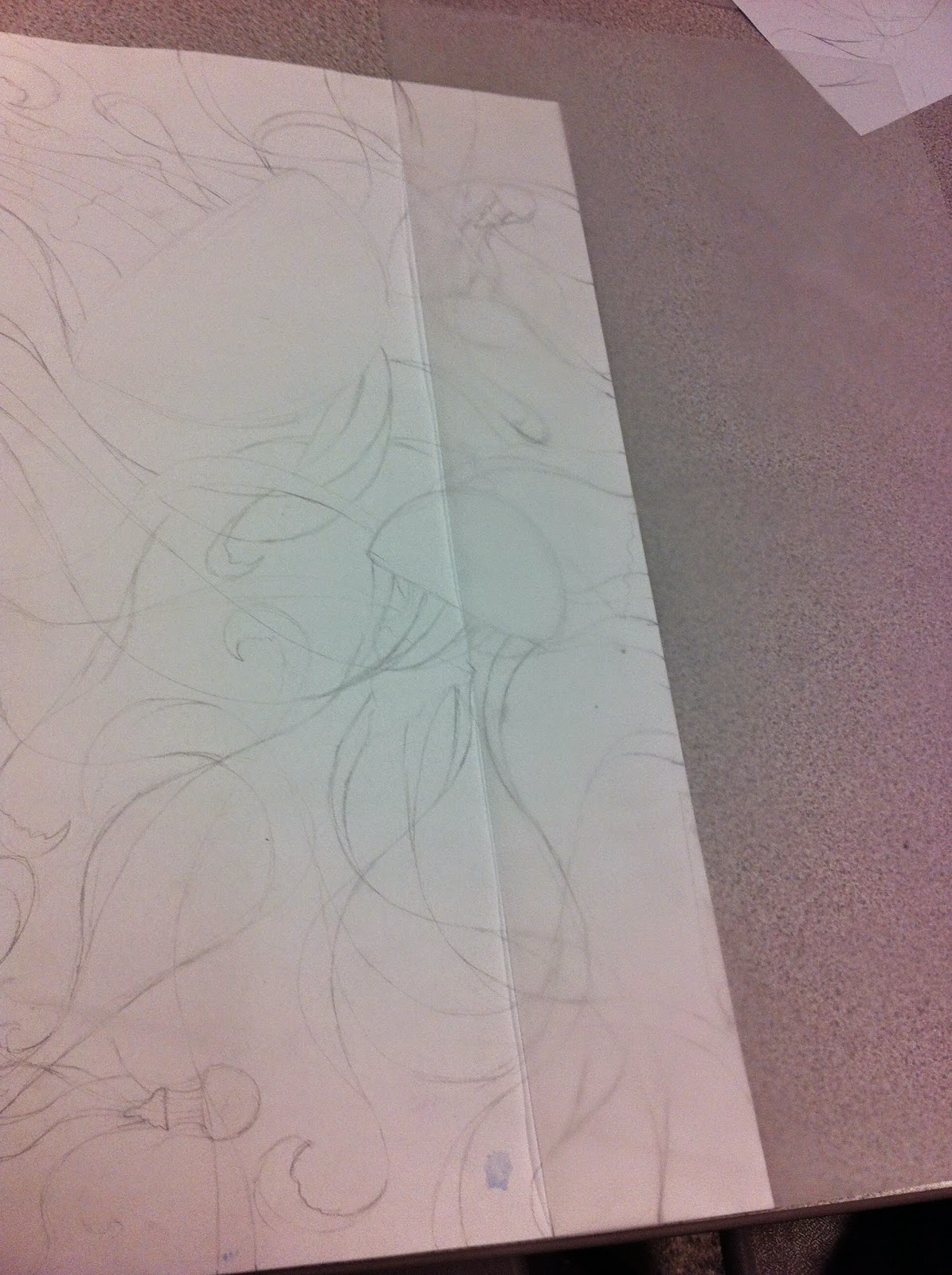 The next step is to mix the two traces on a light box onto some cartridge paper and then work more on the illustration style.