Roz put together the iconography for the menus from the sketches that we made together. Using the circular theme to unite the symbols with a playful manner seemed to work in our favour, creating a link between the functionality of the game and the idea of the world that is being nurtured.

Once Roz had vectorised the icons I went on to look at colouring. This once again proved very difficult and went through many iterations. What really brought these designs together was the use of Fran's hand writing as the font. this is something that we agreed on earlier in the brief but since Fran has said that she will be unable to continue on this brief because her course workload has recently increased. However, she agreed that we could use her hand writing for this project. 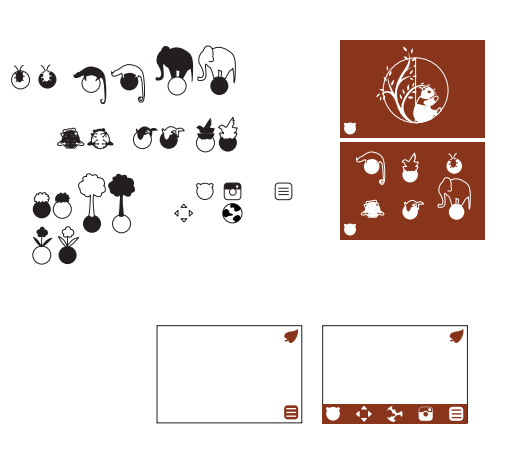 Eventually, after much help from Billie we chose the two tone colours for the desert menus and then altered the hue of these for the other ecosystems. This creates a strong visual connection between them. These designs will be a great way to pitch all of the possible ecosystems but only go into detailed design decisions for two.

I also wrangled with the colour of the menu on the normal play screen. Originally I thought that it should match in with the landscape but this made it difficult to see. I then tried a slightly altered version of the green we took from the WWF website, this would be a universal menu display for every eco system. 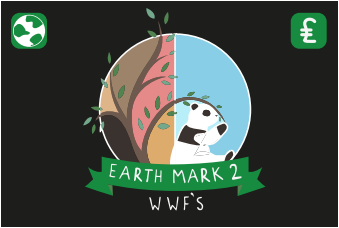 Using the colours from each of the pitched ecosystems I created the home screen visuals. For the main colour in this design i used a green taken from the highlights of the wwf website. This led me to think about how the user would enter into the eco system because originally we were going to have the home screen as a portal to each of the eco systems. So I mocked up what you can see below. taking random island shapes which had the suggestion of three dimensions and playful ripples as if they are moving around. 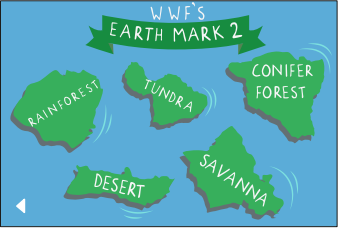 In the end the two menus we mocked up fully were the desert menu and the rainforest menu.