As a starting point for the design of the game I made a list of the icons and buttons we would need for all the functions of the game. 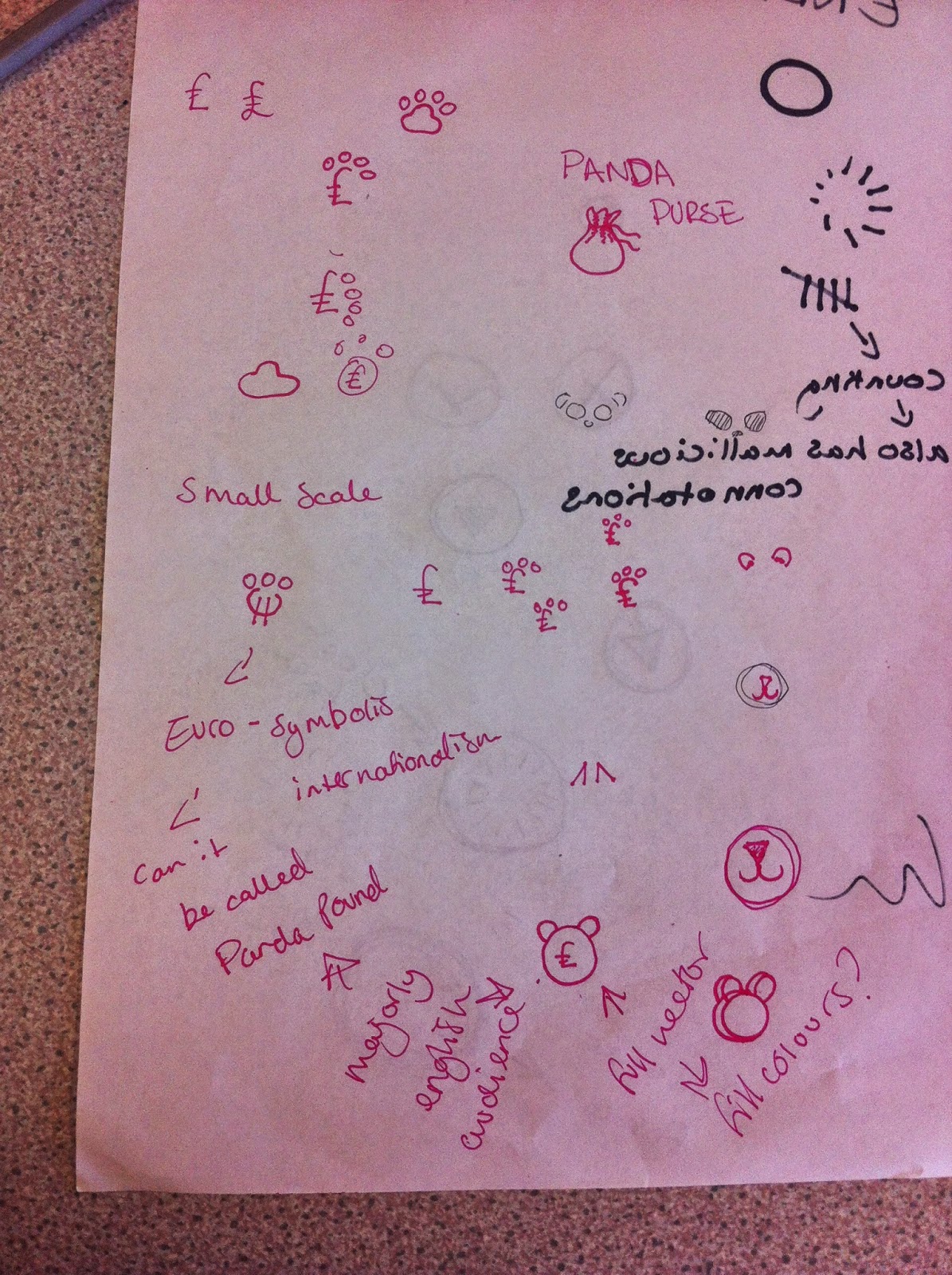 Starting off from the currency of the game (panda pounds). I considered if the audience was only english and if it should be based on the £ symbol. After talking to Roz and Fran we agreed that perhaps avoiding normal currency symbols would be the way to go. This would separate the idea of buying plants and animals from reality and connect it more closely to the productivity of nature and a more innocent concept. This gave me the idea to use a coin rather than a symbol, making the concept of money more childish and playful. 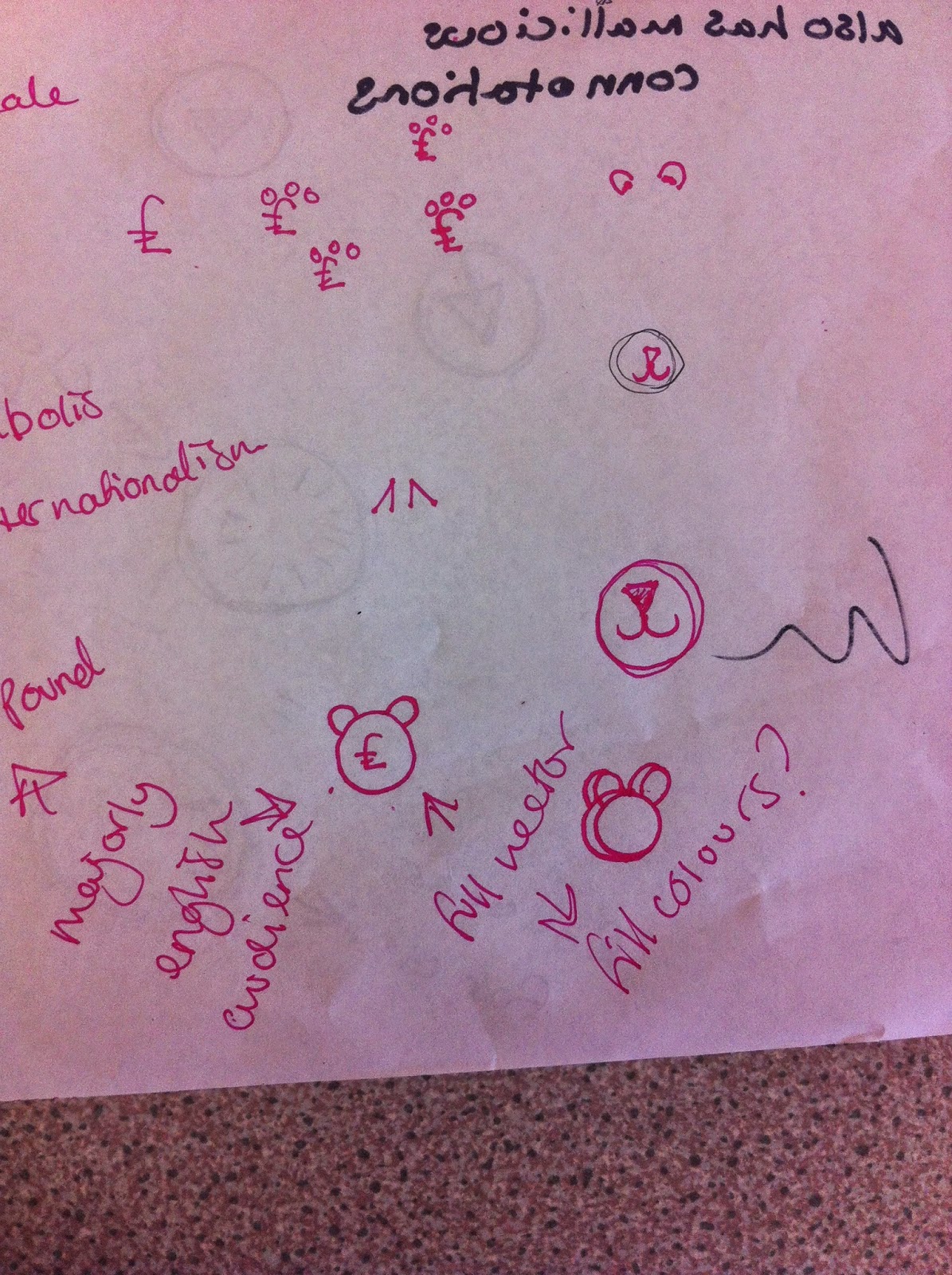 This got me thinking about the name and how I could use this in the design of the symbol and after a few attempts the idea of the ears of a panda on a coin emerged. I think this could work very well at a small scale on screen and has that playful tone of voice that we are striving for. 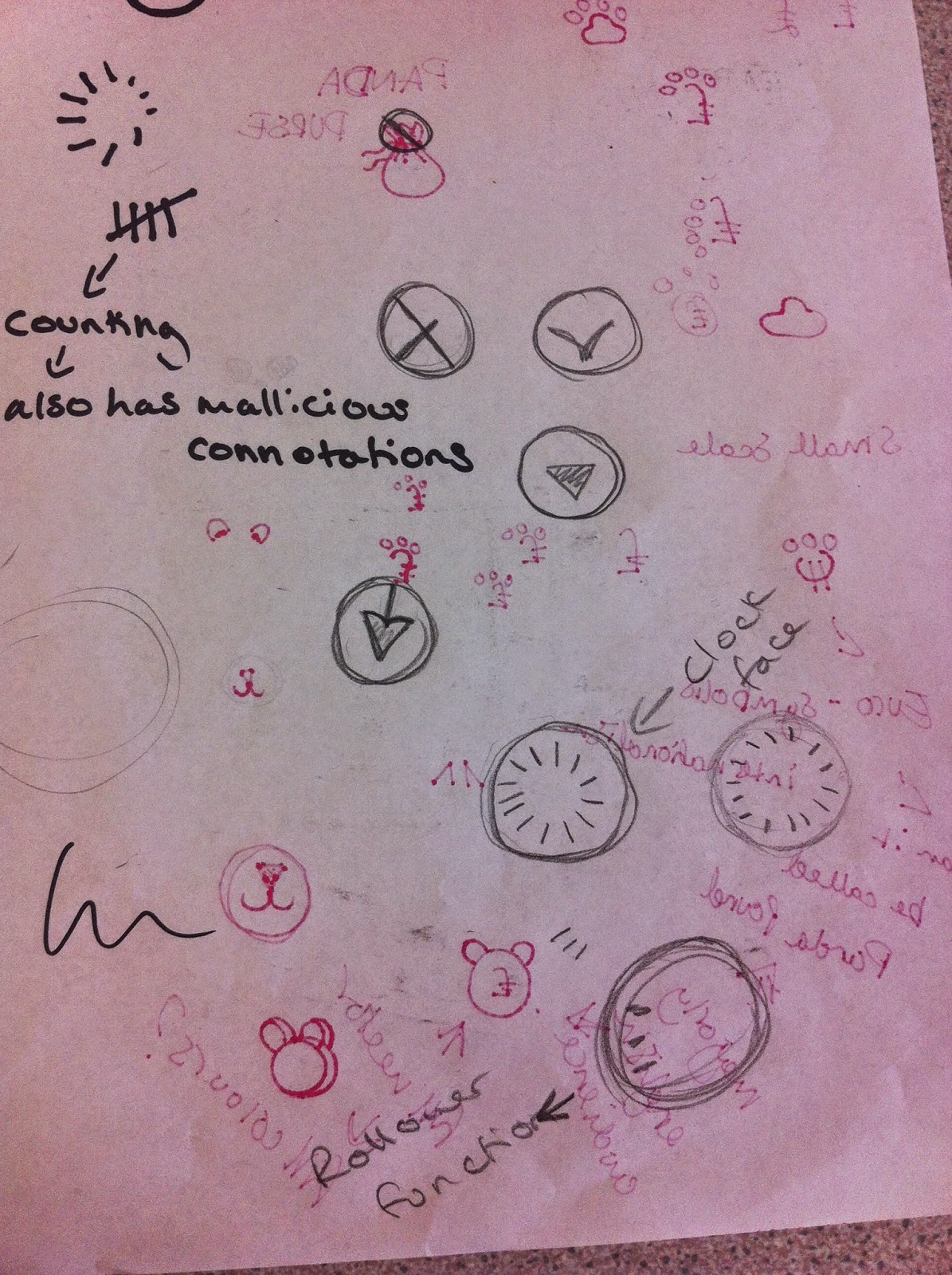 It also struck me that we would need some symbolic way of quantifying the status of each animal. I looked at downward facing arrows that look like animals noses and scratches like counting on a wall. However, we felt that the most successful and the symbol that would be most easily understood by out target audience was the one that looks like a loading giff with its clock face of lines that increase or decrease depending on the endangered nature of the animal. This would overlay over the image of the animal in the shopping menu when the image is tapped. 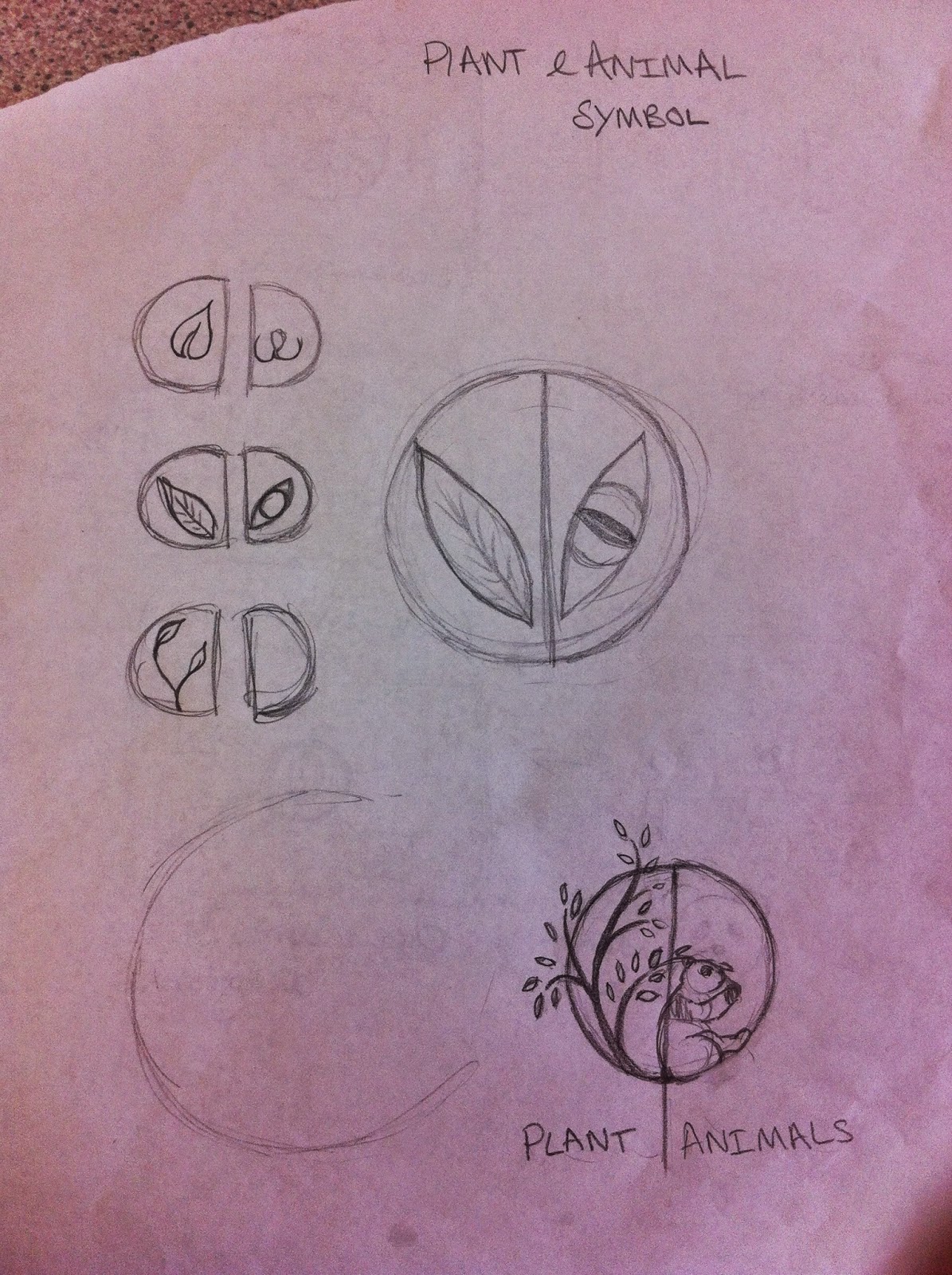 Considering the shopping menu and how it would function was another problem. I started to think about the theme of the game and how the way the user interacts with the game could reflect its central values. From this the idea of a circle immediately came. It could work in sections dividing the type of animals in a spinning wheel selection arrangement and it could work as the first dominant menu option as shown below. It is split into plants and animals, with the circular shape showing the need for balance between the two for an effective eco system. 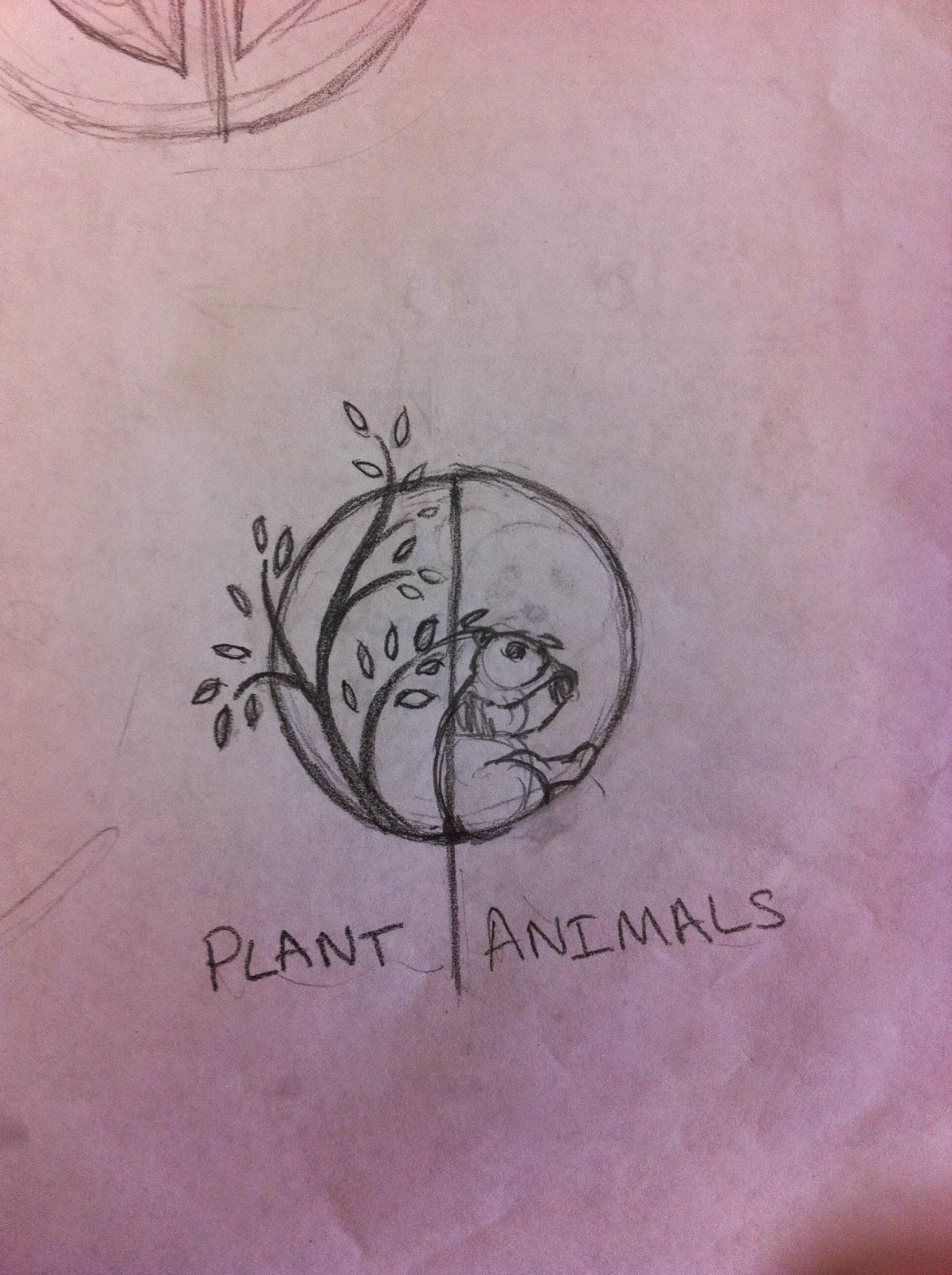 These small thumbnails are just a few first ideas about how the shopping menus could function with this circular theme. It also shows a mind map like arrangement that would show all the relevant interdependent animals and plants that could relate to the purchase of the item in question. 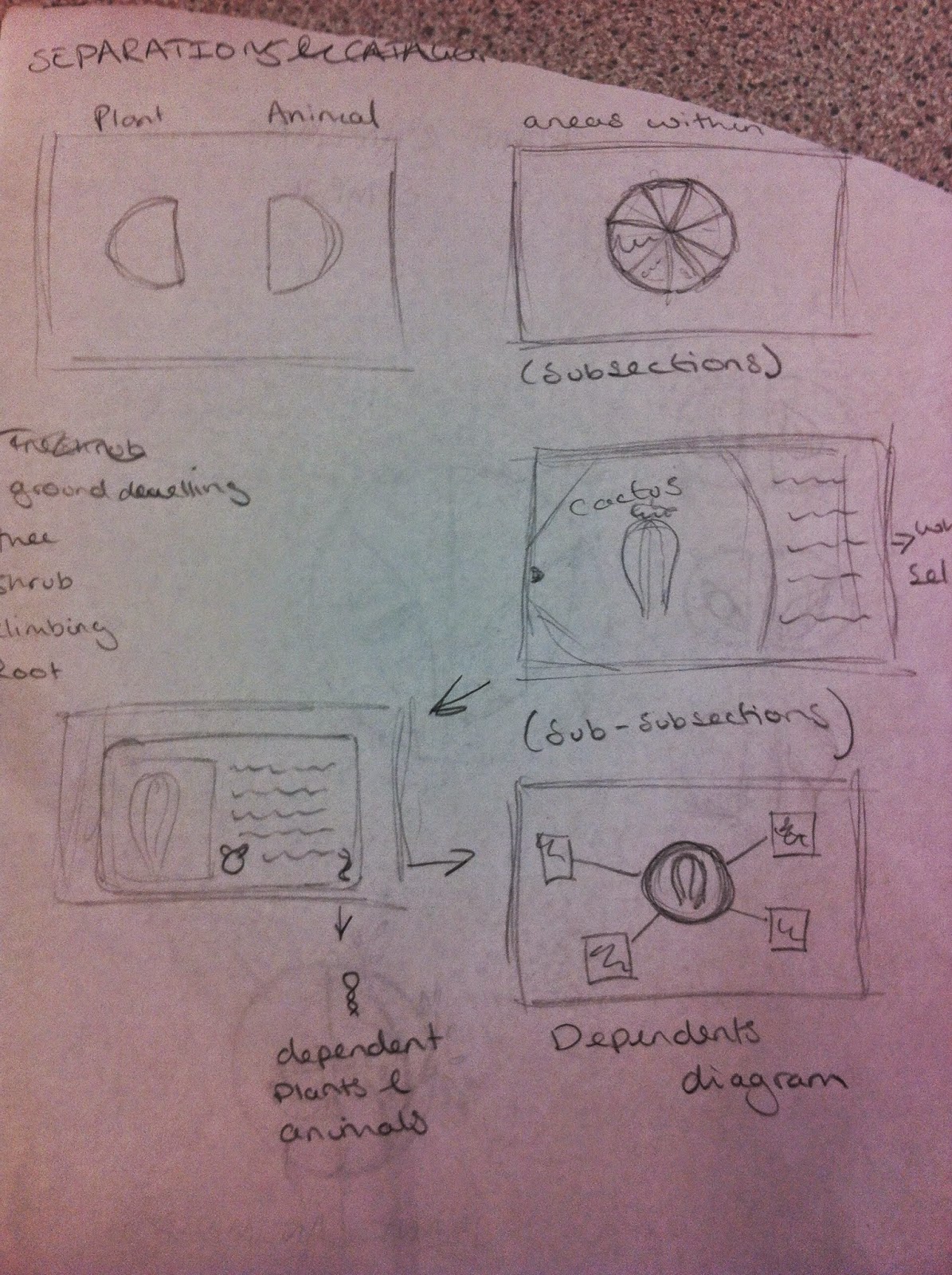 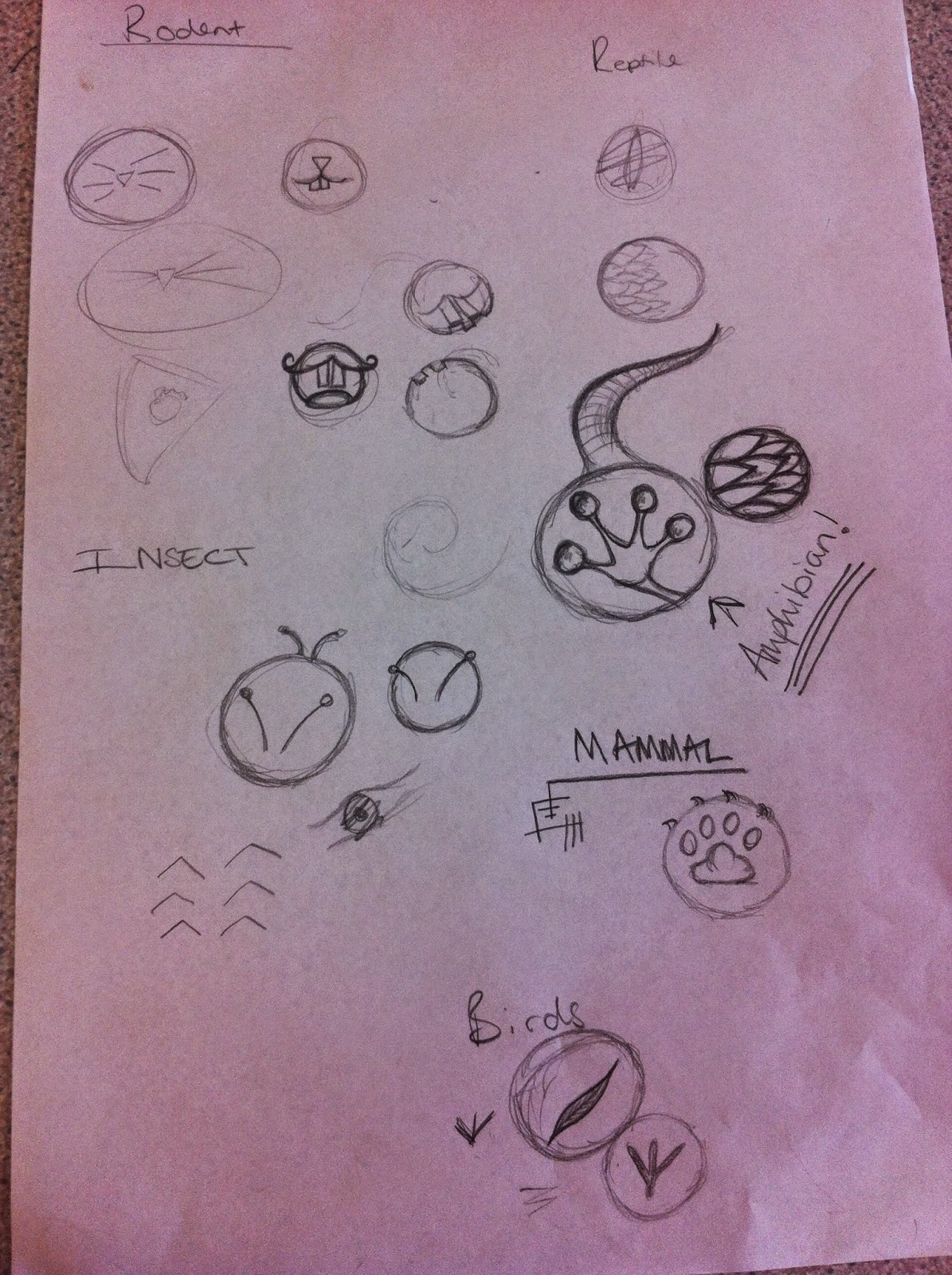 This got me thinking about the tiers of the shopping menu and how the user could find specific animals. I realised that a sub menu for both plants and animals that separated them into further catagorise would be required. I wrote out these categories and started sketching out icons for each areas using the circle as the basis for each. 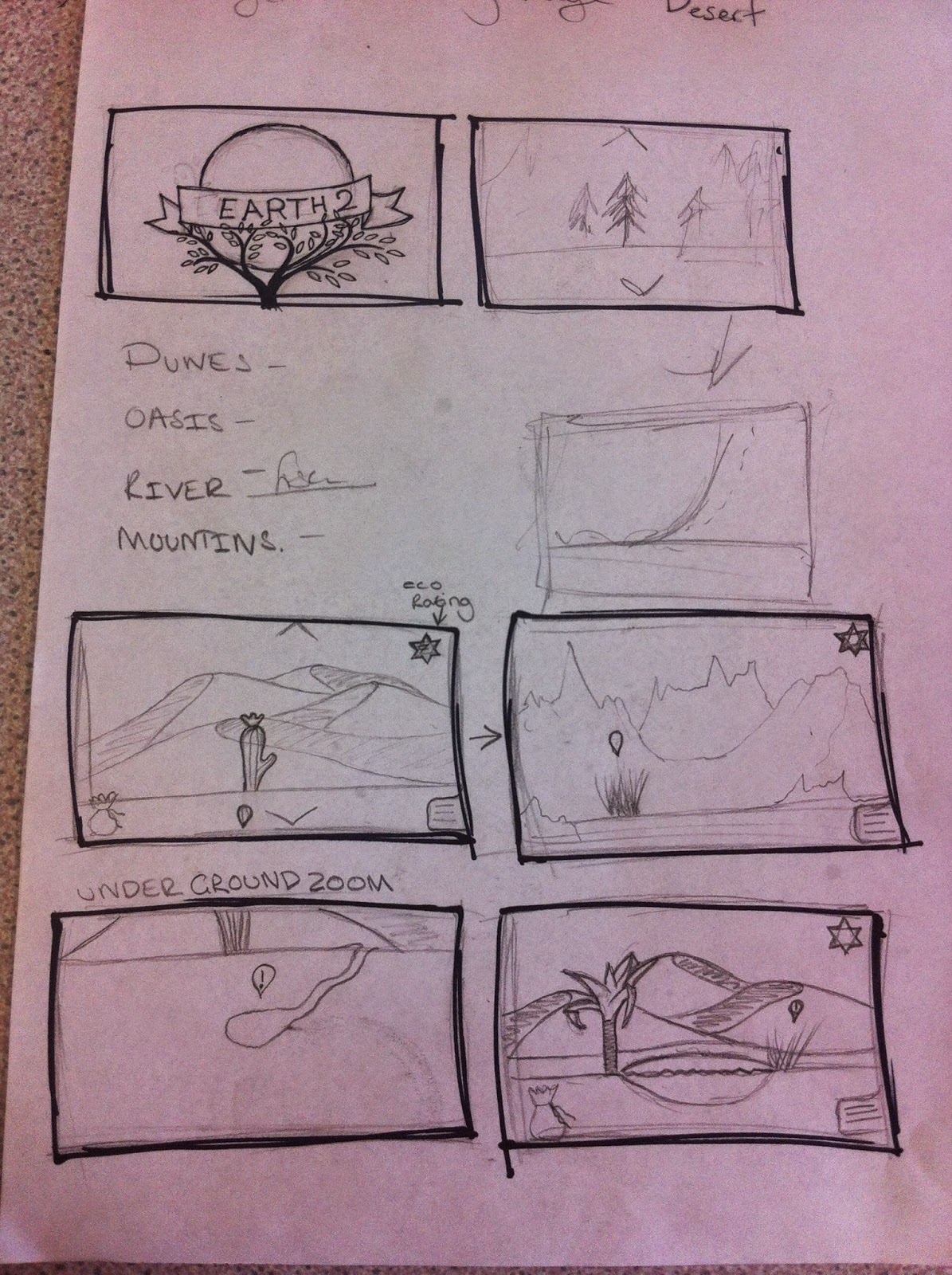 Another issue that we identified was the way that the eco sytems would display in the game and so I started some early thumbnails looking into the way that each eco system would start out and how the player would move from one habitat to the next. We came up with the idea of using small exclamation symbols which draw the players attention to an issue with a particular animal, then the game would zoom in on the relevant area to a relevant scale. 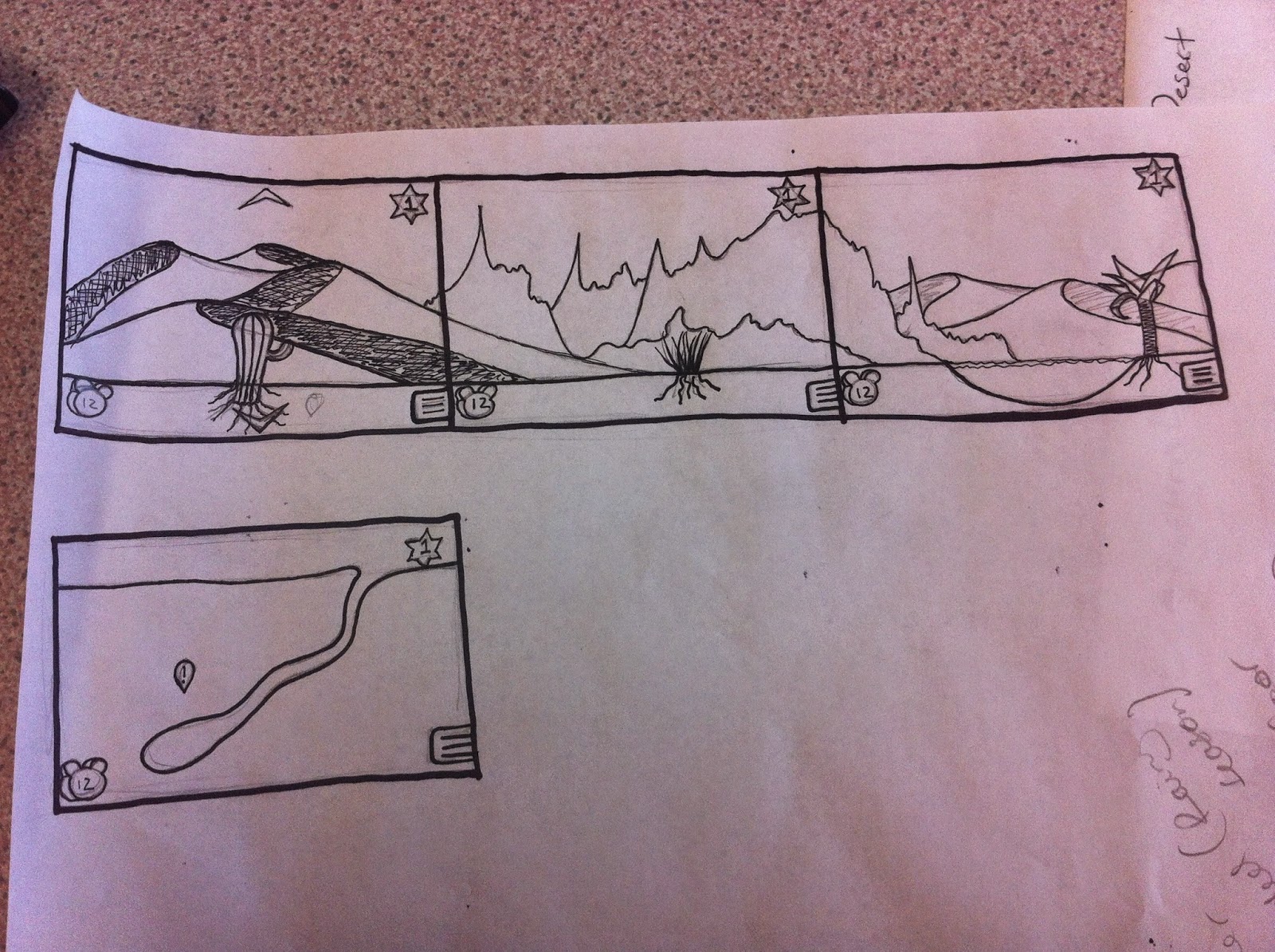 With the rainforest eco system the approach had to change because of the variations in the scale of plants and animals and the shear number of very small plants and animals. This gave rise to a grid of views that would interlock but be at different scales. I think this could be a much more effective way of approaching moving about within an eco system and making exploring them more interesting. 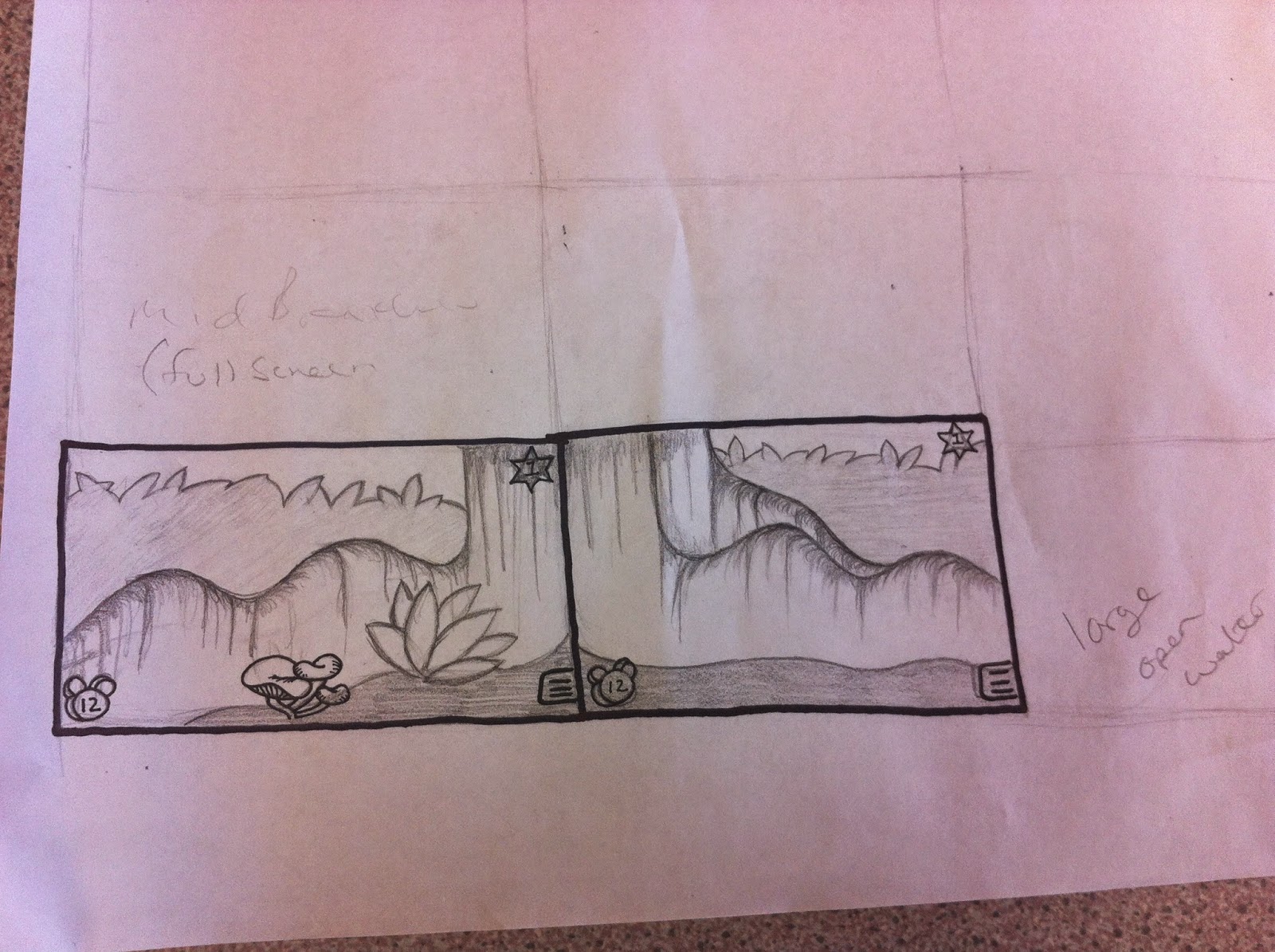