The designs below are the ones I am intending to take to the final crit. The colours vary between the to scale print out and the samples in the frames, this is because to get the colour I wanted they needed to be printed on a black and white printer (as was found in my earlier development) yet to get a good sense of the frame they were intended for the frame mock ups had to be in colour.

The concept that was the catalyst for these designs was the choice of something physical over something digital. In a digital age the act of printing out a photograph instantly instills it with value because it is not simply a file on a memory stick or Facebook. So, I decided to use the paralleled aesthetics of photographs and illustrations to express this, using the eras of the 40s, 50s and 60s for these photos not only because the help represent the established essence of the John Lewis brand but also because they would appeal to the historically aware tarot audience. It could also be said that representing these eras champions the concept of the physical over the digital by showing the positives of times when printed photos were the only option. In this way I decided to communicate a concept that sold the idea of a photo frame not simply the frame the design is sitting in.
The Audrey Hepburn with winged sun glasses was selected to represent the 40s and it fades into a pen drawing. Pen was used because of its precise crispness the captures the neat and starched look of the 40s. 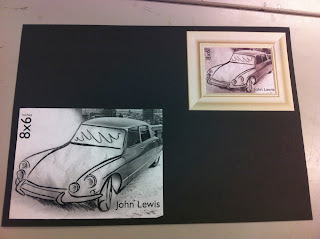 The 50s are represented by a citron ds fading into a charcoal drawing, this media was selected for the drawing because of the way the fast flowing lines communicate the concept of speed and movement, capturing the essence of the design of the car. 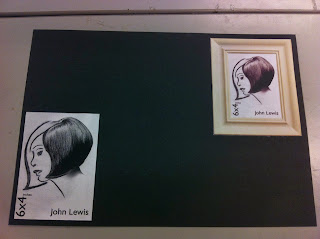 There are a lot of stereotypical icons that I could have used for the 60s but in the end I went for the Sassoon bob because it was slightly less obvious than mini skirts and twiggy and it seemed to suit the classic look of the John Lewis brand. I used charcoal because it seemed reminiscent of quick fashion sketches and allowed concise communication of the architectural lines that make the Sassoon bob so distinctive.