The box design only changed slightly from its original, The stripes having more variation in colours, this was because the brown packing paper that we used o cover the box wouldn't take the colour yellow properly so we cut out sections and replaced them with sections of white paper coloured yellow beneath. More colour and variation was needed to create that colourful comic book/fairground look that we wanted so we added blue and red with an erratic couple of sections with that dotted comic texture we had found in earlier research. I am really pleased with the finished result an the only thing I would change would be to allow more time for the production of the packaging because it was a bit rushed as the letters took up most of the day we had allowed, so the finish of the design could have been a bit better. 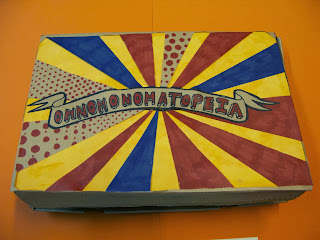 The inside of the box looks fantastic and really communicates the idea that we are creating the experience of the onomatopoeic words. The black frames with the black pen and ink drawings work brilliantly and have not changed from our earlier ideas much with the slight exception of the orientation of the words with the capitals much larger than the rest of the word. 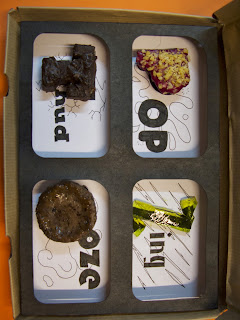 The only thing that I am unhappy with is the jelly in the Z. It has lost its solidity and capability for holding its shape, this could have been avoided if I had cut the letter in college and transferred it directly to the box. However, this could have caused even more problems because it would have been impossible to keep making the knife hot for cutting so I think the real problem was cause by using jelly. It is difficult to work with when you are doing something simple so possibly it was over optimistic to think it would go well! 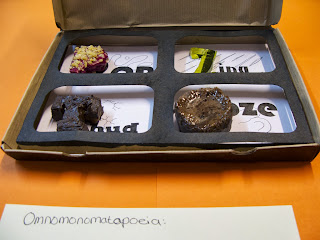 Overall I am content with what me and Roz managed to produce, because although some areas of the presentation could have been better, the concept was strong and we did war we set out to do. I also like to think that this is an idea that has possibilities commercially; it would be a great addition too the graze boxes, it could be an entirely new range. The people that won the edible type really deserved it and the designs were great but neither Roz or I were particularly disappointed because we knew we had created something interesting and inventive, so for us this project has been a big success. 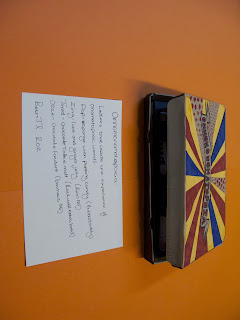 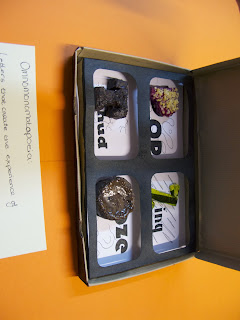