Collaboration Partner: Billie Meredith
After talking with the SU about the possibility of using Risograph printing for the elections campaign Billie and I looked into fotprint printers in Leeds as one of the main Risograph printers we were aware of. When we loked at their website we had our concerns about the scale of the job we would have for them, but thught it worth getting in touch to talk through the project and pssible pricing. 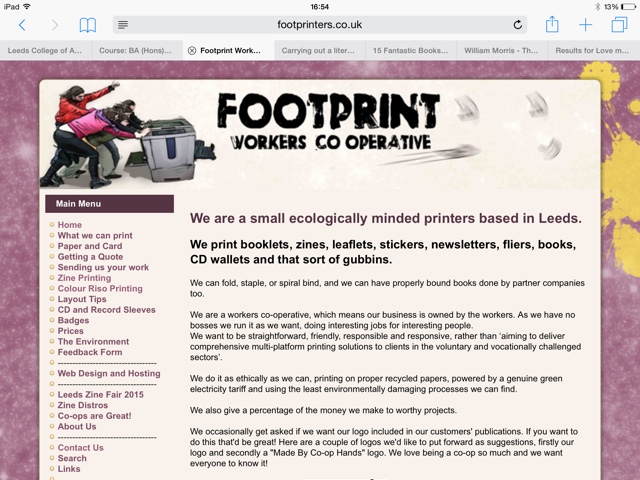 I emailed James who it turns out used to be a students at LCA and we aranged for Billie and myself to visit them to talk everything through on Friday the 16th of October.

However, after a lengthy walk to their location out in chapeltown we arrived to find that James was ill and no one could talk through our project with us. I offered to leave my number so we could be contacted mor directly than email but they said that email would be enough.

After looking at their set up and how unprofessional they seem to be I really think that this owuld be the  wrong job for them. We have too much of a tight deadline and to much to print for the small scale set up they have. I think we will go on to research some other options for printers but pssibly maintain the risograph texure because it is smething the SU and myself were so set on.
Posted by Beth Taylor at 10/18/2015 09:05:00 am