We got together with another group in our class and informally presented our ideas for solving our brief. We presented the mock ups for the app, envelope, booklet, key Ring and stickers. The response for the majority of our work was extremely positive, although there were a few things they brought up and we discussed in detail.

They brought up the fact that we had used a swear word and asked us to justify it. we found that they agreed quite strongly with the fact the most freshers students are bombarded with leaflets and other bits of information and having something that pushes the boundaries of the acceptable and is completely unpatronising at the same time would create a much more positive response than a more average bit of propaganda. The also really liked the variation on the title we had created as a fall back, if in our crit they said they felt our original title was too much. They suggested we integrate 'SHHH...IT'S GONE' into some parts of our pack so we were not using the word 'shit' quite so much, which they said could get a bit old if we were too repetitive.

They also asked us why we had decided to use brown envelopes instead of white ones because the rest of our designs were whit on black. This really got us thinking because we knew we loved the look of the black print on the brown envelope, but were not quite sure why. After further discussion were realised that the most common link to a brown envelope is official business such as school reports and pay slips. By placing this in your face statement and graphics on a symbol of formality and 'the establishment' we created the tongue in cheek tone we wanted. Now that we have become aware of this we plan to start implementing this juxtaposition of the formal and striking in other areas of our designs. 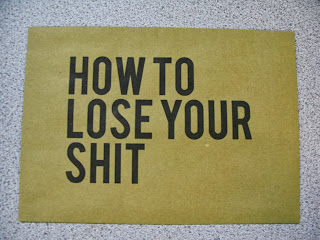 They also brought up the point that if someones valuables were stolen, could the thief not simply remove the sticker? We agreed this was a valid point but when we showed them the very simplistic and anonymous designs we had produced for the stickers they agreed that the lack of awareness of the technology that provided the tracking the the fact that you could not simply tell what the stickers were intended to do from their basic design combated this problem.

The also came to a decisive decision on the door sticker designs. 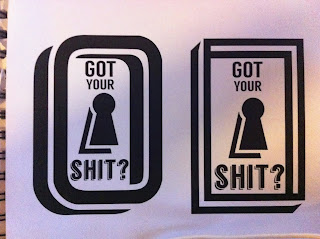 We showed them this sheet with our two favourite designs and they instantly said that the angular one on the right work best with the other designs for the pack. Although they said they may like the other one more if it were separate from the pack, the continuity of design was crucial to the success of the product.