There were approximately ten of us in the group for our crit and each person got a chance to briefly talk through their font and the word they had been given. They then went on to explain why and how they carried out their research and how it lead into their concepts and eventually their designs.

In general people had really considered the unexpected way to take their designs and created some surprising work. However, one theme that people often picked up on was the fact that the designs created were not as subtle as they could have been, often because someone had only considered designs in upper case or for header text. We agreed that the lower case lettering was something we all had to go away and reconsider.

The feedback I got for my designs was largely positive but also surprising. I was told that by far my strongest and most promising concept was that of the letter cutting or damaging the eye of the reader. I love this idea but the visuals I had come up with to communicate the concept were more than lack luster. However, as a result of this feedback I will revisit the idea and try and come up with some more effective designs. Below are the starting point ideas for this concept that I showed at the crit. 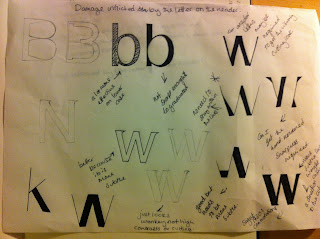 People also seemed to really like the subtlety of my "overused" designs, and specifically the one where I rounded off the edges to show ear and tear of the letter, they seemed to like the simplicity of the visual. So I have decided that when developing each of my visual ideas I will go through a process of simplification and purification to try and capture the essence of what I am communicating. Below you can see the 'h' that has the slightly weathered look that people liked. 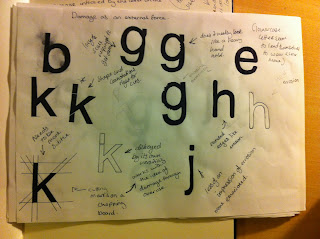 They also suggested many routes for experimentation for my design development. For example, looking into old signage, like painted weather-beaten shop signs, physically creating letters in some way and allowing them to be damaged by water and wind and other forces of nature. Experimentation with different media was also suggested, such as photography and painting, not just pen and ink.
Posted by Beth Taylor at 10/12/2013 10:17:00 am