The seminar began with a discussion of what we looked for in a really legible type face or font, these are the criteria we found we all had in common.
. Ease and flow of reading with little thought.
. A defined difference between ascender and x-height.
. The bigger the differences between the glyphs the easier text was to read.
. The size and nature of negative space within and between letters in areas such as counters.

This the developed into the analysis of distance and its effect of readability.
(image)
By placing different text samples on the walls of the studio we found that lower case was more legible over a greater variation of distances. Where as capitals were readable from further away, when moving towards text it remains legible for a large proportion of the approach and at very close proximity. This could be said to explain the use of all lower case lettering on the county's motorway signage.

The samples we were using were roman, gothic, script and wood type. By analysing these samples using the criteria discovered earlier in the seminar we found that the most legible fonts were the gothic and roman ones. this often seemed to be because the counters in wood type were often too small for ease of legibility and the glyphs of script fonts were to similar to separate from one another.

The wide nature and small counters of wood type was testament to the fact that negative space in lettering is usually the thing the eye reads, rather than the letter forms themselves. Some examples of the clever use of negative space in branding are shown below.

We were shown a number of images where kerning and leading had been abused, which I found very difficult to see the absolute flaws in. Although I could see that they were ugly and hard to understand, without the context of the design how can we definitively say that the design is wrong? For me the context and purpose of the design is quintessential to identifying its level of success although I am aware of the argument that the purpose of all type is to be legible and 'invisible' in its communication of the words but part of me is repelled by the sudden assumption that this is the only rule to be applied across all uses of text. I know that these rules are grounded in years of experimentation in design and that I can in no way suddenly over turn them but I would like to keep an eye out for examples of where these rules have been broken and how successfully this has been done in relation to the context of the design.

The images below shows the way distance effects which type is most legible. 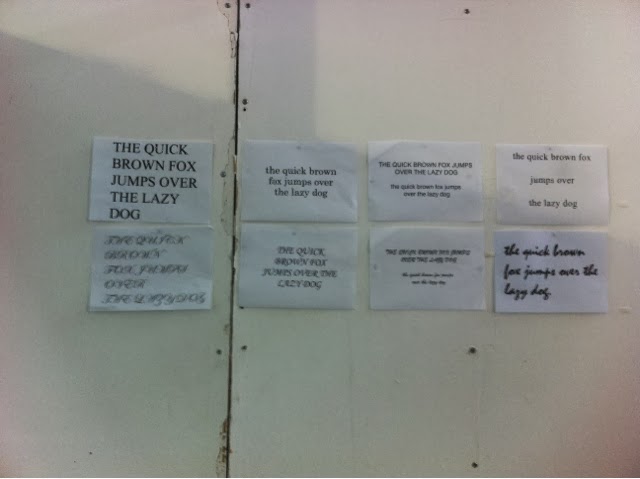 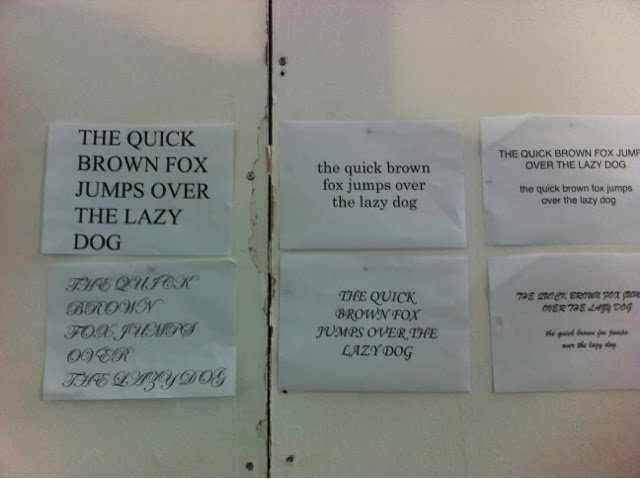 Type Glossary:
(because we are told about more type language in each seminar I have decided to add a type glossary to each set of lecture notes to record the increase in my typographical factual knowledge)
. Leading-the spaces between the baseline in body text.
. Kerning-spaces between letters specifically reducing it (this has only become possible with digital technological proliferation because reducing the width of lead slugs was practically impossible.
. Tracking-the increase of space between letters. 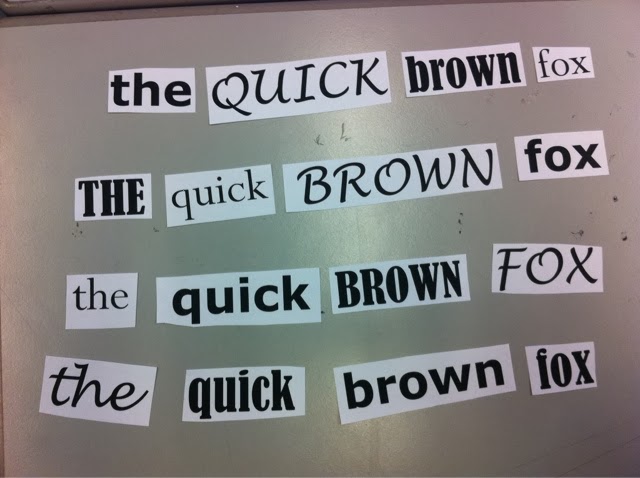 The image above is the starting point for a task due in for our next seminar. We must digitally create each of these lines and effect the order in which the words are read by only changing the size and positioning of each word.
Posted by Beth Taylor at 11/12/2013 07:09:00 am