The three books I selected were: Simone de Beauvoir by Ursula Tidd, The Society of the Spectacle by Guy Debord and On Anarchism by Noam Chomsky. To start with The Society of the Spectacle held most of my attention, simply because I briefly studied it at A level and it interested me greatly then. However, I soon got pulled in another direction. From reading the intros of each of these books it became clear to me that the reason to read these books is interest and enlightenment. People seeking to inform and better themselves. In this case is not a distinctly academic appearance exactly what is needed? But the question of intimidation also arrises. Does this academic appearance scare people off and stop them from reading said books? In which case does a balance need to be struck between the academic and serious appearance and the inherent interest of the subject matter? 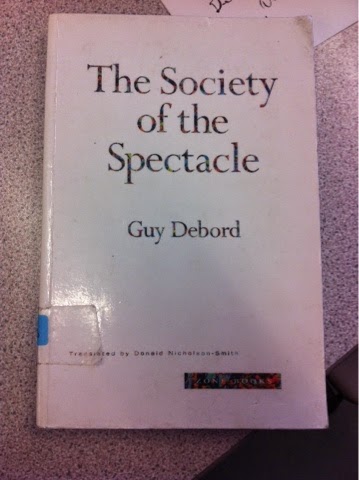 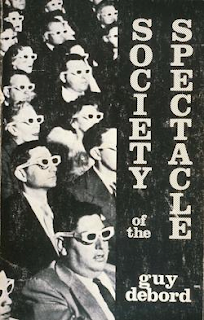 Although I read the introduction I was already aware that the theory was very dense so I went on to do some online interest with some more general explanations of the themes in the book. I am already aware of the idea of people seeking to represent themselves to others and constantly living a representation of live rather than the life its self. I am also familiar with the idea that reality and its representation are so tightly wound together that differentiating between the two can be nigh on impossible, and there in the danger lies.

I found a great summary of one of the most interesting theories to be conveyed in the book which can be found below. Found at http://culturalstudiesnow.blogspot.co.uk/2011/05/guy-debord-society-of-spectacle-summary.html

These are some fascinating theories that are spread throughout this book and that is the main issue that I am struggling with for this book. There is so much to focus on that to try and represent one thing would be to ignore everything else which would be to the detriment of the book. The over-arching theme I suppose is the creation of  a fake existence which then we try and emulate and model our real existence to. But how to represent that?!

The clear relation of this theory to modern day social media is a possible link to make visually. However, this could be seen as interpreting the theory for the reader which takes away so much of the experience. Perhaps a certain level of ambiguity is required to create a cover that communicates this theory but only truly is understandable as so when the reader has understood the theory. Something else that might be a root for communication is the  fact that this book, although written in the 60s is incredibly relevant to today.

I also found this podcast that examines the theory and attempts to pin it down. It provides a bit of background information about the culture at the time of writing and the entire society of spectacle and thew ay it changes us. A great way of describing the centre of the theory is the way social interaction is becoming increasingly falsified in that the 'spectacle' is something we both construct through representations and allow to constrain us and shape our social interaction. In this way it becomes false because it is no longer something that the individual creates. However, it is important to understand that the spectacle is not necessarily something negative, it is worth thinking about the possibility of a society existing without a spectacle of society, is that even possible. Rather should the spectacle be seen as a manifestation of something deeply set in the human condition.

I also found this article that help explain the theory in yet another different way but I believe is helps when considered alongside the podcast to pin down the basics.
http://www.theguardian.com/commentisfree/2012/mar/30/guy-debord-society-spectacle