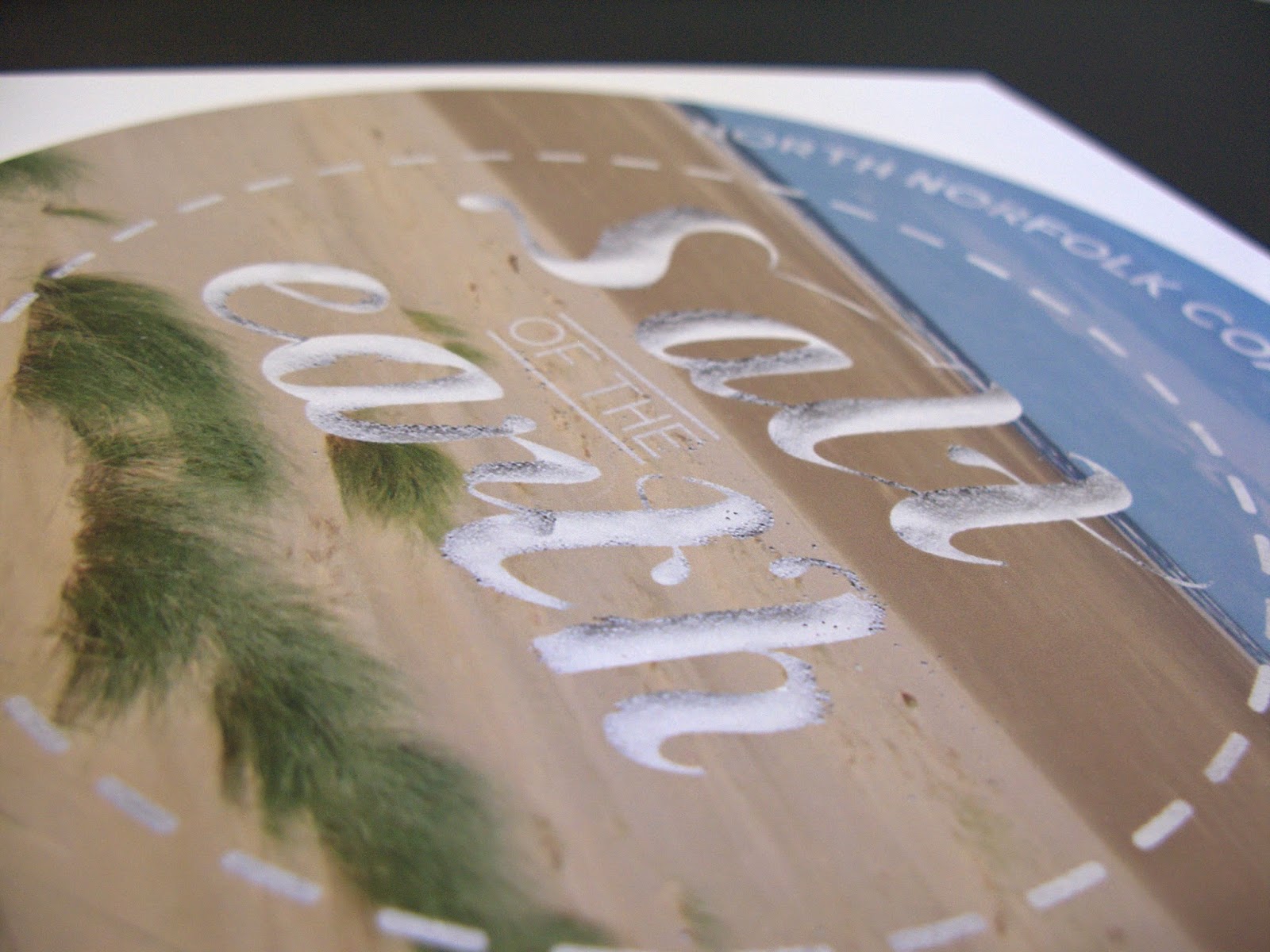 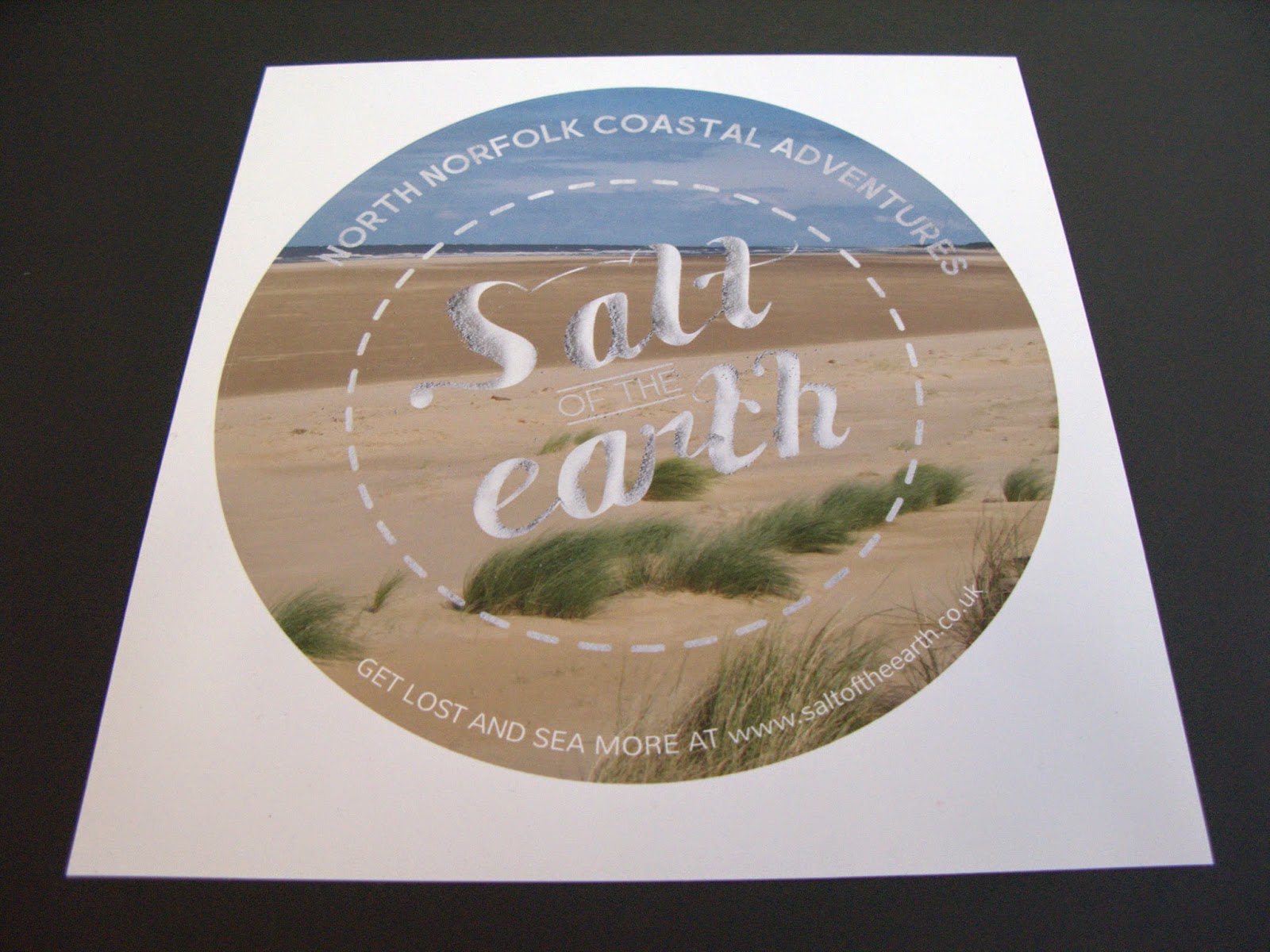 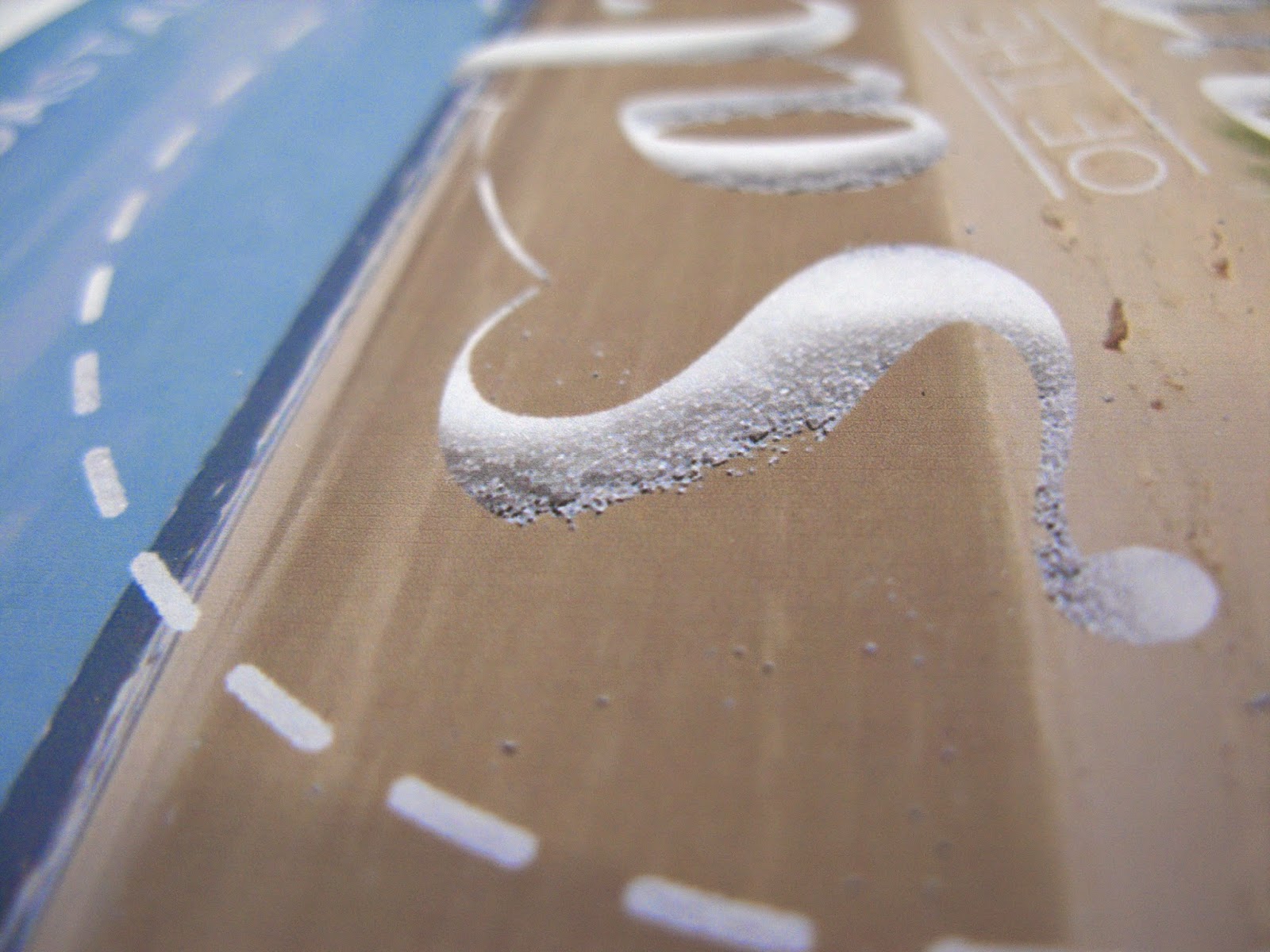 So the final outcomes are the table sticker, 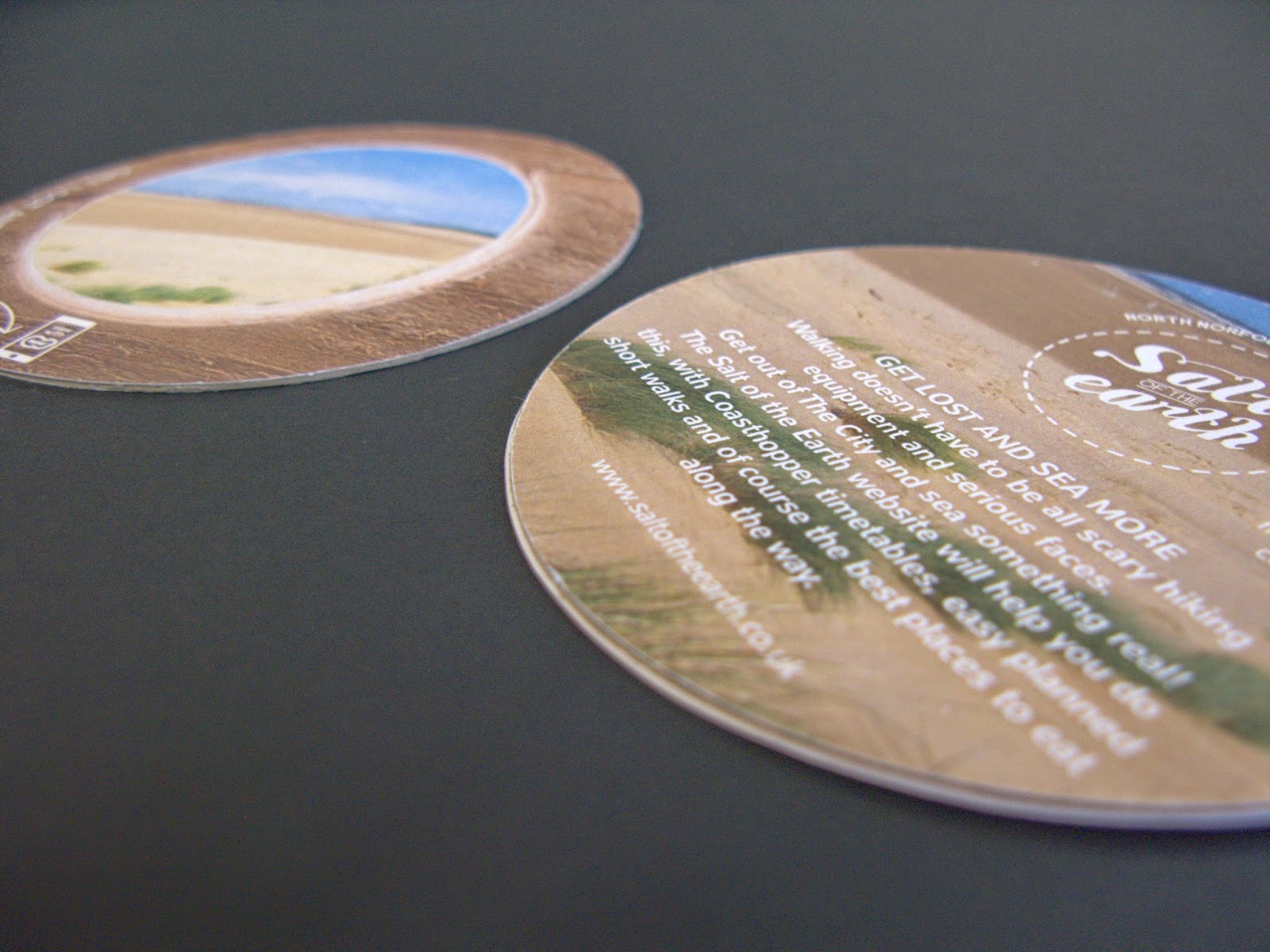 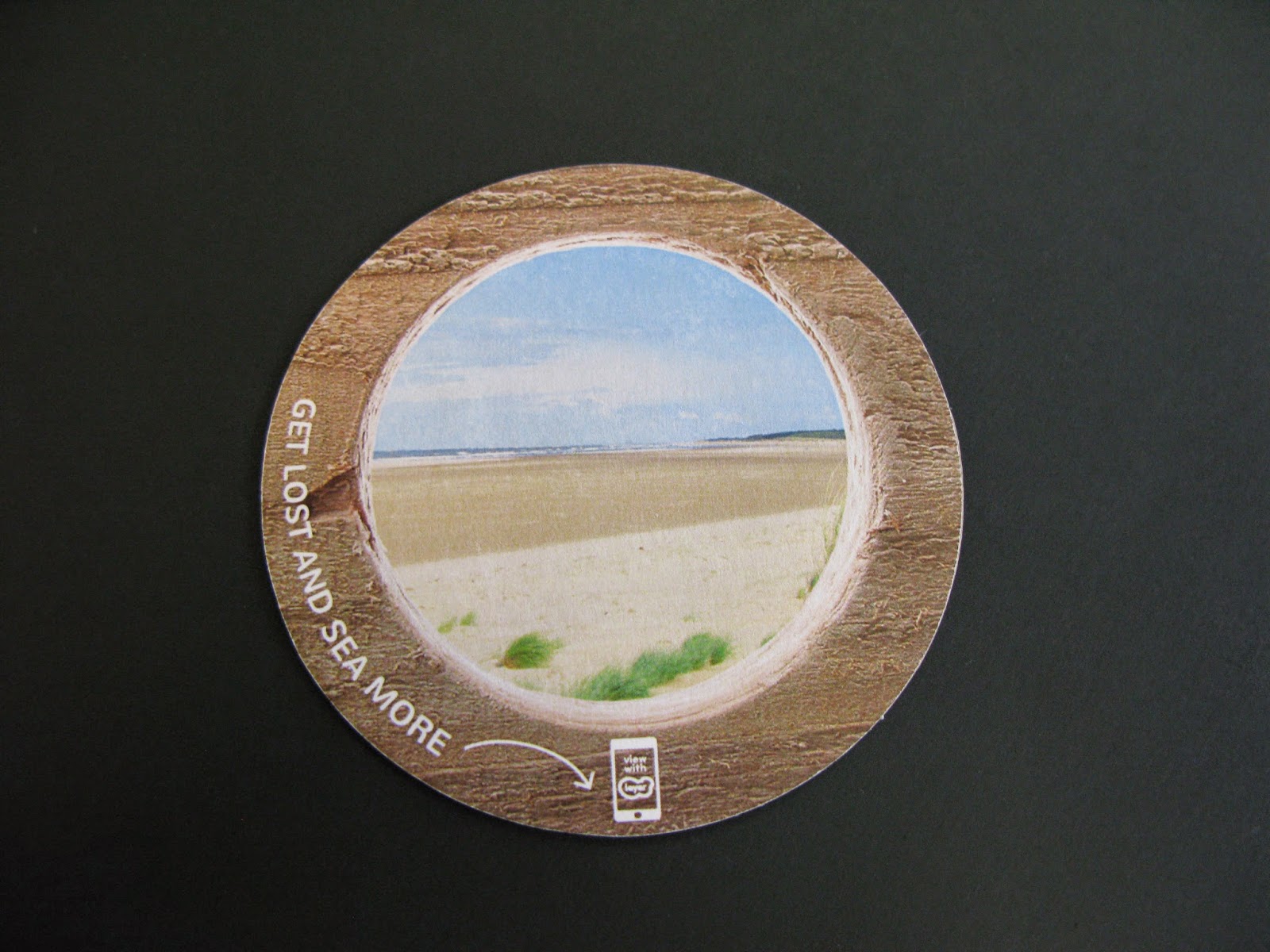 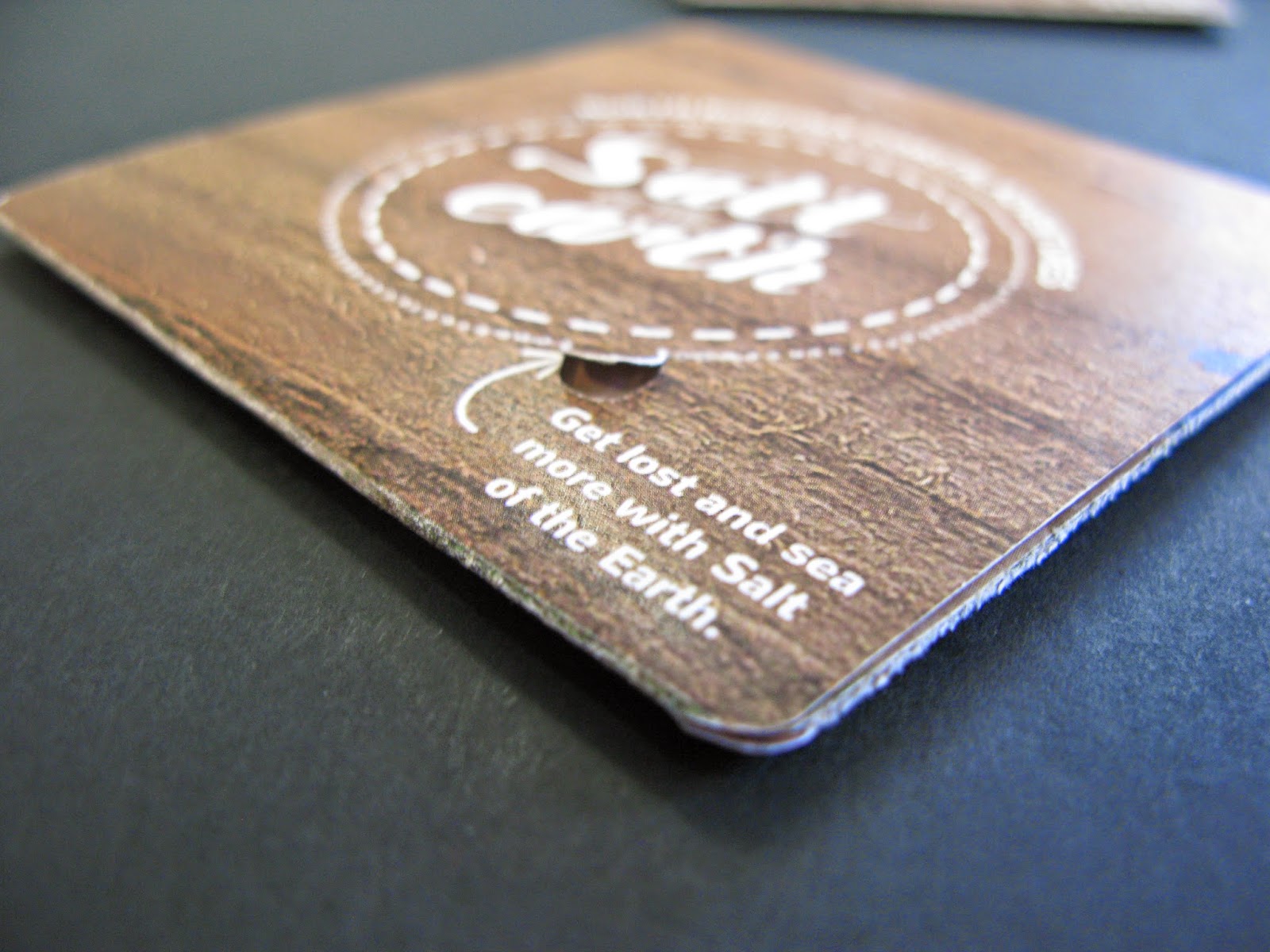 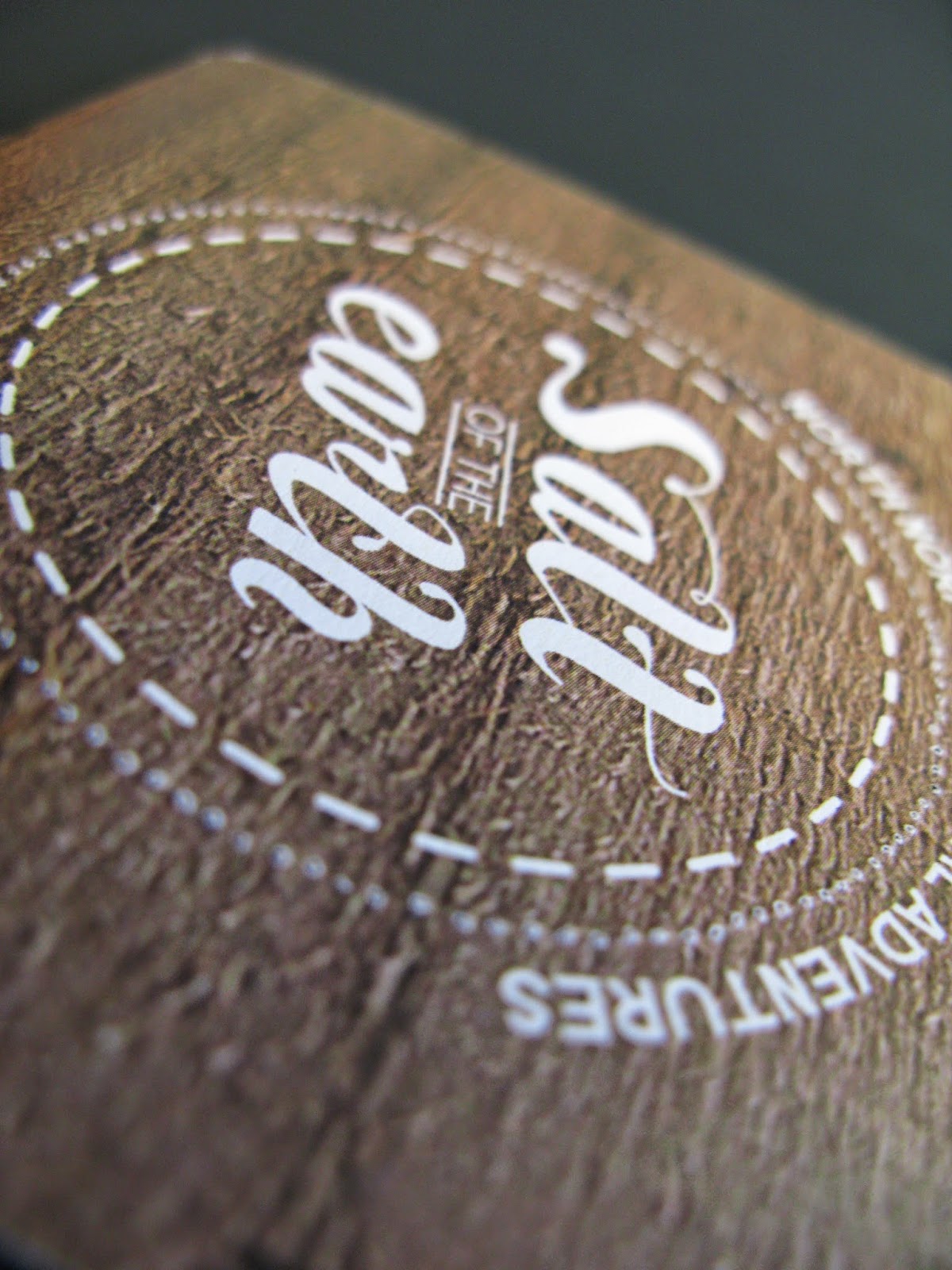 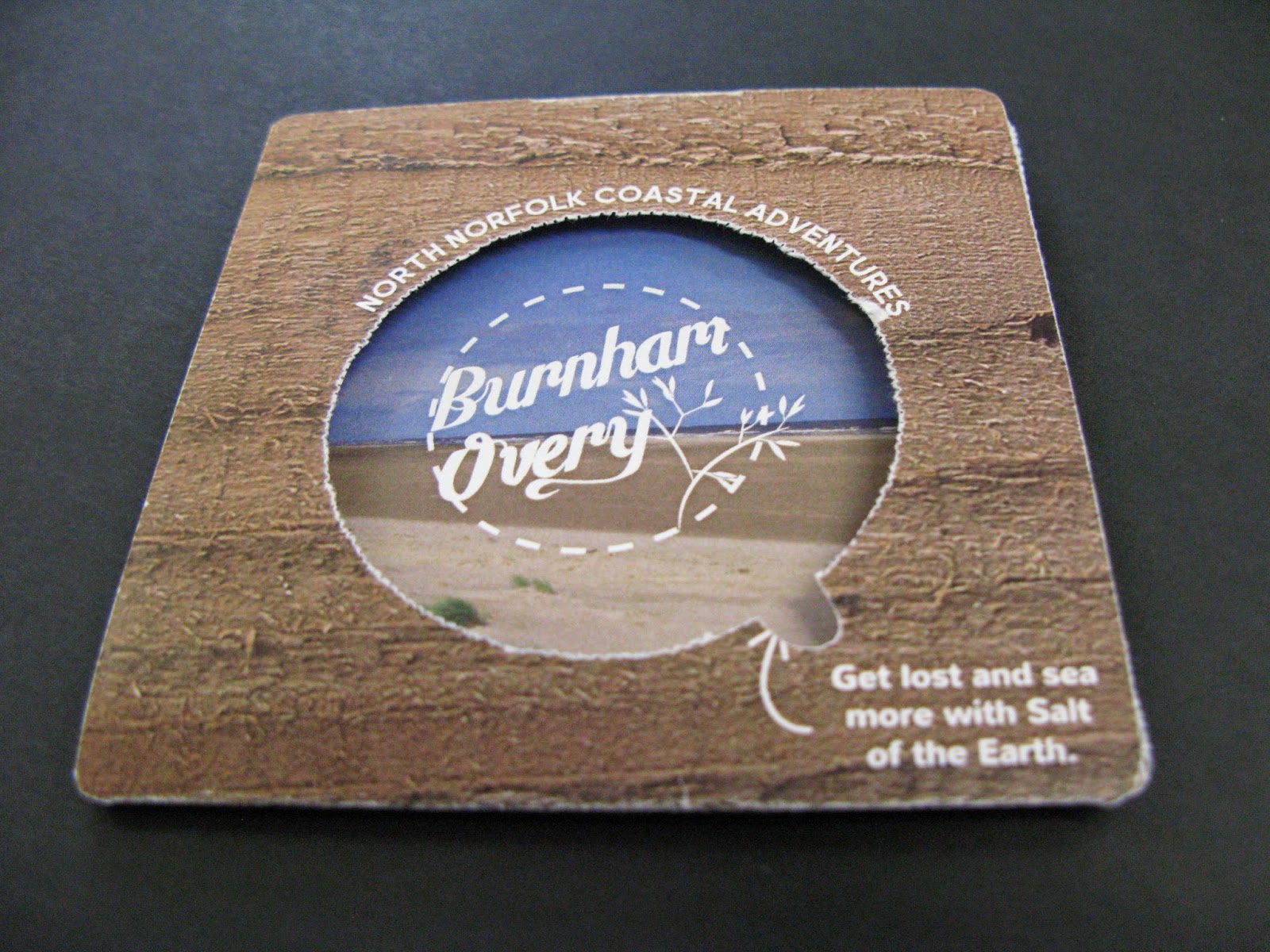 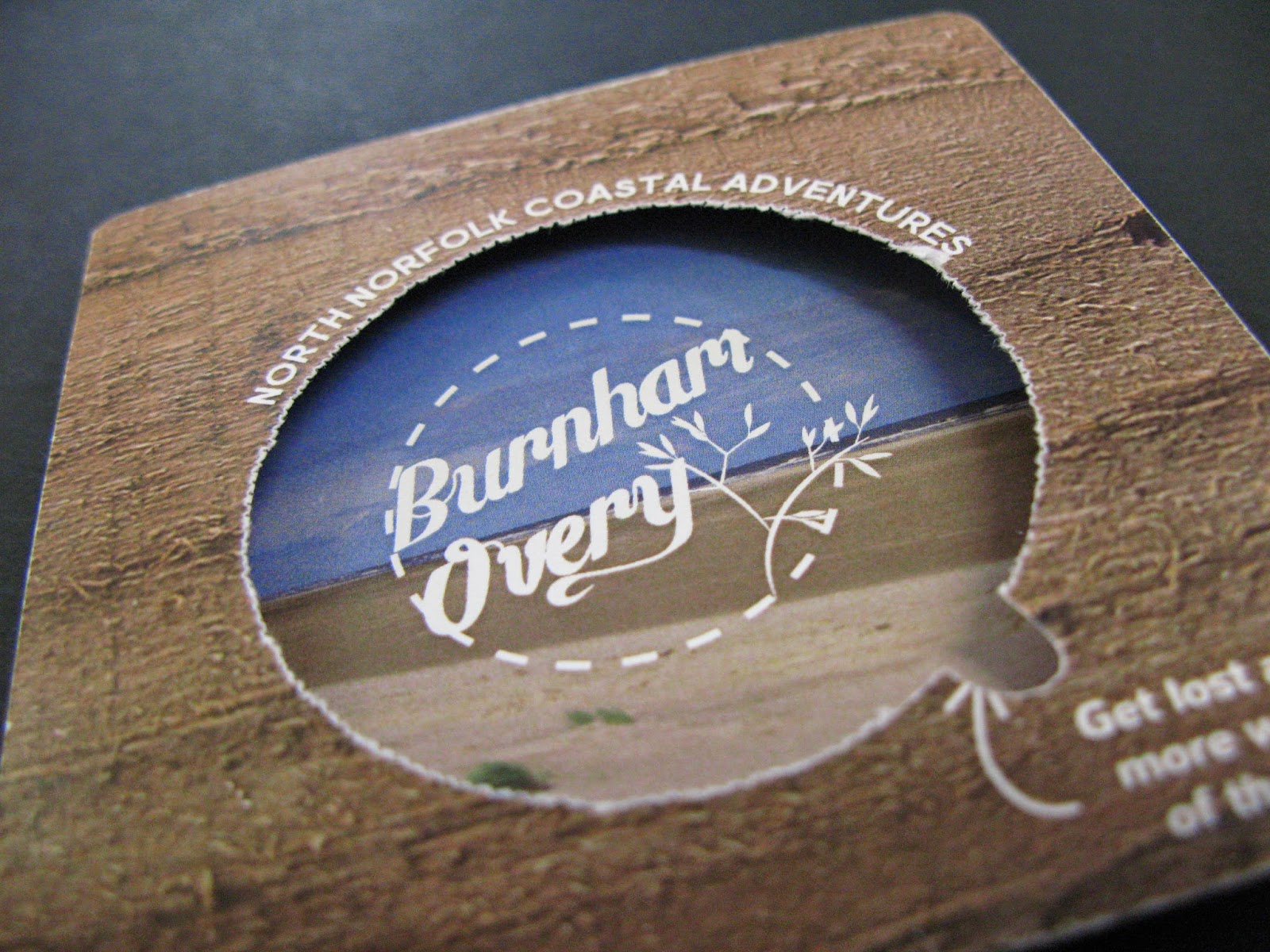 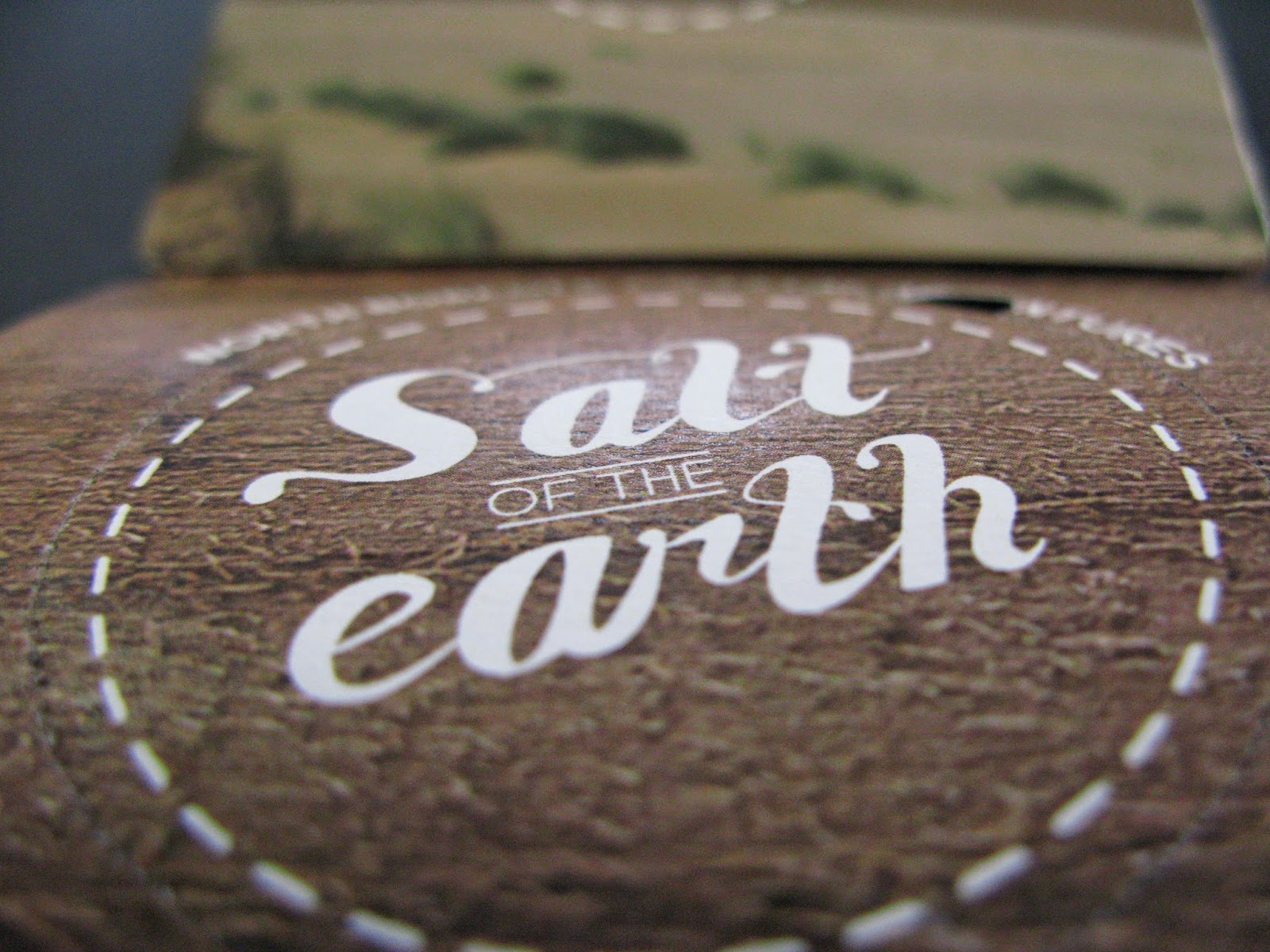 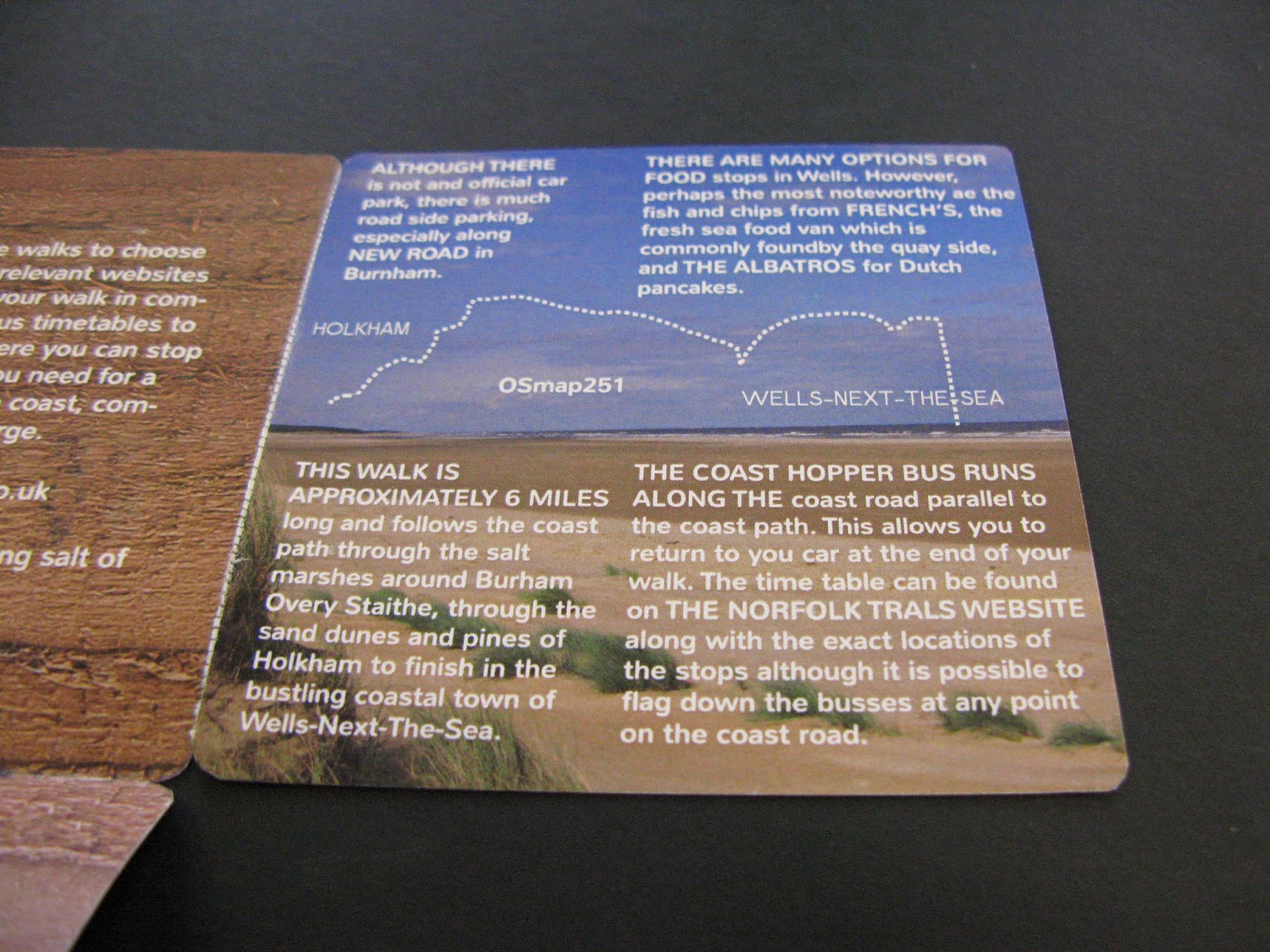 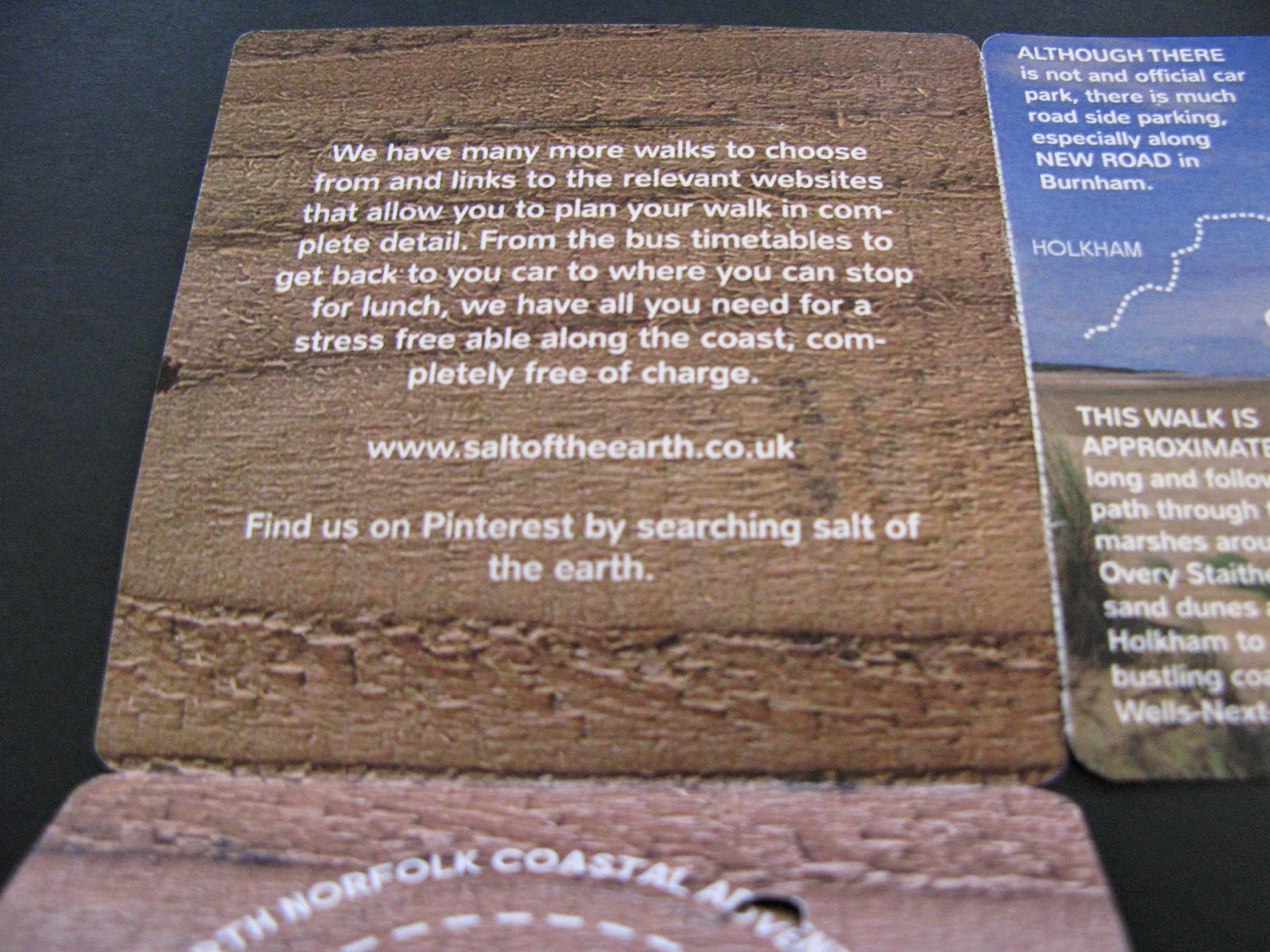 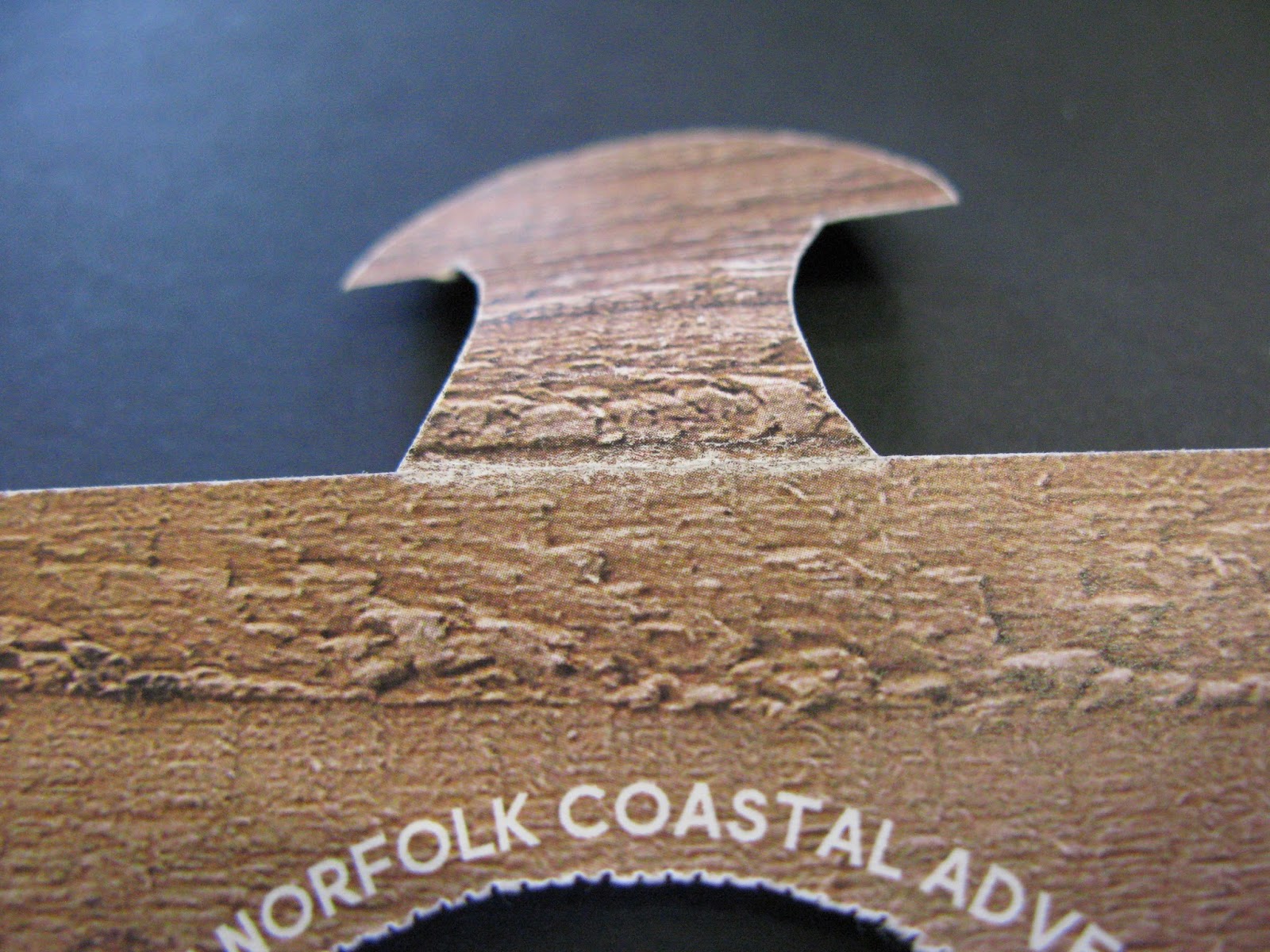 I found this brief quite difficult, both because I fell ill in the middle of it and the Christmas holidays sat directly over the end of the brief. This meant that I had to step away from the brief for a while, and when I returned to it, I was back at home, isolated from all the resources of college. You can say this is bad planning but when you are really ill you are incapable of thinking about these things. Considering these problems I am pretty happy with what I have managed to produce both in the restricted time frame and in these circumstances. Originally I had planned to do the salt lettering on the table sticker with the help of a laser cut acetate stencil but due to illness I missed my laser cut slot. So, when it came to producing the salt lettering for photographing I had to get a bit creative. I wish I could have really got it right and legible just by hand in the sugar granules, but I would have needed to produce it very large and then comes the problem of the ratio of scale between the granules and the letter forms; it may not have been recognisable but it wouldn't look right for the granules to be tiny in comparison with the letters, which is what would have happened had I done the design larger. This meant that I had to make considerable use of digital tools instead. It was difficult to find the balance between the legibility of the design and the texture of the granules but I think I just about managed it. The three dimensional look of the lettering is really interesting and creates the impression of spilled salt, just as I wanted it to. This is predominantly down to the photography and the decision to photograph on a neutral grey rather than black, this allowed me to maintain the shadows of the grains in later digital production. Photography is normally something that I really struggle with but this time the pinning down of exactly what I was using the photograph for and how I wanted it to look like really helped me to achieve it, rather than stabbing in the dark for something that might do. however the salt lettering is still something that I feel I could have done better with a bit of extra time and practice, I hope to pursue food lettering a skill later on.

Compared to this the other two print outcomes didn't pose as much a problem. However, the functionality of the magazine insert was quite difficult to achieve and could only be done through lots of trial and error and mock ups. Working out things such as the orientation of text and the order in which information is communicated proved to be most difficult to negotiate. In the end I think this is an interesting format choice because, rather than deciding the format and shaping the content around it. I think this produced something that performs its purpose in an interesting way, which contributes to its effectiveness as an advert. When it came to the coaster designs the main problem I encountered was a way to fit in the augmented reality design that was intrinsic to the overall purpose of the design, without it being a pointless gimmick relying on the technology to wow. I simultaneously considered augmented reality design for the other two print outcomes but felt that it just seemed to forced with them. Where as, with the coasters, the location of delivery (bars and cafes) meant that people would be more likely to have a moment to kill and the wifi to make a good use of the interactive element. I used an idea that had come up in a crit during the web design brief, which was that images of beautiful places make you want to visit them. So creating a location gallery that you view through the knot hole in the coaster seemed not only to have the best chance of getting people out on walks but also more engaging and informative than a pointless video or similar.

The visuals of the interactive element are also a strong link to the original website design. This link between the advertising campaign and the website design is something I set out to achieve from the very beginning. I am confident I have achieved this because I had to use a number of visuals, such as the logo and some of the landscape images. However, there is a tangible evolution of the aesthetic from web design to the printed format. Although I have brought over the visual theme of white vector graphics over images, I have brought in the close up image of the untreated wood. This addition of an image that has a much closer field of focus than the landscape image creates a greater sense of depth to each of the designs, creating a distinction between the digital design of the website and the tangible grounding in the physical that print inherently has.

The delivery format for each outcome was considerably limited by the location specificity of the website subject matter. In many ways I found that very useful because it really made me think about how the target audience would interact with my designs and where those young professionals would actually have a chance to interact with my interactive print. The instant two answers to this are: when they are socialising (cafes and bars) and when they are at home. What cemented these locations was the discovery that applications such as Layar needed good wifi to work at all. This in turn gave rise to each of the format choices.

As well as the augmented reality interaction the magazine insert has physical interactivity. The clear injection of thought into this aspect of the design instantly makes the insert more desirable. I also think it fits completely with the conceptual content of both the website and the other print outcomes. The way it gets readers to really do something physically, is exactly what the website is trying to achieve at a larger scale.

The commercial print possibilities of these outcomes are high, mostly because of the small numbers that would be needed to enact the campaign in real life. This means that digital print is feasible for all the outcomes. The only slight hitch would be the necessity of paying for the inserts to go into magazines and for cafes and bars to use the coasters and the table stickers  which is hard to predict without actually having to do.

Overall I am pleased with the outcomes for this brief, but do feel that little irritating errors such as typos could have been avoided if I had been at college for the duration of the brief and had the time to be really careful by printing tests and similar.